A Close Call in the Caucasus 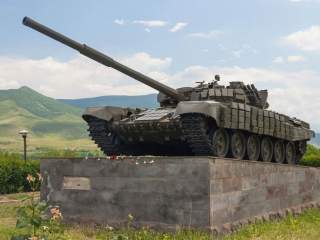 Most of the world wasn’t watching in early April when a new and destructive war very nearly broke out in the South Caucasus mountain range, an area encompassing Armenia, Georgia and Azerbaijan. But the war that didn’t happen is still a very real possibility, and if it does, the entire region could go up in flames over a parcel of land not much larger than the U.S. state of Rhode Island.

That verdant and contested piece of real estate is Nagorno-Karabakh, the storied “highland black garden” tucked into the foothills of the South Caucasus. Karabakh was the prize in an all-out war between Armenia and Azerbaijan as the Soviet Union crumbled in 1991 and the majority Armenian population of Karabakh declared independence. The conflict that emerged, lasting until 1994, cost newly independent Azerbaijan control of Karabakh, took roughly thirty thousand lives and sent hundreds of thousands of refugees fleeing from Karabakh and the surrounding districts. Today’s self-declared “Nagorno-Karabakh Republic” (NKR) is recognized by no one—not even its patron, Armenia—and has become a tiny, ethnically defined garrison state in the unenviable position of being under the constant threat of annihilation.

In short, Karabakh is cursed—as is the entire region—by geopolitics, ethnic and religious hatred, and the forces of nationalism and sovereignty. Just a few weeks ago, these forces came very close to blowing up the fragile pseudo-peace that has hung on by a thread for roughly twenty years. In the most serious violation of the cease-fire brokered in 1994 at the end of the war, the Azerbaijani army, in the predawn of April 2, launched a multipronged offensive that pushed back ethnic Armenian forces in what well could have spiraled into an out-of-control conflict.

After four days of intense combat and dozens of fatalities, the fighting diminished, and the two-decade status quo of “not peace/not war” had returned, more or less. But it’s clear, now that the dust has settled, that the dynamic has changed permanently. What is imperative is finding a way to avoid the wider war that nearly broke out, a conflagration that would have involved Armenians and Azeris by the thousands locked in a battle for survival. Such a war could easily drag in Russia, Turkey and Iran, igniting an arc of chaos and suffering stretching from the Black Sea to the shores of the Caspian in the largest armed conflict in Eurasia since the demise of the Soviet Union. Apart from the human cost, a major war would disrupt Europe’s small but politically important reliance on Azerbaijani oil via routes such as the Baku-Tbilisi-Ceyhan pipeline and throw into question Azerbaijan’s ambitions to ship large flows of natural gas to Europe in the future.

So what do we know and where do we go from here?

Very briefly, we can conclude the following from the fighting earlier this month:

• While accusations fly back and forth as to who broke the cease-fire on April 2, Armenia and the NKR have little incentive to begin an offensive since they control Karabakh and a large swath of the adjoining seven Azerbaijani districts that were taken in the first war. Further, Azerbaijan has been more eager to violate the truce in recent years. In 2010, shortly after the breakdown of peace talks, Azerbaijani troops launched an attack of unusual ferocity across the heavily fortified “Line of Contact” (LoC) that separates the military forces of the two sides. And in 2014, Azerbaijan shot down an Armenian helicopter flying parallel to the LoC. Despite the claims by the Azerbaijani government that the helicopter was on an attack vector, the available evidence indicated that the doomed helicopter had simply wandered into the no-fly zone.

• The quick movement of Azerbaijani army units in the first hours of the outbreak, and their ability to pivot and take territory, indicates a higher degree of readiness than at any time since 1994. This is a military that had long been dismissed as poorly trained, but early indications are that they can operate in a decisive fashion and achieve tactical gains. The Armenian and NKR armies are no doubt drawing similar conclusions.

• The purpose of the incursion was twofold: first, an opportunistic thrust to take a small sliver of territory and achieve at least a modest victory. But more than anything, this was a signal—that the Azerbaijani side has concluded that the status quo is unacceptable. Further negotiations will be conducted from a position of strength that they would not have previously enjoyed. At least that’s the perception from Baku, even if the overall military situation has not changed fundamentally. The critical corollary message is that the Azerbaijani side has also decided that the long mediation process sponsored by the OSCE Minsk Group (an ad hoc diplomatic effort sponsored by the Organization for Security and Cooperation in Europe, and cochaired by Russia, the United States and France) has run its course. For Baku, the underlying premises of the Minsk Group process must change if it is to survive.

In a way, the Azeris are right: if the peace process is to continue, certain fundamental and even radical changes must take place in short order. And while agreement to the suggestions below will require an enormous effort, the alternatives are more incursions, with counterattacks, escalation and the possibility of a regional war of mammoth proportions and catastrophic consequences.

I would suggest that the Minsk Group use all the tools at their disposal (including a variety of carrots and sticks) to achieve the following:

• A commitment from both sides to agree on implementation of the so-called “Madrid Principles” put forward by the OSCE Minsk Group in 2007. This includes Armenian withdrawal from the seven occupied districts surrounding Karabakh, as well as an eventual referendum on its final status.

• Widen the LoC into a substantial demilitarized zone (DMZ). Both sides begin the withdrawal of heavy weapons including artillery, tanks, and air support.

• Bolster the current handful of OSCE monitors to a contingent of at least one hundred. They would have mobility inside the new DMZ and would inspect troop movements and investigate cease-fire violations by both sides.

• Stiff penalties involving economic and other sanctions for parties who violate the cease-fire.

• Serious consideration that the NKR be admitted as a partner in future peace talks.

• Finally, a pledge that both sides are willing to consider all noncoercive options, including land swaps, to bring about a just and lasting settlement. The last two conditions are the most difficult nut to crack, but they may be the key to a permanent peace.

The land-swap idea has a checkered past, and its best-known version is the “Goble Plan,” put together by in 1992 by Paul Goble. Credible stories have circulated that Azerbaijan’s late president Heydar Aliyev (father of current president Ilham) was in favor of giving up Karabakh before and after talks sponsored by the United States at Key West in 2001. In such a scheme, the concession of Karabakh proper on the part of Azerbaijan would be reciprocated by the Armenian side yielding all or most of the Meghri area, thus giving Azerbaijan direct access to its exclave of Nakhchivan. Such a trade would be part of a larger deal including Armenian withdrawal from the seven occupied districts surrounding Karabakh and so-called “special modalities” for the districts of Lachin and Kelbajar. The story of the failure of this elegant but painful solution is obscured by history and denials, but it is surely time to resurrect it and other alternatives to both war and the status quo.

The future referendum on whether Karabakh will rejoin Azerbaijan, remain independent or choose some other option has been the elephant in the room for many years. Who will vote: all of Azerbaijan, or only those who reside in Karabakh? The Azeris insist on the former, but the Minsk Group hinted in 2006 that they envisioned such a referendum as taking place in Karabakh only. In any case, the vote on Karabakh’s final status is almost rendered a moot point once the land-swap principle becomes a mutually accepted ingredient.

Heavy weapons such as long-range artillery, tanks, mortars and air support must be withdrawn from areas adjacent to the LoC. Following this, the LoC should be widened and demilitarized. A large number of mobile observers from the OSCE should be deployed, with the capability to detect violations and verify compliance. The enlarged OSCE observer mission should have a legal and forensic component capable of investigating allegations of war crimes and other human rights violations that take place during any future outbreaks of armed conflict between the two sides.

This is not synonymous with a peacekeeping force, which would be a component of the final peace settlement. Such a force (operating with a mandate from the OSCE or the UN) would be sufficiently large, capable and armed, and consist of military and civilian personnel from outside the region. Thus, there would be no contributions from Iran, Russia or Turkey. As a show of good faith, and to avoid arousing suspicions of interference, the United States would also not participate.