Closer to Inferno: The Danger of Lebanon’s Political Impasse 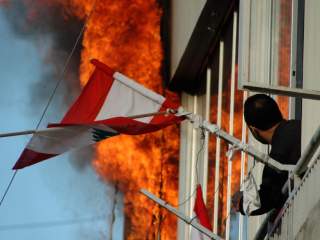 With no progress in Yemen, many have come to see Lebanon as the low-hanging fruit with which Tehran and Riyadh could begin rapprochement, based on their prior willingness to cooperate on that part of the region. In December, David Ignatius was hopeful that a deal to fill the vacant Lebanese presidency drew near and that a potential agreement on this issue between Iran and Saudi Arabia could push the Middle East “away from the inferno.” Fast-forward two months: unfortunate developments have seemingly tilted the region even closer to the inferno.

It is unclear how and when the presidential deadlock will be resolved. What seems more obvious is that traditional external guarantors of Lebanon’s local stakeholders are either unable or unwilling to meaningfully shape Lebanese domestic politics. On that basis, and at a time when Riyadh and Tehran are consumed by the crises in Syria, Yemen and Iraq, it seems unlikely that they would now look to Lebanon as an area to take confidence-building measures. This places greater burden on, and to some degree increased flexibility for, rival Lebanese power centers to reduce local tensions and respond to an array of problems plaguing Lebanon.

Lebanon’s unique power-sharing political structure has failed to agree on a new president, constitutionally mandated to be a Maronite Christian. Since the departure of Michel Suleiman in May 2014, Lebanon’s parliament has met over thirty times but has been unable to fill the role of the presidency. This has largely been due to divisions between all mainstream parties, in addition to Hezbollah’s tactics aimed to block the quorum necessary to elect a president.

December saw a surprising proposal for the presidency: Suleiman Franjieh, the Maronite Christian leader of the Marada Movement (part of the March 8 Alliance), who retains close ties with Syrian President Bashar al-Assad. Meanwhile Saad Hariri, the Sunni leader of the Future Movement party (member of the Saudi-backed March 14 Alliance) would take up the role of prime minister. Hariri is widely believed to have had an extensive role in brokering the Franjieh deal with the blessing of Saudi Arabia and, reportedly, the United States. Hariri’s rare return to Lebanon from France on February 14, on the anniversary of his father’s assassination, reasserted his backing for Franjieh and his somewhat forgotten relevance to the political game.

Meanwhile, Hezbollah has long supported Michel Aoun’s bid for the presidency. As head of the Maronite Free Patriotic Movement (aligned with March 8), Aoun has maintained a strategic alliance with Hezbollah for over a decade. In January, Samir Geagea, chairman of the Christian Lebanese Forces party (aligned with March 14) came out in support of Aoun rather than backing Franjieh and Hariri. While this move was surprising, given the wartime animosity between Aoun and Geagea, their common enmity towards Franjieh likely triggered a realignment of convenience. These shifts have driven a wedge between members of March 8 and March 14, and weakened their position vis-à-vis Hezbollah.

In late January, in a much-awaited speech, Hezbollah’s leader Hassan Nasrallah reaffirmed the party’s continued support to Aoun. At the same time, Nasrallah was attentive to Hezbollah’s close relationship with Franjieh and stated that the decision to back Aoun did not mean Franjieh was undeserving of the presidential spot. While stressing “ethical and political commitment” to Aoun, Nasrallah also noted that it would consider backing another candidate if Aoun voluntarily withdrew.

It is unclear exactly why Hezbollah has not been lured into backing Franjieh. Some circles believe that it backtracked on a tacit agreement with Sunni leaders because of Iranian pressure to maintain the alliance with Aoun, or simply to fly in the face of Riyadh’s choice and weaken March 14. Another narrative is that given the shifts of momentum in Syria and its implications for Hezbollah’s positioning in Lebanon, Iran and Hezbollah collectively decided to drag their feet on the presidency issue until they achieve a more concrete outcome in Syria.

Others look to personal loyalties driving Lebanese politics. Given Aoun’s stance during the 2006 war with Israel and driving Christian support to Hezbollah at the height of the Syrian conflict in 2013, some perceive Nasrallah as fulfilling a debt owed to Aoun. At the same time, Hezbollah has shown pragmatism and willingness to engage in dialogue with the Sunni leadership and has not outright spurned Franjieh for his candidacy. Going forward, two overarching alternatives seem open to Hezbollah.

On the one hand, Hezbollah could delay a final decision in a bid to drive up the price of its support. Since the choice between Franjieh and Aoun is a win-win for Hezbollah, it can afford to wait until Aoun consolidates enough support or Franjieh offers an attractive bargain. For now, the disunited opposition has little leverage to apply against Hezbollah. This factor, together with Hezbollah’s recent gains in the Syrian conflict and its preexisting security edge in Lebanon, could persuade Hezbollah that it can use its position of strength to obtain maximum concessions in exchange for changing the status quo. As part of this, Hezbollah is likely to seek a more prominent role across Lebanese state institutions, although the opposition seems strong enough to reject demands that would substantially weaken the Taif and Doha agreements.

An alternate, but less likely, outcome is that Hezbollah will choose decisive action sooner rather than later, to avoid missing the opportunity to capitalize on a friendly presidency. While internal breakdown between the March 8 and March 14 camps has so far boosted Hezbollah’s position, it has also allowed for creative realignments and renegotiations that could be used to counter Hezbollah. To outmaneuver its opposition, Hezbollah may calculate that it is in its interest to back the candidate who would carry enough votes to produce a presidential result most allied to Hezbollah’s current strategy in Syria.

Lebanon’s current power vacuum has weakened an already fragile central government. This month Lebanon's Justice Minister quit the Cabinet in response to what he saw as growing domination by Hezbollah and weakening alliance with Arab states. These internal struggles have further paralysed the Lebanese state in providing basic services to its public (a long-standing reality), countering endemic corruption levels, responding to growing hostility with Islamist factions and managing the absorption of over one million Syrian refugees, the majority of whom are Sunnis that are likely to permanently alter Lebanon’s demography. This toxic mix has left many questioning when, not whether, Lebanon’s resilience will shatter from within.

Iran and Saudi Arabia could deploy their influence across the Lebanese establishment, to either prolong or settle the presidential stalemate. However, both regional powers currently have other pressing priorities and have in recent years scaled back their direct involvement in Lebanese domestic politics. Faced with economic problems, Riyadh has cut substantial funding to, and downsized its engagement with the Lebanese Sunni leadership since the Yemen conflict. It is widely perceived that given the demands on Hezbollah abroad in the Syrian conflict, Tehran has given greater space to Nasrallah to manage tensions at home. Moreover, Iran’s diplomatic bandwidth in the region has been absorbed by Syria.

If the region’s rival powers share the common objective of preventing further instability in Lebanon and avoiding a greater ripple effect in the Syrian conflict, the time is ripe for taking constructive steps in this direction. But in a period when purses are tightening, and world and regional powers are consumed by the conflicts in Syria and Yemen, there is little hope that the sort of serious diplomatic attention Lebanon needs and deserves will be forthcoming. Under this reality, unless domestic factions can make necessary trade-offs to overcome this impasse, Lebanon’s resilience will be tested more than ever.

Ellie Geranmayeh is a policy fellow for the Middle East and North Africa Programme at the European Council on Foreign Relations.