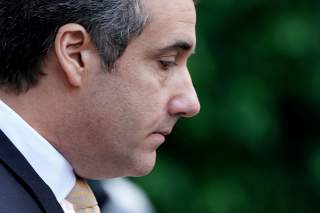 The plea agreement by Michael Cohen in a Manhattan courtroom on Thursday marked a new and perilous stage in the presidency of Donald Trump. Trump had been focused on Paul Manafort for several days and indicated that he wasn’t ready to preclude pardoning him. Then came the Cohen plea deal. Suddenly, Manafort started to look like small potatoes next to Trump's former personal lawyer.

There was no gainsaying the significance of Cohen, though Trump did his best to disparage him. Cohen, who worked for Trump, or “Individual 1” as he was named in the plea agreement, for over a decade, was, in essence, his personal fixer, the guy who got things done, whenever and wherever Trump wanted. And Trump had a lot of wants. It was Cohen who, among other things, helped arrange secret payments to Trump’s paramours to ensure their silence during the 2016 election. Now Cohen, who had previously said that he would take a bullet for Trump, has become an essential witness for Special Counsel Robert Mueller, who personally signed the plea agreement. In addition, Senator Richard Burr, the head of the Intelligence Committee, announced on Friday that the committee has made several referrals of individuals for lying before it to Mueller and that “It’s a loud message to everybody that is interviewed by our committee, regardless of where that prosecution comes from: If you lie to us, we’re going to go after you.”

It appears that the Trump Organization was indeed trying to construct a luxury tower in Moscow and contemplated offering Russian president Vladimir Putin a $50 million penthouse apartment—a gift that he would surely have refused, but is testimony to the sheer mediocrity of many of Trump’s closest associates who were operating way out of their league.

In the agreement, Cohen stated that he was guilty of lying to Congress in August 2017 on a variety of fronts. He said that negotiations on building a Trump tower in Moscow were conducted through the summer of 2016—not the earlier date of January 2016 he had previously declared to Congress. Lying to Congress is a felony. Cohen’s admission will now focus more attention on the testimony of Donald Trump, Jr. to Congress about a tower in Moscow. It has also drawn a renewed focus on Trump’s repeated asseverations that he had no business ties to Russia during the 2016 campaign: “Russia has never tried to use leverage over me. I HAVE NOTHING TO DO WITH RUSSIA - NO DEALS, NO LOANS, NO NOTHING!”

The contention of the many critics of Trump’s dealings is not only that he was seeking to monetize the presidential campaign, but that the failure to disclose his negotiations meant that the Kremlin had secret information about him. Michelle Goldberg, a New York Times columnist, states that the plea deal is proof that the Kremlin has the potential to exercise influence over Trump: “we can see that Putin has been in possession of crucial information about Trump’s business interests that the president deliberately hid from the American people.” According to Vox, “Michael Cohen’s plea deal for making false statements to Congress doesn’t just indicate that he lied about the Trump Organization’s attempt to get a real estate project off the ground in Russia—it also indicates that the Kremlin helped in the cover-up.” In August 2017, Dmitry Peskov, Putin’s press spokesman, stated that the Kremlin had not responded to any inquiries from Cohen: “This email said that a certain Russian company together with certain individuals is pursuing the goal of building a skyscraper in the ‘Moscow City’ district, but things aren’t going well and they asked for help with some advice on moving this project forward. But since, I repeat again, we do not react to such business topics—this is not our work—we left it unanswered.” Now Cohen alleges that he did in fact have a series of telephone contacts with the Kremlin.

Trump has responded by deeming Cohen a liar and “weak.” He has also maintained that since the odds of his winning the presidency were always iffy, there was no cogent reason he shouldn’t have sought to keep his options open in Moscow. At other points, he has sought to diminish the importance of his maneuverings in Russia. Today, he tweeted, “Oh, I get it! I am a very good developer, happily living my life, when I see our Country going in the wrong direction (to put it mildly). Against all odds, I decide to run for President & continue to run my business-very legal & very cool, talked about it on the campaign trail...”

If federal prosecutors are able to work unmolested, Trump's towering ambition may have the potential to unravel his business empire as well as his presidency. Trump has wriggled out of a series of financial catastrophes in the past that would have felled most businessmen and ascended to the presidency, defeating both the Clinton and Bush dynasties at one fell swoop. Now he confronts his greatest challenge. Right now, he is being pummeled relentlessly. But as Trump knows, the best defense is a good offense. Unless he can mount one, his presidency will come to a premature terminus.