Cohen Testimony is the Beginning of the End of Russiagate 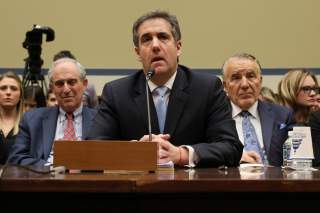 “Pretty bad,” a former senior administration official told me Wednesday on Michael Cohen’s unsparing testimony to the House Oversight Committee. “Our side needs to stay classy.”

In hours of testimony, Cohen, the former personal lawyer of the president of the United States, described a presidential campaign that he didn’t expect to win, and a business operation that flouted accountability. In the proceedings’ most consequential developments, Cohen declined to rule out that his victory-minded former employer would work with Moscow and intimated personal involvement by the president in his former business while in office.

Cohen tried to describe his former boss to those gathered and watching in terms befitting the unique political phenomenon that has captured American politics for almost four years. “Mr. Trump is an enigma,” said Cohen. “He is complicated, as am I. He has both good and bad, as do we all. … But the bad far outweighs the good, and since taking office, he has become the worst version of himself.”

Trump’s surrogates quickly denounced the testimony as not enough to land a blow.

“Michael Cohen is a felon, a disbarred lawyer, and a convicted perjurer, who lied to both Congress and the Special Counsel in a ‘deliberate and premeditated’ fashion according to the Special Counsel’s Office,” said Kayleigh McEnany, national press secretary for the president’s re-elect effort. “Now he offers what he says is evidence, but the only support for that is his own testimony, which has proven before to be worthless.”

At core, Republicans drew Cohen into a stalemate, forcing Cohen to concede that he would not rule out pursuing a future book deal, or television show, or even a run for New York political office, as the ex-attorney has gained a cult following among some on the Democratic left.

Disturbing for the president’s defenders was Cohen’s intimation that Special Counsel Robert Mueller may have evidence corroborating that former unofficial advisor Roger Stone and then-candidate Trump discussed Wikileaks and Stone’s conversations with its outlaw frontman Julian Assange; if so, it’s possible the president has committed perjury.

But above all, Cohen failed to provide a smoking gun to shift the paradigm going into Wednesday’s much-anticipated hearings. There were theatrics galore, including an interchange with Rep. Debbie Wasserman Schultz, chair of the Democratic National Committee at the time of the Russia hacks in summer 2016. But Cohen failed to provide concrete new evidence that Trump in any way colluded with a foreign power; he argued, instead, only that Trump has a moral character depraved enough to not be above it. “He is capable of behaving kindly, but he is not kind. He is capable of committing acts of generosity, but he is not generous. He is capable of being loyal, but he is fundamentally disloyal,” Cohen said. That’s rich for many Republicans. Less than a year ago, last April, Cohen tweeted: “A person who deserves my loyalty receives it.”- Joyce Maynard I will always protect our @POTUS @realDonaldTrump #MAGA.”

The optics of Cohen’s appearance were criticized by some, with another source in the White House orbit mocking Cohen allowing Lanny Davis, Cohen’s attorney and a longtime Clinton consigliere, to be seated right behind him. Wednesday represented another distressing testimony to the moral fiber of the occupant of the White House, but Cohen’s testimony failed to shed any new light on a broader criminal–or treasonous–scheme by the president himself.

The likeliest path remains: the results of Special Counsel Robert Mueller’s investigation will show that the most spectacular externalities conceived of were exaggerated. Mueller’s results are most likely to provide a roadmap for future investigations—criminal and political—of Trump and his circle, whether that be in New York state, or the House of Representatives.

Trump may yet be impeached—hardline members of the House Democrats called the possibility “inevitable” Wednesday. But so far, the scandal is more Whitewater, than Watergate. The president, underwhelming in discretion in his personal life, is nonetheless more Bill Clinton than Richard Nixon. At an approval rating at or north of 40 percent, and presiding over a rip-roaring economy, the president remains closer to re-election than ruination, to the chagrin of an ever-expanding list of enemies. But Donald Trump’s not going anywhere soon.