The Cold War Choice (with China) 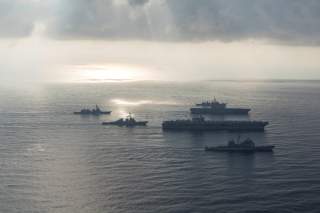 The current atmosphere in U.S.-China relations recalls the early years of America’s long confrontation with the Soviet Union—and not only because the phrase “cold war” is increasingly used with abandon. Then, as now, a conciliatory Washington, DC consensus was breaking apart in the face of apparent Eurasian treachery. Then, as now, U.S. government policies and pronouncements began to reflect and respond to the requirements of confrontation, rather than cooperation. And yet, as a newly adversarial poise crystallizes in the bipartisan collective consciousness of the Beltway, it is worth highlighting a crucial difference: back then, Americans had a clearer choice.

Between the end of World War II in 1945 and the start of the Korean War in 1950, America retained an institutional bias against interventionism. The Truman Doctrine, George Kennan’s “X Article,” Winston Churchill’s “Iron Curtain” speech in Fulton, Missouri, and Secretary of State George Marshall’s Harvard University speech outlining the European Recovery Program were rhetorical volleys designed to provoke nationwide debate and spur a traditionally insular political system to assume long-term international responsibilities. Concurrently, prominent political figures voiced skepticism of foreign entanglements. On the left Henry Wallace, FDR’s second vice president and Harry Truman’s first commerce secretary, publicly broke with the White House over its confrontational policies toward the USSR. On the right Senator Robert Taft of Ohio nearly won the 1952 Republican presidential nomination on a platform of non-interventionism and opposition to NATO.

Back then America had to be convinced to fight for anything. Today it is already committed to fight for everything. The habits of mind of the organizations we created to grapple with Soviet power are strongly biased in favor of the political and military defense of an expansive status quo. In particular, the primacy of deterrence in American strategic thought has sapped its foreign policy of nuance and flexibility, precisely the qualities necessary for coping with international change. Absent a dynamic and informed elected leadership, we are on a semi-automated course towards global confrontation with an emerging Sino-Russian entente. The 2017 National Security Strategy clearly points in that direction, yet there are no presidential speeches exhorting the nation to action. Additionally, there are no mainstream politicians calling for restraint. We deserve as spirited a national debate about the wisdom of this competition as we had in the late 1940s. Four considerations make skepticism the proper starting point in this debate.

First and most important is recognizing that we were lucky to avoid nuclear disaster during the Cold War. New histories reveal that the Cuban Missile Crisis and the 1983 Able Archer exercises brought us closer to the edge than was understood at the time. It is easy to imagine that an intense geopolitical competition with China could lead to similar episodes over Taiwan or Korea. Given that a nuclear war is one of the only events that could destroy our country, we should be extremely reluctant to run nuclear risks on behalf of all but the most existential national security goals.

Second, there is a real trade-off between guns and butter. Cold War America spent between 5 to 10 percent of annual output on defense in an era of buoyant productivity growth and low public debt to GDP ratios. Despite this fiscal breathing room, high defense spending contributed to inflation in the Vietnam-era and big budget deficits in the Reagan-era. The U.S. government now has much less fiscal leeway to prosecute a geopolitical competition. Although defense spending is now only a little over three percent of GDP, the net public debt is nearly 80 percent of GDP. The Congressional Budget Office estimates that tax cuts, lower productivity growth and an aging population will push it past 100 percent by 2028. Raising defense outlays will either force us to make immediate cuts to domestic services or compromise our long-run prosperity through higher taxes or a larger public debt. Whether or not you believe America is in for an acute fiscal crisis, resource tradeoffs will be more apparent than during the Cold War.

Third, a new long-run security competition is likely to erode our liberty. America’s last two major foreign-policy orientations, the Cold War and the War on Terror, led to the creation and empowerment of a permanent military-intelligence apparatus which now possesses unprecedented powers of surveillance and coercion. There is every reason to believe that a new long-run political-military competition with China would cause the U.S. government to acquire even more such powers. Our founding creed cautions us to be intensely skeptical of concentrated state power. We should subject any new justification for its expansion to careful and sustained scrutiny. Governments seldom give up powers, once acquired.

Fourth, a clear “victory” like the one we enjoyed in the Cold War may not be forthcoming. The United States was more powerful than the Soviet Union at every stage of the Cold War. We easily outspent and out-innovated them. CIA estimates of the Soviet economy suggest that it was never more than two-thirds the size of America’s. China’s annual output has already reached parity with the United States. It surpassed us in terms of industrial output in 2010. China faces enormous demographic and financial problems, but the central role of market incentives in its economy means it is unlikely to suddenly fall off a cliff. We know a lot more about the Chinese economy than we knew about the Soviet economy and what we know should make us wary of engaging them in a struggle of attrition.

Given the legacy of the original Cold War and the contours of emerging power realities, Americans should demand a detailed and sustained rationale from those who argue that America needs to engage in a prolonged security competition with China. Invoking the “rules-based international order” is not good enough. The original Cold War engaged not only our blood and treasure, but also our way of life. It helped shape multiple generations of Americans and left an indelible mark on our culture. What are the requirements of U.S. national security and how are they threatened by China? How should we respond? What are the likely costs of that response in terms of dollars, lives, and the risk of a nuclear war? These questions need an honest and open national debate.

In the late 1940s America’s political system made a deliberate choice to engage in a Cold War with a Eurasian power. Its relative geographic isolation still affords it that choice. Americans need to insist that their representatives offer them a choice apart from reflexive military defense of the status quo, rather than standby while the choice is made for them by the bureaucratic and intellectual inertia of the institutions we set up to confront the Soviets.

Evan Sankey is a research analyst at the Johns Hopkins University Paul H. Nitze School of Advanced International Studies. He received his MA from SAIS in 2016.