Collective Security Is America's Only Hope 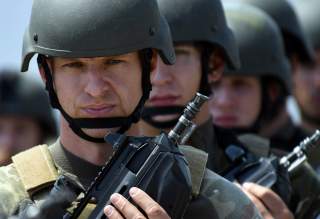 MAJOR-POWER competition is back. Russia’s annexation of Crimea, its subversive actions in eastern Ukraine, and its belligerent actions, rhetoric and nuclear signaling toward many European countries and the United States have forced members of the North Atlantic Treaty Organization (NATO) to refocus much of their activities on improving deterrence of Moscow. Similarly, China’s increasingly assertive actions in the East and South China Seas, and elsewhere, are driving the United States and its Asian allies to discuss ways to strengthen deterrence of Beijing. Over the past few years, a considerable amount of work has begun in Washington and beyond to find solutions to these important problems, because, while Russia and China are different actors (the former is a declining power and the latter a rising power), they are the only two states capable of challenging the United States militarily, both now and in the foreseeable future.

Focusing on strengthening deterrence is not enough, however. As Alexander George and Richard Smoke explained in their seminal 1974 book Deterrence in American Foreign Policy, the success of deterrence should be judged on the time it has bought to improve the circumstances that made it necessary in the first place. Plainly, while deterrence may sometimes be necessary, it should only be temporary, and should never be the end goal. That’s important because, as strategic scholarship of the late Cold War has shown, deterrence is an incredibly difficult endeavor. In the current security environment, it has become even more challenging than it was during the Cold War, because there are more nuclear-armed states and many more technologies and domains of strategic consequence.

The implication is that while the United States may have to strengthen deterrence of Russia and China in the near term, it should also make sure that it devotes time and energy to reflect on the strategic relationships it wants to (and can) have with them in the longer term. The United States, in other words, should work to identify realistic visions for its relationships with Russia and China.

That requires answering several fundamental questions, including: What should be the United States’ goals with both Russia and China, and with each individually? What is the best strategy to reach these goals? What approach should the United States adopt, and what tools should it use? What are the place, roles and responsibilities of U.S. allies and the “in-between states,” i.e., countries such as Ukraine or Belarus in Europe, and Vietnam or Myanmar in Asia? More generally, what are the implications for security in Europe and Asia, the two theaters most directly exposed to the waves of changing U.S.-Russia and U.S.-China relations?

A review of the analytical literature suggests that, along a continuum of options, two models stand at opposite ends. The first, which has undergirded much (not all) of U.S. policy since the end of the Second World War, suggests that every effort should be made to maintain and even strengthen U.S. primacy in today’s international order, notably in Europe and Asia. The other contends that the United States should abandon primacy, scale back its leadership role, and accommodate Russia and, especially, China by conceding power to them, especially in their close neighborhoods.

Both the primacy and accommodation models, however, have important shortcomings. So do “selective engagement” and “offshore balancing,” the two oft-advanced alternative models. Looking to the future, a more promising avenue to secure U.S. long-term security interests in Europe and Asia may be for Washington to develop regimes for implementing collective-security arrangements.

THE CONVENTIONAL wisdom in the U.S. strategic community is that the United States should maintain its preeminence in the current liberal international order. In practice, that means preserving the United States’ unequaled military capabilities, alliance commitments and privileged positions in international institutions, and it means that Washington should be prepared to use various tools, including military tools if necessary, to counter all threats to that order—sometimes even before they materialize.

According to this model, the primacy of the United States and its leadership role in the world, which has existed since the end of the Second World War but emerged fully after the collapse of the Soviet Union and the end of the Cold War, should be preserved because it has proven its worth in keeping the peace with Russia, China and others. Some “primacists” even believe that there is no viable alternative to Pax Americana. As Bret Stephens puts it in America in Retreat, “the alternative to Pax Americana—the only alternative—is global disorder.” Primacists also believe that their approach is essential to the functioning of the international economic system, contending that it plays a key role in helping to maintain an open world economy and giving Washington leverage in economic negotiations. Finally, and significantly, primacists stress that there is a widespread demand for Pax Americana—in other words, that Washington does not impose it on any country, but rather that Pax Americana rests on alliances between willing partners, because, at its core, it includes the principle that states are independent entities free to decide their own foreign relations and partnerships. In this spirit, primacists like to point out that in today’s changed and changing security environment, there seems to be almost a rule that the closer countries are geographically located to either Russia or China, the more eager they are to forge close security ties with the United States.

Not all primacists see eye to eye, however. Primacists disagree among themselves about the “how” question, i.e., how the United States should wield its power to remain, as Secretary of State Madeleine Albright put it in the 1990s, the “indispensable nation.” Primacists associated with the “realist” school of international relations regard U.S. military power (and deterrence) as an essential ingredient to their approach. Primacists from the “liberal institutionalist” school, for their part, believe that Pax Americana is best maintained if Washington invests in, and dominates through, international and regional institutions.

Notwithstanding these differences, the consensus among primacists is that America should remain deeply engaged and the dominant power in Europe, Asia and elsewhere. The problem is that the United States’ “unipolar moment” has been fading in recent years. Even though American primacy is still impressive today, important challenges have emerged as key regional balances have shifted against the United States, notably in Europe and Asia. In eastern Europe, Russian military modernization has enabled Moscow not only to achieve local overmatch along NATO’s eastern frontier, but also to contest the United States’ ability to defend its allies in the event of conflict. Similarly, over two decades of slow but steady Chinese military buildup have changed the East Asian security environment: Beijing has become increasingly capable of threatening U.S. access to the area within the so-called first island chain, complicating Washington’s ability to intervene in contingencies involving U.S. allies or Taiwan.

An added and critical feature of today’s emerging era is the ability of both Russia and China to deter or at least disrupt U.S. power projection, by holding the American homeland at risk with nuclear weapons (or by using new techniques, such as large-scale cyber attacks) and by implementing “gray-zone” campaigns or hybrid tactics, including land-grabbing or island-building actions. Russia and China have also established new international institutions to better advance their interests in their respective regions. Russia established the Eurasian Economic Union in 2014, to create an economic union of states located primarily in northern Eurasia, and China launched the One Belt, One Road initiative and provided seed funding for the Asian Infrastructure Investment Bank in 2013, to support the building of infrastructure in Asia and beyond. China’s general direction in the context of its re-rise is particularly noteworthy. As Aaron Friedberg puts it in his just-released report on “Rethinking the Economic Dimension of U.S. China Strategy,” expanding trade and investment has not had the expected beneficial effects on China’s external behavior and on the evolution of its domestic economic and political institutions:

Instead of evolving into a mellow, satisfied, status quo power, China has grown more assertive and is using its increasing economic clout and military power to challenge key aspects of the prevailing regional system and the larger international order. Meanwhile, instead of a steadily increasing reliance on market forces, the Chinese party-state has continued, and in certain respects expanded, its use of quasi-mercantilist policy tools.

In these circumstances, maintaining the contours of American primacy intact is becoming difficult, short of accepting high risks and costs if conflict breaks out with Russia and China. Put differently, it is plain that maintaining American primacy in the twenty-first century requires accepting the possibility of major war with them—potentially even nuclear war.

Primacists respond to these developments by arguing that Washington should, as Hal Brands puts it in the 2016 RAND Corporation report “American Grand Strategy and the Liberal Order,” “retake the offensive” and outmatch Moscow and Beijing. It should do so because “the best defense is a good offense,” and because the United States still possesses a preponderance of power to keep the initiative. To be sure, Washington has kept up its competition with Moscow and Beijing, as it should, and has remained ahead by a large margin and has been committed to maintaining its lead. In addition to embarking on a major modernization program of its nuclear arsenal, it has launched the “Third Offset Strategy,” a significant investment to address shrinking U.S. military force structure and declining technological superiority in an era of increasing strategic competition, notably with Russia and China. Initiated by the administration of Barack Obama, these programs are set to continue under the administration of Donald Trump.