Is Collective Self-Defense in Japan's Future? 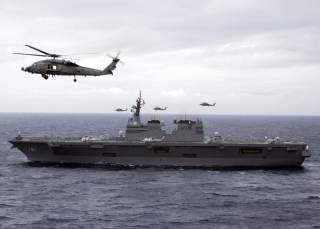 On Thursday, May 15, Japanese Prime Minister Shinzo Abe announced that his government was officially launching discussions on revising the constitution’s interpretation to allow for collective self-defense. That it was clear this was coming does not make the announcement any less momentous.

For sure, Abe does not have a smooth path to updating the government’s interpretation of the Japanese constitution. The Liberal Democratic Party’s coalition partners are not keen on the change, there is resistance within the LDP itself, and Japanese voters remain skeptical. At the end of the day, however, the arguments for allowing collective self-defense are persuasive, and if Abe can continue delivering on his promise to revitalize the economy—first quarter GDP growth reached 5.9 percent, and a major fiscal stimulus is planned for the second quarter—he just may get his way.

A primary argument from the opposition is that permitting collective self-defense will inevitably lead to Japanese involvement in overseas conflicts in which the country has little at stake. The argument is both alarmist and assumes an exceedingly narrow definition of the national interest. It has become clear that a broadened interpretation of the constitution would put well-defined limits on when Japanese forces could act to defend others. Opening the door to collective self-defense does not constitute a blank check for armed intervention abroad.

According to the Japan Times, a government panel that studied the issue concluded that Japan should aid another under attack “if such an attack could lead to a direct attack to Japan, critically damage the Japan-U.S. military alliance, considerably affect the international order, or remarkably damage the life and rights of the Japanese people.” None of these is a peripheral interest. Rather, Abe and his advisers see the right to exercise collective self-defense as necessary to ensure the security and prosperity of Japan as well as regional peace.

Regional peace, meanwhile, increasingly appears to hang in the balance. China is antagonizing its neighbors and testing the United States at a troubling clip. Pyongyang is testing missiles and threatening to detonate a nuclear device while the two Koreas exchange artillery fire in the Yellow Sea. Tens of thousands of Taiwan’s citizens recently took to the streets to protest closer ties to mainland China. And right now, ships are firing water cannons at and ramming each other off the Vietnamese coast, while Chinese vessels attempt to starve out Philippine marines on Second Thomas Shoal. An incident leading to escalation—either unwanted or intentional—is no distant possibility.

Japan’s current leadership knows that Japanese interests extend far beyond the southern Ryukyu islands. That Abe should want tools to defend Japanese interests further afield—whether it be to ensure continued freedom of navigation or protect an Asian order in which states do not resort to aggression to achieve their ends—should come as little surprise.

Still, although pursuing a revised interpretation of the constitution is both natural and rational, it is also revolutionary. Even if applied in only a very narrow range of scenarios, exercising the right to collective self-defense will be a monumental change for a country that has more or less outsourced its own self-defense since the end of World War II. There are implications for defense spending and for the types of forces Japan fields—for how they train, how they operate, and how they interact with foreign militaries. There are implications for Japan’s foreign policy—for the types of relationships it pursues and the defense agreements it forges.

Finally, there are even implications for Japan’s identity. Japan’s people have defined their country as a pacifist one for decades. But should the Maritime Self-Defense Forces one day lawfully come to the defense of a U.S. warship under attack or of a Korean freighter beset by Somali pirates, there will naturally be questions about just what it means for Japan to be “pacifist.”

None of this is to say that Abe is acting rashly or impulsively. Rather, he has recognized that the environment in which Japan lives is changing. Japan must change along with it or live at the mercy of others less hesitant to shape the world to their own desires.