Colombia’s Election: A Referendum on the Peace Process 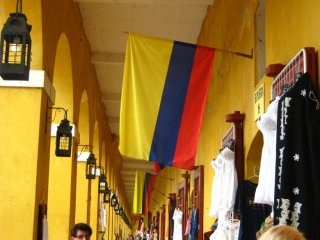 The too-close-to-call presidential election in Colombia on Sunday, June 15 will surely be a fight down to the wire between incumbent Juan Manuel Santos and former finance minister, Óscar Iván Zuluaga. But more than just a clash of candidates and parties, the election is fundamentally a referendum on how to end Colombia’s fifty-year, internal armed conflict, the longest running in Latin America and undoubtedly one of the oldest in the world.

Before Santos was president, he served as defense minister, designing and implementing some of the most devastating blows in Colombian history against guerrillas of the Revolutionary Armed Forces of Colombia (FARC). Together with wildly popular former president, Álvaro Uribe, he implemented a security strategy that retook control of the nation’s roads and highways, reduced homicides and kidnappings, and established a state presence throughout the national territory.

The two men parted ways, however, over the Santos administration’s opening of peace talks with the FARC in August 2012. Uribe launched a furious campaign of recrimination and insult, using Twitter to accuse Santos of turning the country over to “Castro-Chavismo,” a reference to Venezuela’s deceased former president Hugo Chávez, a man widely reviled in Colombia. As he had throughout his presidency, Uribe refused to categorize the guerrilla war as an internal armed conflict, insisting instead that Colombia faced a terrorist threat. Where Santos saw an armed conflict that, while diminished, continued to prevent Colombia’s full economic and social development, Uribe saw treason as well as personal betrayal.

Zuluaga, for his part, was largely a political unknown scarcely six months ago, favored by only 8 percent of Colombian voters. Nonetheless, he has become the figurehead of uribismo, surging ahead to beat Santos by half a million votes in the first electoral round on May 25. Zuluaga vowed to break off the peace talks if elected, accusing Santos of pursuing “peace with impunity.” But he was forced to modify his position in order to garner the endorsement of Conservative Party candidate Marta Lucía Ramírez, also a former Uribe defense minister, who placed third in the first round. In a joint statement, Zuluaga and Ramírez said that negotiations could continue if the FARC ended its violations of international humanitarian law (for example, the recruitment of minors and the use of landmines) as well as its attacks on infrastructure. These conditions are unlikely to be accepted by the FARC; indeed, in most peace processes, they constitute the results of a process of negotiation, not a precondition to it.

Santos has shot back by revving up efforts to showcase the advances of the peace process so far, underscoring to voters what would be lost if he is denied a second term. The government, which has already concluded partial accords on agrarian, political participation, and drug trafficking issues, released a joint communiqué with the FARC just last weekend, spelling out in detail what principles would inform discussions over the next agenda item—addressing the rights of victims. The statement makes explicit reference to victims’ rights to justice, thereby addressing critics who allege that human rights crimes by the FARC will go unpunished. And just this week, the government announced that an “exploratory phase of conversations” was underway with the smaller National Liberation Army (ELN), known for its attacks on Colombia’s oil pipelines as well as the kidnapping of civilians.

It remains to be seen whether Santos’ message of “peace is at hand, stay the course” is successful. Polls have consistently shown that peace with the guerrillas is of far less concern to Colombian citizens than such issues as unemployment, health care and crime. And while Santos has presided over a booming economy, record levels of foreign investment and low inflation, he has been especially bad at connecting with ordinary people, a deficiency that left his approval ratings hovering in the low twenties for most of the last year. By contrast, Zuluaga’s biggest asset has been former president Uribe, a skillful communicator whose “blood and guts” rhetoric resonates with an electorate that, for the most part, despises the FARC.

Both campaigns have worked hard to turn out their supporters and reach independents in the capital of Bogotá, home to 5.2 million voters, less than half of whom voted on May 25. Similarly, both seek to increase turnout in the areas of the country they carried in the first round. (Only 40 percent of eligible voters nationwide voted in the first round, but in some departments, including most of those carried by Santos, the levels were substantially lower.) Serendipitous factors may influence the outcome—whether Colombia wins its World Cup soccer match against Greece on Saturday (one day before the election), or whether the three World Cup games being played on election day itself keep voters glued to their television sets rather than at the polls. What is at stake, however, is far more consequential: whether Colombia’s war with the FARC has a chance of ending at the peace table, rather than through military actions that have failed to annihilate it over the last half century.

Cynthia J. Arnson is director of the Latin American Program at the Woodrow Wilson Center.