Colombia Should Give Peace Another Chance 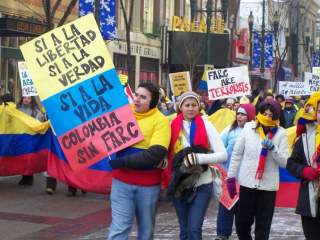 The Colombian people vetoed the historic peace agreement recently signed in Cartagena between the government and the FARC guerillas. The peace deal was supposed to end the decades-long civil conflict that cost about 260,000 lives, forced over 6 million people from their homes, and crippled the Colombian economy and institutions in innumerable ways. According to the agreement, the rebels would have laid down their arms. They would have been granted amnesties in exchange for confessing their crimes in a Truth and Reconciliation Commission (TRC). The FARC would transform into a political party and receive parliamentary seats in the Congress. But it was not to be. For many Colombians, these concessions were tantamount to bending to the will of terrorists. Those who committed countless atrocities could not so easily be let off the hook. “The entire accord was full of impunity,” reportedly said one voter. Opposition leader Alvaro Uribe called President Santos a “traitor” and argued that “with these agreements, there is neither justice, nor truth for the victims of the conflict.”

The Colombians who voted “no” were not alone in their opposition to the deal. Some human rights advocates, too, were discontent with how the “war criminals” were given a “free pass.” Kenneth Roth, executive director of Human Rights Watch (HRW), was quick to remark on the referendum results.  “Looks like Colombians aren't so eager to premise ‘peace’ on effective impunity for FARC's and military's war crimes,” he tweeted. HRW had previously said that the agreement would “make it virtually impossible that Colombia will meet its binding obligations under international law to ensure accountability for crimes against humanity and war crimes.” The proponents of this view argue that such concessions would promote a culture of impunity, and could be interpreted by war criminals elsewhere as a carte blanche to carry out their crimes. The bitter reality, however, is that “conditional” amnesties may sometimes be the price to be paid to end violence.

The opposition to the Colombian agreement reflects a broader trend within the international community. There has been a virtual consensus that gross violations of human rights cannot go unpunished, and that countries have not only the right but the obligation to bring perpetrators of those crimes to justice to prevent further atrocities from happening. Especially since the 1990s, when the first international criminal tribunals since the World War II were established for the Former Yugoslavia and Rwanda, we have witnessed intensified efforts to end impunity globally. The United Nations set up special courts to prosecute the perpetrators in countries like Cambodia, Sierra Leone and East Timor. These efforts peaked with the establishment of the International Criminal Court (ICC) in 2002 and have not been fruitless. Reviled war criminals like Charles Taylor of Liberia and Slobodan Milosevic of Serbia have been brought to justice, and some others like Omar al-Bashir of Sudan have been indicted. These trials arguably sent a message that those who commit war crimes and crimes against humanity would sooner or later be held accountable for their actions.

The problem is that such prosecutions may not always help the cause of peace. It is hard to see how the FARC would have agreed to end the insurgency and turn over their arms to the government knowing that they would be facing life in prison. They would have likely carried on fighting as long as the threat of prosecution continued. And various reports suggest that while FARC has suffered losses, complete victory for the government would be unlikely in the near future. Similarly, would Chilean dictator Pinochet have stepped down if he had known that he would have his day in court? Today, does the ICC arrest warrant for Joseph Kony, the vicious rebel leader of the Lord’s Resistance Army in Uganda, help or hinder the prospects of a peace agreement? The answer to these questions given by the former ICC prosecutor Luis Moreno Ocampo is quite telling: “There can be no political compromise on legality and accountability.” My job, in other words, is to prosecute, not to make peace.

Herein lies the dilemma facing war-torn societies, as well as the international community, struggling to end bloodshed and promote national healing. Do you prioritize punitive justice or peace? If you prioritize punitive justice and “zero tolerance” for criminals, this may hurt peace efforts and cause the war to drag on for a long time, brutalizing the society and victimizing many more along the way. But blanket amnesty is not a reasonable option either. It would be too unfair to the victims if the criminals get to walk away without even acknowledging or apologizing for their past wrongdoings.

In cases where neither criminal prosecutions nor blanket amnesties are a viable option, TRCs, accompanied by conditional amnesties, can be the second best alternative. South Africa is the prime example of how TRCs can help achieve peace, a degree of justice and some form of reparations to the victims without criminal trials. Similar to the proposed Colombian plan, in South Africa amnesties were granted only for those who admitted their guilt and confessed to their crimes. TRCs and conditional amnesty helped promote truth-revealing about the brutality of the Apartheid regime that might not have been possible through criminal prosecutions. TRCs can also facilitate victim participation in these processes, allow them to tell their stories and help initiate a national conversation about the past. As Archbishop Desmond Tutu of South Africa, who played a leading role in the TRC process, said, “there can simply be no lasting peace without the give and take of serious talk. Honest conversation is the womb that holds the possibility of enduring peace.” Certainly TRC is no panacea. But if designed and implemented the right way, it can allow countries achieve peace and some degree of justice and reconciliation.

In some cases, amnesties can also be used as a temporary measure, or a form of “interim justice.” In countries like Argentina and Chile, which suffered under long dictatorships during the 1970s and 80s, amnesty was used as a transitional measure. These countries were eventually able to bring those responsible for human rights violations to justice—at least some of them. Therefore, amnesty can keep the door open for future prosecutions, and does not necessarily prevent future trials. But it should not be forgotten that sometimes even the distinct possibility of facing trials in a distant future can discourage those criminals from reaching a settlement.

Ending long and deeply entrenched conflicts and building peace is a complex and difficult process. One-size-fits-all approaches prioritizing punitive justice may not always help the peace processes, but even prolong wars. Granting amnesties and parliamentary seats for people they see as terrorists may have been a hard pill to swallow for some Colombians. The silver lining is that the regions most affected by the conflict have overwhelmingly voted for the peace agreement. The rest of the Colombians, as well as international human rights advocates, should take note of this and do some soul searching about the alternative to the having imperfect peace. Let us hope that it is not too late to change their minds.

Omer Zarpli is a PhD student at the Political Science Department at University of Pittsburgh and a former research associate at the Century Foundation in Washington, DC.

Image: A protest against the FARC held in Calgary, Alberta. Wikimedia Commons/Robert Thivierge