Colombia's Political Problems Are an Opportunity for America 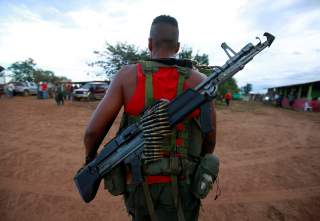 In order to better coordinate his response to the latest developments in Syria, President Trump has cancelled what would have been his first trip to South America. Vice President Pence will now go in his stead to attend the Eighth Summit of the Americas.

On the sidelines of that conference, Pence will meet with Colombian president Juan Manuel Santos, who was awarded the Nobel Peace Prize in 2016 for striking a peace deal with the Marxist Revolutionary Armed Forces of Colombia (FARC). While the Obama administration unreservedly supported that peace process and agreement, the majority of the Colombian people did not, voting against it in a 2016 referendum. However, at the urging of the Santos administration, the Colombian Congress approved the deal anyway.

Given Santos’s lame-duck status (his second and final term in office expires this spring), Vice President Pence’s meeting with him should be cordially superficial; talking real policy would be a waste of time. And that’s just fine. The Trump administration will need to navigate the fallout from the peace deal with the next Colombian administration. To do so, however, the White House must have a clear picture of what that agreement did—and didn’t—accomplish.

Seventeen months after the FARC and President Santos signed a historic peace accord, the promises of that agreement have not panned out. Cocaine production has skyrocketed. Hundreds of FARC members either refused to demobilize in the first place or have since abandoned their commitment to adhere to the peace-deal terms. These so-called FARC dissidents, along with the radical National Liberation Army (ELN), continue terrorist attacks against the Colombian Armed Forces and civilian targets.

Meanwhile, neighboring Venezuela remains a safe haven for such bad actors, whose cross-border movements go largely unchecked. Furthermore, the thousands of desperate Venezuelans pouring into Colombia—most without papers or means to support themselves—are prime targets for recruitment by such radical forces.

The silver lining is that, now that the peace agreement is signed, the pro-deal lobby will suck up less air on Capitol Hill, allowing for DC decisionmakers to get back to the task at hand—namely, working with Colombia to combat drug-funded terrorism and crime whose transnational reach continues to threaten the entire region.

As they do, they should keep in mind the following solutions. While by no means comprehensive, these suggestions are implementable within current budget constraints, and they would help put the relationship between Washington and Bogota, long a captive of peace processing, back on track.

First, the United States must exert pressure on the incoming Colombian administration to restart the aerial eradication program. According a 2017 DEA intelligence report, cocaine production rates first jumped in 2013—shortly after peace talks commenced in Havana, Cuba—when the Santos administration quietly cut back on aerial eradication, ultimately terminating the program in the 2015, due to pressure from FARC negotiators. Publicly, the Santos administration justified its decision by referring to a World Health Organization report, which stated that the U.S. EPA-approved chemical glyphosate—the most widely used weed killer in the world—“probably” causes cancer. In fact, the report was in no way definitively damning. And, due in large part to the draw-down and termination of the aerial eradication program, cocaine production levels are now the highest they have been in two decades, according to a 2017 United Nations Office on Drugs and Crime report.

Second, future aid packages for the Colombian army and National Police should reprioritize and reinvigorate the relatively low-cost civil-affairs efforts in rural areas. Civil affairs—or accion integral—initiatives include community improvement and infrastructure projects executed by the armed forces hand-in-hand with local civilians. In many parts of rural Colombia, where bad actors are most active, the army and National Police are the sole representatives of the national government, but they have yet to win the trust of the local populace. Local peasant farmers continue to see FARC dissidents, the ELN, or drug traffickers as the real authorities. In turn, those bad actors continue to rely heavily on civilian cooperation in their day-to-day operations. Civil affairs/accion integral initiatives lessen bad-actor influence and solidify the military’s legitimacy in the eyes of the campesino (farm workers), which is key to maintaining security in rural regions over the long term.

Third, resources should be spent modernizing Colombian Army intelligence networks. Each army division has its own regional intelligence team—known as Regionales de Inteligencia Militar. Generally speaking, the Regionales de Inteligencia Militar teams have been highly effective in gathering various types of intelligence within their respective areas of operation. However, intelligence-sharing mechanisms between teams and across other branches of the armed forces are lacking. An investment in overhauling existing databases and networks is warranted if Colombian military intelligence is to be prepared for what may be an increasingly complex security situation.

Though it is too soon to predict who the next president of Colombia will be, the Trump administration must plan to put pragmatism before political correctness and negotiate resource allocation with a renewed focus on cost-effective efforts. Contrary to claims made by the Colombian left, continued U.S. investment in Colombian national security is not a threat to regional peace, but rather, its guarantor.

Image: A fighter from Revolutionary Armed Forces of Colombia (FARC), arriving at the camp where they prepare for an upcoming congress ratifying a peace deal with the government, near El Diamante in Yari Plains, Colombia, September 16, 2016. REUTERS /John Vizcaino