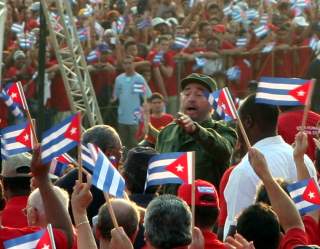 Dateline: Santiago, Cuba, December 4, 2016—After a lengthy cross-island caravan and days of mourning, the ashes of Cuba’s “eternal Comandante” arrive at their final repository in Santa Ifigenia cemetery, near the mausoleum erected for Jose Marti. Near where it began, the Fidel Alejandro Castro Ruz story seemingly concludes.

While Cuba’s iconic Marxist-Leninist caudillo could for decades defy the United States, the principles of market economics, and the dictates of liberty and human freedom, Fidel, even in all his mightiness, could not stay the course of human mortality.

Over the past week, reactions to Fidel Castro’s death have ranged from jubilant to somber, nostalgic and tearful. The world’s press has deluged us with a mass of biographical information and a steady stream of collective memories from supporters and opponents. In retrospect, we have seen Fidel’s shifting if ever domineering character: revolutionary firebrand, Faustian risk taker, outsized ego, architect of the Cuban Revolution and Cuban socialism, wily survivor and ruthless, vindictive tyrant.

We had the chance to choose an episode or episodes as high or low points in Castro’s event-filled ninety years: the betrayal of the revolution’s initial democratic promise, the brutal transformation and leveling of Cuban society, hairbrained economic schemes, literacy and health campaigns, the Bay of Pigs fiasco, the Cuban Missile Crisis, the faithful client of the Soviet Union, exporter-in-chief of social revolution to the Americas, progenitor of the Mariel boatlift, draconian leader of the “Special Period,” cold-blooded assassin in the shoot-down of the Brothers to the Rescue aircraft, vindictive instigator of “the Black Spring” roundup, senior member of the Castro-Hugo Chavez tandem or aging autocrat in a final decade of physical and mental decline.

By December 5, the world moves on. Cuba, its people, the United States and the world turn back to normality. When the eulogies end, all stand face-to-face with Fidel’s enduring, problematic legacy. What is the nature of that legacy? Here is a partial inventory.

• The only nation in the Western Hemisphere never to have experienced a genuinely free election at any level of governance since the Castro brothers achieved power in 1959. As the Hemisphere’s genuinely non-democratic outlier, Cuba has not sought readmission to the Organization of American States and is a non-signatory to the Inter-American Democratic Charter.

• A country the Economic Intelligence Unit ranks on par with Belarus, Russia, Vietnam and Egypt in terms of democratic governance.

Ahead lies an uncertain, undemocratic transition from Raul to a post-Castro regime in 2018, one likely to be marked by secretive and potentially destabilizing infighting within the inner power circle of hardline elders of the Cuban Revolution, members of the Castro clan and contemporary apparatchiks raised to power in the waning years of the Castros.

As has been the case for over fifty years, Cuba remains a police state. Political order is preserved by the combination of the “inner policeman” and the unrelenting surveillance of the organs of state security whose agents are skilled in silencing dissent and preserving political conformity among a fearful citizenry. At its foundations the Castro regime is still anchored in repression and a fear of dissent that allows individuals deemed “dangerous” to the regime and its ideology to be arbitrarily detained without actual commission of a crime. Despite a reduction in the number of long-term political prisoners, detentions, assaults and harassment are daily occurrences. Politically motivated detentions—reportedly as many as nine thousand already this year—appear to be on the rise.

The Cuban government is largely devoid of accountability, transparency and rule of law. The judiciary lacks independence and plays the role of obedient servant of the regime’s interests.

Cuban citizens, according to Freedom House, are routinely deprived of fundamental press freedom and have restricted access to internet freedoms. The government maintains a monopoly on media outlets and refuses to recognize independent human rights groups or to permit them to function legally. In addition, according to the U.S. State Department, “the government continued to prevent workers from forming independent unions and otherwise exercising their labor rights.”

Cuba’s “progressive” health system has distributed care unevenly, serving the governing elites first and foremost. The Castro regime has widely exploited its health and medical workforce, offering up health professionals as a lucrative export commodity. Medical professionals reportedly find it more lucrative to drive taxis than to work in their profession.

While Cuba’s education system has delivered widespread literacy and higher levels of technical education, Cuba’s youth and college-educated are locked in a stifling ideological straightjacket, largely denied intellectual and academic freedom or economic space for innovation and entrepreneurship. Noteworthy is the fact that Cuba has not a single university ranked among the top fifty in Latin America. With all its human capital, Cuba excels in well-developed under-development.

Cuba possesses an aging, dispirited population in a state of demographic decline with a negative growth rate of 0.3 percent — the lowest among Latin American nations. Out migration, legal and illegal, remains a significant safety valve for repressed Cubans whose hopes and dreams are stymied by the socialist system.

Only North Koreans, according to the Heritage Foundation’s 2016 Index of Economic Freedom, enjoys less economic freedom than Cubans. Observes Heritage, the economy is repressed by “the systemic inefficiency and institutional shortcomings characteristic of a Communist regime. It is dominated by “state-owned companies connected to the military and political elite” and its lack of dynamism is “aggravated by cronyism, corruption, and bureaucracy.”

The modestly growing non-state sector has expanded as the inefficient and antiquated state sector seeks to shed jobs, but the absence of genuine political will for reform leaves business struggling within a poor regulatory framework. Long maligned by Fidel, tourism, now given a fresh fillip with American investors, visitors and dollars, brings new challenges from hedonism to sexual tourism.

Finally, Cuba’s fierce anti-American nationalism can be contrasted with Fidel Castro’s habitual readiness to run hat-in-hand to foreign benefactors seeking to balance against or undermine the U.S. role in the world. In the two decades following the collapse of the Soviet Union, the elder Castro established intimate ties with the Bolivarian revolutionary Hugo Chavez. With Chavez’s death in 2013, Fidel and Raul backed Cuban-trained Nicolas Maduro as the presidential successor. Argues Francisco Toro, Fidel’s greatest foreign policy victory and most troubling legacy is the current Bolivarian dictatorship in Venezuela.

Nevertheless, the recent downturn in the price of petroleum has left Venezuela, saddled with socialistic mismanagement, teetering on the brink of economic collapse and Cuba scrambling to fill a void left by its reliance upon Venezuelan largess.

The extended period of official of mourning for Fidel is concluding. While hope for the future is always present, Cubans, Cuban-Americans, Congress and the Trump administration must now reckon on a daily basis with the continuing price of a regime so firmly molded by the heavy hand of a departed tyrant.