Combatant Commands Must Jettison the Forward Operating Base 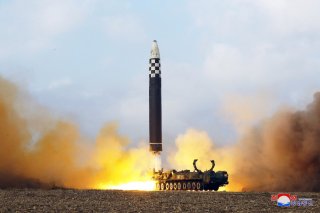 In a world where multipolar challenges are rising, the strategic role played by U.S. Combatant Commands and forward operating bases in the national security framework must be reassessed. Even though the United States is no longer the global military hegemon, the Combatant Command structure remains centered on that assumption, striving for dominance in regions assigned to each Command, particularly the Indo-Pacific, Europe, and the Middle East. Those efforts battle the reality that in the modern world the United States increasingly lacks the resources and means necessary to continue to project military dominance everywhere. It cannot fight and win conventional wars in the South China Sea, Europe, and the Middle East simultaneously.

The U.S. Pacific Fleet, the Third Marine Expeditionary Force, the U.S. Army in Korea, and the Air Force Pacific are all exposed to any conventional conflict by their logistical dependence on forward operating bases (FOBs), mainly in Japan, South Korea, and Guam, which are thousands of miles from the U.S. mainland. U.S. bases in Europe face similar issues in the event of conflict with Russia. None of those bases can continue to be legitimately regarded as sanctuaries. They all fall within the bracketed range of Chinese, North Korean, and Russian missile and strike capabilities. Even were such bases able to survive first strikes by relying on improved air defenses and the dispersion of forces and caches, their logistical ability to continue to sustain and supply ongoing combat operations would be problematic, subject to constant harassment and disruption. China now has the world’s largest navy. Even if all U.S. warships were redeployed to Indo-Pacific Command to buttress the Pacific Fleet, it would still be outnumbered by the People’s Liberation Army Navy, a maritime force that would be further backed by land-based mobile missiles, drones, and aircraft all along China’s 9,000-mile coastline.

America’s forward base strategy, a doctrine developed by Captain Alfred Mahan in 1890 for establishing a string of naval bases around the world to project American power, is enshrined but becoming outdated by advancing military technologies. In addition to China or Russia, any number of smaller powers now also have missile, drone, and cyber capabilities that can pose real threats to U.S. logistical centers and personnel. The 2019 attack by Iranian drones on a Saudi oil refinery could have just as easily attacked US military bases nearby. The U.S. Combatant Command structure, and the forward operating bases it relies upon, have enhanced U.S. security for decades; but with the rapidly changing realities of modern warfare, they are in danger of becoming as obsolete as France’s Maginot Line turned out to be in the face of the German blitzkrieg.

One of the most important strategic accomplishments of the post-Cold War era was the passage of the Goldwater Nichols Reorganization Act in 1986, codified in Title 10. Among other reforms, it strengthened geographic military commands, enabling their leadership by a single four-star flag officer who was responsible for any assigned missions across all services within the Command’s designated area of responsibility (AOR). Like the chairman of the Joint Chiefs of Staff, combatant commanders report directly to the secretary of defense, who in turn, reports to the president. The impetus for this reform goes back to World War II, when there was constant friction between the Army and Navy, particularly in the Pacific. President Harry Truman once wryly observed that “if the Army and Navy had fought our enemies as hard as they fought each other, the war would have ended much earlier.” Such coordination problems continued well after WWII, including the 1980 Iran hostage rescue failure at Desert One; the 1983 Beirut Marine Barracks disaster; and the coordinating frictions between Army, Marines, and Navy during the 1983 Grenada invasion. Goldwater Nichols largely resolved that.

By law under Title 10, the Joint Chiefs of Staff, including the chairman, were taken out of operational responsibilities for warfighting and replaced by designated joint Combatant Commanders for every region on the globe. Commands for Europe, the Middle East, the Indo-Pacific, Africa, and South America have grown into powerful hubs for the conduct of U.S. national security policy over their assigned regions, going well beyond the realm of actual warfighting and plan preparation. Ironically, while joint geographic Combatant Commands have helped to quell inter-service rivalries over actual military operations, they have spawned new rivalries with the Joint Chiefs of Staff and the State Department over the conduct of U.S. national security policies within each Command’s assigned AOR.

With new technologies threatening the viability of forward bases, the central role played by Combatant Commands calls for adjustment. Inevitably, these Commands press the Pentagon and Washington for more assets to handle challenges within their respective AORs largely built on FOB strategies. Under Title 10, it is the responsibility of the chairman of the Joint Chiefs of Staff, supported by the Joint Staff, to review the roles and missions of Combatant Commands at least every two years under a Unified Command Plan. Facing the specter of potential simultaneous conflicts in Asia, Europe, and the Middle East, the Pentagon, not Combatant Commands, must step forward under its Unified Command Plan authority. The Joint Staff, with its more global perspective, must determine how best to marshal U.S. military assets to avoid over-committing limited resources to far-flung regions where they could be vulnerable to attack by longer-range missiles, drones, and cyber-attacks. The United States must move warships, air assets, and infantry away from exposed FOBs and relocate them to more secure sites in Hawaii, Alaska, and the North American mainland where any attack by foes would carry the existential risk of a U.S. nuclear response.

Combatant Commands, particularly Indo-Pacific Command, Central Command, and European Command, must instead put greater focus upon working with allies and partners to develop their own air defense and anti-ship capabilities as first lines of defense. For example, Japan has just announced that it is increasing its defense budget to 2 percent of GDP by 2027 and that it will obtain long-range missile strike capabilities. Japan will soon have the world’s third-largest defense budget in terms of actual spending. Allies and partners, not substantial U.S. forces, should primarily absorb and hold the first waves of enemy attacks against their own countries. By strategically relocating key warships, aircraft, and infantry to the United States, the United States can avoid early losses and disruption, making those intact forces more ready to take the offensive in support of allies against foes through combined arms and maneuver warfare.

Expeditionary strike force groups consisting of beefed-up Marine expeditionary forces, combined with Nimitz-class carrier groups, must continue their current roles but operate out of secure U.S. bases with less reliance on comprehensive logistical support and quarters at overseas locations. These strike groups must remain the global maritime backbone for the projection of military power, further supported by the Army and Air Force, when called upon to deter or deal with conventional conflict in any region of the world. They can carry on their traditional mission of building closer relations with allies through port visits and joint exercises in peacetime based out of more secure U.S. facilities. Continued emphasis on developing U.S. long-range strike capabilities, including stealthy nuclear submarines and the B-21, will further help wean U.S. dependence on FOBs that fall within the range of missiles and drones of potential foes.

The U.S. base presence in Europe could be substantially reduced as well, for the additional reason that NATO Europe should be more than capable of dealing with any Russian conventional threat, particularly now that the Ukraine War has shown that Russia’s conventional military is not ten feet tall. Turning over more responsibility to NATO’s European allies in their own theater would free up additional U.S. military assets, notably within the Army and Air Force, for other missions. The U.S. military cannot continue to do everything, everywhere. The Defense and State Department must work harder to get that point across to Washington’s NATO allies.

Strategic changes along these lines would be revolutionary for the U.S. national security structure and bureaucratic establishment. Withdrawing any U.S. forces from forward operating bases would inevitably be misconceived and attacked as a return to isolationism. A controversy was just sparked in October when the Air Force announced its intention to replace an aging fleet of F-15 aircraft in Okinawa with a rotating force. Critics worry that this change will send the wrong deterrent message to China and show wavering support for Japan. In fact, such realistic repositioning of U.S. forces will enable the United States to do a better job of supporting its allies and friends in the event of conflict.

History also has lessons for FOBs. In 1940, after training maneuvers in the Pacific, President Theodore Roosevelt ordered the commander in chief of the U.S. Fleet, Admiral Richardson, to keep ships in Hawaiian waters and not to return them to their home port in San Diego, California. Richardson strongly protested, arguing that such a move was not strategically sound. Tiring of Richardson’s resistance, Roosevelt fired him. The U.S. Fleet was reorganized in February 1941 into Atlantic and Pacific forces. Admiral Husband Kimmel replaced Richardson for the Pacific. Warships were relocated to Pearl Harbor from San Diego as a forward operating base to deter Japan, as Roosevelt had ordered. Several months later, Japan struck Pearl Harbor.