Comeback: How Islam Got Its Groove Back in Russia 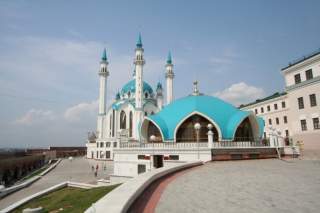 Vladimir Putin has made religion a central part of his public image, using Orthodoxy as a way to bolster for his political agendas. But Orthodoxy is not the only religion that experienced a revival in the post–Cold War period; among other religions, Islam, once shunned by the Soviet state, has increasingly been embraced by the Russian state.

This was a major theme of an April 7 presentation at George Washington University’s Elliott School by Bulat Akhmetkarimov, a PhD candidate at Johns Hopkins University’s School of Advanced International Studies (SAIS). At the event, titled “Islam and the Dynamics of Ethno-Confessional Regimes in Russia, 1990-2012,” Akhmetkarimov discussed the Russian state’s attitudes toward religion and how attitudes toward Islam have evolved in the late twentieth and early twenty-first centuries.

As the largest religious minority in Russia, Muslims make up roughly 11 percent of Russia’s total population. Based on statistics provided by Pew Research Center, this percentage is predicted to increase to roughly 13 percent by 2030 and nearly 17 percent percent by 2050, with about twenty million Muslims in Russia.

To highlight just how much has changed with respect to Islam in Russia since the collapse of the Soviet Union, Akhmetkarimov stated that the percentage of Muslim “believers” has increased dramatically over the last two decades or so.

He further asserted that there was a post-Communist Islamic revival in Russia around 1997, commenting that the number of mosques in Russia increased from 160 to 7,000 between the years 1990 and 1997. While these were mostly private initiatives, the increase in the number of these initiatives could have been indicative of a relaxing of attitudes in Russia towards Islam, and perhaps religion more generally.

The number of Islamic missionaries from abroad also increased from zero to one thousand between those same years. Furthermore, the late 90s also saw a spike in the frequency in usage of the terms “Wahhabism” and “Salafism.”

Along with these trends, Russian state attitudes towards Islam, and religion in general, were undergoing a huge shift. During the Soviet Union, state policy could be categorized as “assertive secularism.” The state clamped down on religious expression. Many Russians started replacing the Orthodox icons in their krasnye ugoly (beautiful corners)—the place in one’s house where icons were placed and towards which many would pray—with portraits of Lenin.

After the collapse of the Soviet Union, Akhmetkarimov asserts, state policies shifted to “passive secularism,” with attitudes toward religious education and religious press being categorized as “neutral.”

In the 2000s, state policies shifted to “established religions,” recognizing not just one religion, as was the case in Russia from 988 through Peter the Great’s rule, but recognizing many of them and adopting a more regulatory attitude. Akhmetkarimov dubbed this phenomenon an “organic partnership.”

Akhmetkarimov also explained how Russia changed from a multiethnic (as opposed to monoethnic) state in the 1990s, to one that was more supraethnic in the 2000s, emphasizing the importance of being culturally Russian, not necessarily purely Russian by blood. Akhmetkarimov believes these shifts have contributed to a much wider acceptance of religion and a reemergence of Islam in post-Communist Russia society in the late 1990s.

Akhmetkarimov also addressed the limits of the “organic partnership” model, and why the model may not be successful or sustainable. For example, it could confine religion to specific definitions, interfaith relations could become tense, nationalism could increase as a result of immigration, Islamic religious pluralism could emerge, and various other structural problems could arise.

Asked how, if at all, he thought Russian state attitudes toward Islam might be affected by Putin’s increasing emphasis on Orthodoxy and actions in Ukraine, he argued that the Orthodox Church has its own goals and is not simply a “tool of the state.” He further pointed out that  Russia “certainly is not aiming to become a religious state,” but that it is not anti-religious, either.

He generally did not seem to think that the religious freedom of Muslims in Russia would be harmed in the near future. Hopefully he is right.

Rebecca M. Miller is an assistant editor and illustrator at The National Interest. You can find her on Twitter: @RebecMil.