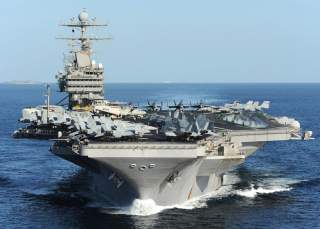 Early this year, a Russian group proposed to build a nuclear-powered aircraft carrier for India. The notional carrier would rival the supercarriers of the U.S. Navy in size and capability. Why did the Russians make such an offer, and what might the Indians make of the deal?

History of the Carrier:

Russian interest in a supercarrier began during the Soviet period. Lacking the extensive worldwide bases that the United States Navy enjoyed, the Soviets could potentially benefit even more than the Americans from nuclear power, which reduced the logistical overhead for a carrier battle group.

Events intervened, and the Soviet carrier fleet never materialized. The four Kievs rotted (until one became INS Vikramaditya), while the Russians commissioned Admiral Kuznetsov and allocated her sister to Ukraine, which sold the hulk to China. The big (eighty-thousand-ton) nuclear carriers never left the slip, although the lead ship of the class (Ulyanovsk) reached 20 percent of completion before scrapping. Reportedly, China intends to construct two of its new carriers to a modified Ulyanovsk design.

The Shtorm class represents a new step in Russian carrier design. At roughly one hundred thousand tons, the Shtorms would compare roughly with the U.S. Nimitz- and Ford-class ships. It will carry advanced sensor and defense systems, eschewing (at least at this point) the anti-surface weaponry that has characterized previous Russian carriers. The ships would presumably be built at Sevmash shipyards, the only remaining Russian shipyard capable of managing such ships. Even then, Sevmash would require considerable expansion and modification to handle the giant carriers.

However, numerous problems remain. Russian shipbuilders have not constructed an aircraft carrier since the 1990s, and have never built a ship the size of the Shtorm. The Russian economy has gone deeply south in the last few years, forcing the Kremlin to carefully prioritize its defense commitments. Moreover, as many American commentators have noted, the supercarrier as a platform has multiple vulnerabilities.

History of the Relationship:

And this makes a sale to India attractive. Put simply, Russia cannot afford to devote scarce resources to the construction of a nuclear aircraft carrier, unless it has a partner with sufficient financial wherewithal to make the project worth it. China’s shipbuilding industry has progressed to the point that it no longer requires Russia’s assistance. Only India both wants carriers and can afford them.

India has jumped into carrier aviation with both feet. To replace the ancient INS Viraat, India acquired INS Vikramaditya (the former Admiral Gorshkov) from Russia in 2013. India is currently building INS Vikrant, a forty-thousand-ton carrier similar to Vikramaditya in size and capability. India’s next carrier, provisionally named INS Vishal, may enter service in the middle of next decade. It appears that the Russians want the Shtorm project to fill in for Vishal.

Russia also desperately wants to hold on to its defense relationship with India, especially as New Delhi appears to drift towards the United States. Building an aircraft carrier for India could take a decade or more, and would demand an extensive, long-term relationship between the navies of the two countries. If Russia also supplied the carrier aircraft (some have mooted the idea of a carrier-capable version of the PAK FA eventually flying off the Shtorms), it would play the central role in the long-term development of India’s naval aviation program, presumably putting the United States on the outside looking in.

In a sense, the project mirrors that of the deal that the Russians made with the French to construct two Mistral-class amphibious assault ships. In that case, France sought to offset the cost of developing the Mistral platform by building an export market. Russia offered itself as the primary customer, in a deal that would involve technology transfer and the construction of two Mistrals in Russian yards. As everyone knows, however, the deal went sour; France withheld the Mistrals after Russia invaded and conquered Crimea (one of the amphibious assault ships was named RFS Sevastopol, a move that was on the nose even by the standards of the Russians). A Russian deal with India would similarly try to share costs and risk across both countries, although hopefully with a more positive eventual outcome.

It’s hard to make this idea make sense for India. India is already doing the difficult work, with INS Vikrant, of developing the capacity to build huge warships. Building Vishal in India would no doubt be difficult and expensive, but it would preserve the hard won human and physical infrastructure necessary to build large carriers. Vishal will likely not displace one hundred thousand tons, but India probably doesn’t need a carrier of that size.

Even to the extent India would want a patron, why would it choose Russia, a state with extremely limited experience with modern carrier operations? The deal to acquire INS Vikramaditya went well over budget, and came in considerably behind schedule. There is very little reason to believe that the Russians would do better with an even more complicated project. The United States has offered to collaborate with India on a variety of advanced carrier technologies, an offer that would likely end if India threatened to share those technologies with Russia. More broadly, the Russian defense industry has become an increasingly unreliable partner for India, as the ongoing saga of the PAK FA has demonstrated. The idea of turning the PAK FA into a naval fighter is certainly. . . interesting, and not in a good way.

Notwithstanding the long-term defense relationship between Russia and India, and the ongoing insistence of many within the Indian diplomatic and defense communities for maintaining a balancing act between Russia and America, there is little real prospect of Russia building an Indian carrier. If India decides to spend that much money, it will want to keep the investment domestic, rather than export capital to an unreliable partner. Like so many previous plans, the Shtorm class will likely remain on the drawing board, unless Russia’s economic fortunes change dramatically.