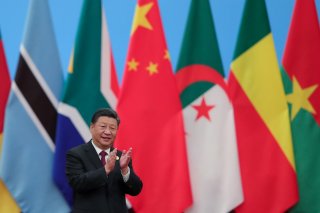 As the United States has taken steps to improve its coordination with allies vis-à-vis China, many Western analysts have written that Beijing has lost its confidence, is losing its influence, and has even begun “flailing” on the international stage in the face of increasing international pressure. Such negative appraisals of China’s coronavirus-era behavior and trajectory are backed by revulsion against Beijing’s persistent Wolf Warrior diplomacy, increasingly egregious human rights violations, and unwillingness to cooperate on investigating the origins of the coronavirus, among other concerns. Americans and Europeans now view Beijing more negatively than at any point since the 1989 Tiananmen incident.

Since assuming office, President Joe Biden has set out to rally European and Asian allies and partners to his side, leveraging negative views of China to bolster his efforts. The administration has received support from the G7, whose recent joint statement explicitly mentioned the group’s need to respond to Chinese human rights abuses and distortive economic practices. Further afield, Biden has emphasized security cooperation through selling Australia nuclear submarines and reinvigorating the Quadrilateral Security Dialogue.

Whereas the United States has primarily concentrated on shoring up ties with Asian and European allies and partners, China is casting a wider net in its competition with the United States. While jockeying for influence with many of Washington’s European and Asian allies and partners, Beijing is also focusing on a much larger geographical space that includes Africa, the Middle East, Latin America, and Southeast Asia, regions where U.S. economic and development initiatives are lagging.

Despite rolling out the Build Back Better World (B3W) and increasing funding for the Development Finance Corporation, the Biden administration is on the back foot in the developing world. The administration’s foreign policy strategy is effectively ceding the developing world to China by failing to offer viable alternatives to Chinese initiatives. Washington will need to increase its diplomatic engagement with the Global South and provide more attractive aid and economic initiatives that drive regional growth and reinforce that the U.S. system can deliver positive development outcomes.

There are, of course, myriad moral and ethical imperatives for the United States to further support global development. However, given the administration’s focus on competition with China, this article highlights the significant flaw in its early strategy.

Souring relations with the West have done little to disrupt Beijing’s strategy to become the unofficial leader of the developing world. Since Biden’s election, China has doubled down on diplomacy with developing countries, dispatching top diplomat Yang Jiechi and Foreign Minister Wang Yi on a dizzying tour throughout Southeast Asia, the Middle East, Africa, and beyond. Despite concerns about the efficacy of Chinese vaccines, Beijing has provided over 1.3 billion coronavirus vaccine doses to over eighty developing countries. It has also continued to cultivate ties with a wide swath of political parties with an eye toward further legitimizing illiberalism in the international arena.

Over the course of the pandemic, China has made strategic investments in technology, infrastructure, and energy projects that few, if any, other countries are willing or able to; Beijing is working with governments, on their terms, to support their goals across a wide range of sectors.

Perhaps the most notable of China’s pandemic-era forays is its drive to further ties with Middle Eastern countries. At the same moment, Washington is planning to decrease its presence in the region in order to, ironically enough, focus on improving its posture in the Indo-Pacific region.

In Saudi Arabia, Chinese companies have agreed on several notable contracts with the government over the last eighteen months. Perhaps the most significant of which is a Huawei-backed plan to develop several smart-city projects. Alibaba is also involved and recently struck a deal, along with Huawei, with the National Center for Artificial Intelligence to develop AI-enabled smart-city technology. Furthermore, Whale Cloud, an Alibaba-linked company, inked a cloud computing contract with local telecom Zain Saudi Arabia last October to improve the kingdom’s cloud computing capabilities.

At the same time that it pumps money and technology into the Middle East, China has thrown Iran a crucial lifeline, reportedly agreeing in March to invest $400 million in the isolated and heavily sanctioned country. While the figures are not guaranteed, and many view the pledge as mostly aspirational, the deal highlights Beijing’s desire to support the embattled regime through significant investments in oil and gas projects, as well as transportation infrastructure. Tehran has struggled to attract foreign investment for decades, and Beijing has stepped in to further prop up a thorn in Washington’s side, as well as to reportedly lock in highly discounted energy imports. Beijing is building strong partnerships with two of the most important players in the Middle East, cementing a new regional role as Washington re-pivots toward the Indo-Pacific.

In Southeast Asia, China, which has strengthened ties with U.S. allies Thailand and the Philippines over the last few years, has succeeded in improving relations with Indonesia during the pandemic despite the latter’s concerns about China’s treatment of Uighur and other Muslim ethnic groups and aggression in the South China and Natuna seas.

China is Indonesia’s second-largest source of investment. Since the onset of the coronavirus, the two countries have established a high-level dialogue to boost bilateral ties, conducted naval exercises, and agreed on the construction of an $830 million coking plant in Sulawesi. Despite their difficult shared history, which includes several rounds of violence targeting ethnic Chinese citizens across Indonesia, Beijing and Jakarta appear primed to build on the reported 3,000 ongoing China-funded projects across the archipelago.

In Latin America, China has made vaccine and mask diplomacy the center of its recent regional efforts, providing the lion’s share of the shots administered in most regional countries, including Panama and Chile. Beijing has also made mask and vaccine diplomacy a key aspect of its engagement with Africa, and it continues to provide digital technologies to countries across the continent. While the volume of Chinese loans to Africa may have begun declining in 2019, Beijing has continued to make several big-ticket investments in infrastructure and manufacturing since the outset of the pandemic. In the last year, the Democratic Republic of the Congo and Botswana officially signed on to the Belt and Road Initiative, Tanzania recently agreed to a $1.32 billion contract with two Chinese companies for a new rail line, and Djibouti and China Merchants Group struck a $3 billion deal to expand the Djibouti City port.

Despite Biden’s rhetorical embrace of Washington’s return to multilateralism, his administration’s engagement with low- and middle-income countries has been lackluster. Tellingly, Biden’s spring 2020 Foreign Affairs article, in which he outlines his foreign policy vision, does not include the term “developing world” a single time. The article only mentions Latin America and Africa once, noting the importance of “seiz[ing] opportunities for cooperation” in those regions. In the piece, Biden provides no vision for engaging a region that’s home to the vast majority of the world’s population.

While Biden’s vow to donate half a billion vaccines to other countries and his pledge to expand aid to low- and middle-income countries most at risk from climate change-induced disruptions are welcome actions, his administration’s diplomatic engagement with developing nations has been sorely lacking. Furthermore, two of the administration’s most significant development tools, the Build Back Better World (B3W) and Development Finance Corporation (DFC), have yet to make meaningful impacts. The former has been criticized for appearing like “a first-world framework to solve first-world problems,” rather than those of developing nations, and the latter has so far focused on projects in upper-middle-income countries.

The essential issue with infrastructure finance in the developing world is that it’s difficult to turn a profit. That’s why the B3W’s focus on mobilizing private capital and the DFC’s mandate to be profitable will continue to hamstring their efforts. Instead, the DFC should focus on providing long-term, very low-interest loans for projects that local companies can undertake themselves, particularly those aimed at paving roads, providing access to clean running water, and expanding and improving healthcare infrastructure. Furthermore, the administration should make human-centered development projects, such as the Treasury-funded Feed the Future and the Global Health Initiative, cornerstones of its foreign policy. The ongoing pandemic has plunged hundreds of millions into poverty, and the administration should make helping them a major initiative.

If the United States is intent upon emphasizing competition with China, which Biden appears to endorse, then it must prove that its system can deliver the greatest good for the greatest number. China’s international engagement model, though far from perfect, has improved global infrastructure stock. Beijing’s actions, whether strategic, altruistic, or both, provide the sense that China addresses the needs of its partners in the developing world. Given the United States’ status as the global leader, it would behoove Washington to expand its engagement with the developing world to improve people’s quality of life and prove that democratic societies can drive global development despite increasing domestic and international challenges.

Paul Haenle holds the Maurice R. Greenberg Director’s Chair at the Carnegie Endowment for International Peace and is a Visiting Senior Research Fellow at the East Asia Institute, National University of Singapore.