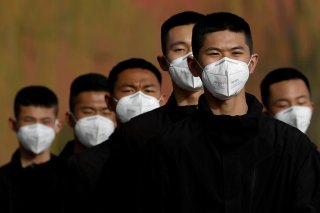 The coronavirus, also known as COVID-19, first emerged in China. Beijing’s late, inadequate, and skewed information disclosures accelerated the virus’s global spread. China’s manipulation of information continues to hamper response efforts. Now, as the world wrestles with the pandemic—and its human, economic, and social costs—Beijing sees an opportunity and is maneuvering to seize it.

Tian Feilong of Beijing’s Administrative Review Committee summarizes the plan neatly: “The epidemic will deepen Western reliance on China.” It “will support an expansion of China’s soft and hard power.” It will “deepen Sino-Europe 5G cooperation,” all while “structurally reducing US political and economic force.” “The US economy will decline.”

According to Beijing, this opportunity is akin to that of the 2008 financial crisis but bigger. China used the opening presented by the 2008 economic downturn to reach parity. In the coronavirus, Beijing sees the chance to win. This time, China benefits from a near-peer strategic position. It also benefits from first-mover status. China has the temporal advantage: the coronavirus began in China (for the record, in the very city that houses Beijing’s leading virology research institute, a World Health Organization reference lab that stores and studies a range of severe pathogens). China says its workers are already returning to the job. They are positioned to outpace their global peers and capture global demand once developed economies return online, months behind China.

Authoritative Chinese sources are explicit, and near-unanimous, on the subject. The phrase “seize the opportunity” has become encoded in official policy from the national down to the local level. That policy shows Beijing maneuvering, swiftly.

China’s gambit begins at the industrial level, with moves to spur production and export of strategic goods: Pharmaceuticals and medical supplies, but also microelectronics, manufacturing materials, and agricultural products. The goal, as Han Jian of the Chinese Academy of Sciences puts it, is to “turn the crisis into an opportunity to increase global dependence on ‘Made in China.’”

Beijing is also preparing to export the domestic systems of monitoring, surveillance, and information that it has set up for the epidemic internationally, couched under “relief” efforts. Beijing responded to the coronavirus at home with an unprecedented—even by Chinese standards—information control and collection system: local “tourism” data centers track movements of “sensitive populations” from town to town; temperature checks on public transit systems sort people; facial recognition on worksites flags anyone who takes it off his mask. All connect to the social credit system. This, explain Chinese experts, “will become the basis for future smart city construction.” Already, The Information Center at China’s Institute of Safety and Environmental Protection is creating a database to “track the epidemic overseas.”

Beijing is carrying out this vision with targeted subsidies, loans, bailouts, export credits for domestic champions. It is also launching new avenues and simplified measures for foreign investment so it can attract global capital—and direct it. It is deploying People’s Money transactions, also known as RMB transactions, on Chinese economic systems. It is spreading a fact-lite narrative of stability; a portrait of itself as the sole healthy global player. China is also, for the record, suspending deadlines on firm information disclosures—ensuring control of its domestic economic narrative.

Neither intention nor tools are new. Beijing is simply accelerating an existing strategic vision and approach, one premised on co-opting networks, standards, and platforms to assume global hegemony. America is down. Beijing is kicking. And it is drawing on the full arsenal of non-market tools to do so.

So, what is the United States to do? First, relief measures need to address the immediate public health crisis. Unprecedented times call for unprecedented measures. America should consider steps akin to wartime mobilization, up to and including imposing a temporary national holiday that closes markets, commerce, and borders and activates necessary industrial attention to critical supply needs.

The next relief prong is industrial support beyond the immediate. And that one should be crafted in a competitive fashion: Measures to restore our free enterprise systems, supply chains, and industries, should be informed by the adversary’s attempt to take them down; should be based not just on the epidemic’s threat, but also on China’s. This is where America learns to accept that Beijing has turned the crisis into a competition. America must invest not just to heal, but to win.

Beijing’s propaganda irrespective, today’s crisis should underscore, globally, that China is not a market player. Beijing is not, never was, and has no intention of becoming the “responsible stakeholder” it promised to be when welcomed into the World Trade Organization. Integration with such an actor comes at a severe cost. It can no longer be ignored. Italy, the Belt and Road’s first large keystone in Europe, is realizing that cost in real-time. U.S. biomedical supply chains reveal the same costs proliferated throughout even the most critical U.S. market segments.

America cannot afford to trade long-term security for short-term profit. Upon recovery, our financial markets should update their logic to punish industrial actors who ignore the material risks of dependence on an authoritarian, nonmarket actor, whether as a vendor or a customer. The leaders of “Big Tech,” pharmaceuticals, telecommunications, energy, and next-generation industrials (Internet of things, advanced manufacturing, new energy vehicles) should resolve to define an affirmative future that benefits American workers, allied economies, and common values that create peace and prosperity—when global stakeholders act responsibly.

And the U.S. government should provide initial momentum—now, in a time of crisis. This is not about picking winners and losers. It is about picking the United States, our trusted allies and partners, and our shared values—the values that will animate our resilience in the challenging weeks ahead—and no longer allowing rule-bending, authoritarians a seat at the table.