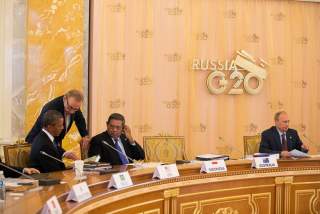 What is playing out in Ukraine is the culmination of a decades-old argument between the West and Russia about post-Soviet Eastern Europe. The Washington-Brussels argument is that countries like Georgia, Moldova and Ukraine have the right to join the EU and NATO and that their accession to these blocs promotes security, prosperity and democracy in Eastern Europe. Moscow’s argument is that these countries’ joining exclusive Western alliances would harm Russia’s own security and economic interests and is therefore unacceptable. While the West rejects Russia’s position as unfounded, insincere and imperialist, it is likely to concede to Moscow and halt further expansion. Western leaders have shown a willingness to accept these countries’ neutrality and little appetite for prolonged, serious conflict with Russia. President Barack Obama recently said that neither Ukraine or Georgia are on a path to NATO membership and expanding the EU further east is very unpopular in Western Europe.

But what will make accepting this neutrality hard for many in the West, and therefore drag the conflict out, is the fear that, in compromising with Russia, we are compromising on our commitment to democracy in post-communist Europe. This fear stems from two beliefs: first, that NATO and EU expansion are the best guarantees of democracy in that region; second, that in opposing this expansion, Russia is really opposed to democracy in its neighborhood. As John McCain put it, “Vladimir Putin does not want a democracy on his borders. That would be a very bad example, from his point of view, to be set for the Russian people.”

The good news is that, despite these fears, Russia has shown no particular concern with democratization in its near abroad. To be sure, Moscow has bullied its neighbors and, in so doing, often hurt governments that were seeking democratic reforms. But a review of Russia’s recent relations with Georgia, Moldova and Ukraine—three countries that have seen significant improvements in democratic governance and that have found themselves in conflict with Moscow—shows no evidence that Putin intervenes to quash democracy. However, what Russia has consistently reacted badly to is these countries seeking NATO and EU membership.

We can conclude from this that, by not bringing countries into the EU or NATO, the West would not be condemning their democratic aspirations to Russian predation. We can further conclude that by pushing for expansion, we are only increasing the likelihood of Russia taking action against its neighbors, thereby undermining democratic reform. Seeing EU and NATO expansion as tools for promoting democracy may have made sense for that last round of East European entrants into these clubs. But as recent events have shown, this model cannot be replicated for the non-Baltic post-Soviet states, at least not now. Simply put, the West has shown itself far less willing and able to push this expansion than Russia has shown itself willing and able to block it. Therefore, it is time for the West to develop other approaches for promoting our values and interests in this part of the world.

Russia, its Neighbors and Democracy

Democratization is hard to measure, but researchers try. Groups such as Freedom House track indicators, like free elections and human-rights observance, and periodically assign countries democracy scores. This gives us at least a rough picture of how countries are (or aren’t) democratizing. Hans-Joachim Lauth at the University of Wurzburg produces a database that, once every two years, merges all the major democracy-rating studies into a Combined Democracy Index. This provides a basic measuring stick for changes in democratization in the former Soviet Union.

If Russia’s true aim in its near abroad is to suppress democracy, we would expect to see it punish countries when they democratize. At first glance, the misconception that Russia opposes democratization may make sense. Starting in 2002, Georgia, Moldova and Ukraine saw significant improvements in their democracy index, followed by a period of tension with Russia. A closer look at this picture, though, shows no real correlation between a country democratizing and Russia taking action against it.

After Ukraine’s 2004 Orange Revolution, as President Viktor Yushchenko and Prime Minister Yulia Tymoshenko pushed democratic reforms and sought EU and NATO membership, its relations with Russia worsened. In 2005, Moscow began demanding higher payments from Ukraine for natural gas and periodically cutting off its gas supply during the coldest months. Then, after Viktor Yanukovych became president in 2010, Ukraine’s democracy index fell dramatically and relations with Russia improved. However, the rapprochement in relations had in fact begun in early 2009, as Ukraine reached its high point on the democracy index, when Putin and Prime Minister Yulia Tymoshenko struck a deal ending the gas dispute. The current conflict, of course, started in 2012 when Russia began punishing Ukraine with economic sanctions as Yanukovich moved closer to an association agreement with the EU. That Ukraine’s democracy index had plummeted under Yanukovych counted for nothing, with Russia blocking its imports and disrupting gas deliveries.

Georgia’s experience mirrors Ukraine’s in some important ways. In 2003, mass protests over fraudulent elections sparked the Roses Revolution, which brought Mikheil Saakashvili to power. As Saakashvili pushed both democratic reforms and closer ties with NATO, Russia took punitive action. In early 2006 Moscow banned the import of Georgian wines, claiming they were contaminated. Over the next two years tensions built and in 2008 the two countries went to war over the disputed territory of South Ossetia. In 2010, though, as Georgia’s democracy index continued to improve, its relations with Russia also showed modest improvement. Following statements by Putin on the importance of good relations with Georgia, passenger flights between Moscow and Tbilisi resumed for the first time since 2008. In 2011, Georgia dropped its opposition to Russia’s World Trade Organization membership, finally allowing it to join that club after eighteen years of trying. Saakashvili’s party lost parliamentary elections in 2011 and presidential elections in 2012. While the new government is cautious in its approach to Moscow, Russian-Georgian relations have continued to improve as Tbilisi makes clear that it wants cooperation with both Russia and the West. This improvement has come as Georgia, according the democracy index, has never been more democratic. It reached its highest point on the index since it began in 1996 and, according to Freedom House, Georgian democracy only improved in 2013.

Moldova has seen a steady increase in its democracy index since 2002, and by 2012, it had the highest rating of all the non-Baltic former Soviet states. Over that same period, Moldova’s relationship with Russia was rocky. The two countries, though, have had periods of rapprochement and conflict between them has stemmed directly from Russia’s support for the separatist region of Transnistria and Moldova’s drive for closer EU and NATO ties.

In 2003, Russia thought it had struck a deal that would allow Moldova to reintegrate Transnistria, while keeping Russian troops in the disputed region until 2010. Under pressure from Western governments and protesters at home, though, Moldovan president Vladimir Voronin backed out of the deal. Russia continued to support Transnistria’s de facto independence, to which Moldova responded by blocking Russia’s WTO accession. Just as it did to Georgia, Moscow retaliated by banning the import of Moldovan wine and other products. But at the end of 2006, relations between the two countries began improving. Putin dropped the import ban and Moldova dropped its opposition to Russia’s WTO accession. In early 2008, Putin and Voronin again began discussing a resolution to Transnistria, and Russia signaled that it would back the breakaway region’s reintegration with Moldova if Moldova forswore NATO membership. No solution was reached, though, and in 2010, Moscow once again banned Moldova’s wines after its new government began seeking closer ties with the EU and enraged Russia by introducing a holiday mourning the country’s Soviet occupation. Now, as Moldova contemplates signing an association agreement with the EU, Russia has held military exercises in Transnistria, whose parliament recently voted to join the Russian Federation.

Georgia, Moldova and Ukraine have faced serious threats from Russia over the last decade, but as their experiences show, democratization itself does not provoke Russia. And, as Yanukovych discovered, rolling back democracy does not inoculate a country from Russian reprisal, should that country seek alliances with the West that Moscow opposes.

Many in the West have, in the post–Cold War era, retained the Cold War tendency to conflate a country’s geopolitical orientation with its domestic political system; if a country is allied with the United States and Western Europe, the thinking goes, that is synonymous with it being democratic. The effect of this thinking post-1991 has been to conflate efforts to promote democracy with efforts to roll back Russia’s influence. As recent history shows, Russia may be aggressive toward its neighbors, but it is not really concerned about how democratic they are.

Of course there is no guarantee that Russia will not undermine the sovereignty of its neighbors even if NATO and the EU does not take them in. The Putin regime has shown, most notably in Crimea, that it can mask or quickly change its intentions. The evidence, though, strongly suggests that this expansion has been a major irritant for Moscow and removing it could pave the way for a far more productive relationship and greater security in Eastern Europe. In any case, the West has shown a distinct lack of willingness to expend the resources necessary to absorb and protect non-Baltic, post-Soviet states, making further NATO and EU expansion pointless in any case. Beyond this, as many have noted, Russia’s economic and military power is very limited, so the West could counter any actual threat to consolidated democracies in Europe should it arise.