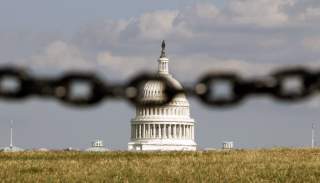 Congress has long exempted its own members from the laws and regulations it has imposed on all others. Most recently, this we-are-above the law position came into relief when the public learned the peculiar fate that awaits legislative branch employees who are sexually harassed in their workplace. They are subjected to a process unlike any other. It is hardly a small matter given that one in six female staffers on Capitol Hill said they had been sexually harassed in response to a July 2017 Roll Call survey.

By congressional rules (part of the Congressional Accountability Act), before the victim can file a complaint with the Office of Compliance (OOC) or file a federal lawsuit, he or she must undergo a three-month process: one month of legal counseling, one month of mediation, and a one month “cooling off” period. The victim is required to continue working in the office during this process, and before mediation can begin, they must sign a nondisclosure agreement. Harassers get legal counsel from the House of Representatives—but the victim cannot employ their own lawyer. Furthermore, any settlement money awarded as a result of this process comes from the U.S. Treasury—not from the party responsible for the harassment. A victim’s initial Formal Request for Counseling must be filed with the OOC no later than 180 days after the incident. For any other crime or misdemeanor, the time limit is set in years, not days. “It encumbers the victim in ways that are indefensible” said Rep. Jackie Speier. She added that it “is not a victim-friendly process . . . [but] an institution-protection process.”

The Whistleblower Protection Act of 1989, which protects employees of the federal government from retaliation should they report illegal activity or mismanagement, does not cover workers in the legislative branch. In recent years, bills attempting to remedy this exemption have been introduced in Congress but they have not put before the members for a vote. “For many years, whistleblowers in the federal bureaucracy have raised the alarm when they encounter fraud, waste or abuse at their agency, saving taxpayer dollars and improving government operations . . . Employees on Capitol Hill should also be encouraged to disclose problems without fear of retaliation,” said Sen. Chuck Grassley. Well, they had better note that they are on their own.

Another law that does not apply to Congress is the Freedom of Information Act. This became particularly relevant earlier this year when Rep. Jeb Hensarling, chairman of the House Financial Services Committee, drew criticism for his argument that communications between federal agencies and his committee “constitute congressional records not ‘agency records’ for purposes of the Freedom of Information Act, and remain subject to congressional control even when in the physical possession of the Agency.” Rep. Maxine Waters said it was “the height of hypocrisy for [Hensarling] to take such extraordinary measures to shield himself from the oversight of the American public.”

Only 13 percent of people approve of “the way Congress is handling its job,” according to a Gallup poll from October 2017. This is way below the low approval rating of the president. However, if more people were aware of the fact that Congress exempts itself from laws it imposes on the rest of us—the number may well be lower.

Amitai Etzioni is a professor and Professor of International Relations at The George Washington University. His book Happiness is the Wrong Metric will be published in Winter 2018 by Springer.