Congress Must Preserve the INF Treaty with Russia 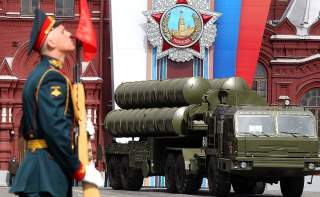 Congress, through a provision in the National Defense Authorization Act, risks endangering American national security by threatening the integrity of the Intermediate Nuclear Forces Treaty. The INF Treaty between the United States, Russia and twelve former Soviet republics prohibits the deployment of intermediate-range missiles, which have historically proven dangerously destabilizing. The original American goal of the treaty was to eliminate the Russian SS-20, a deadly ballistic missile; over time, treaty negotiations grew in scope to also include cruise missiles.

Russia is currently in violation of the INF Treaty by testing and deploying intermediate-range cruise missiles. However, by threatening to destroy the entire INF Treaty in response, Congress risks making matters worse by opening the door to Russian deployment of intermediate-range ballistic missiles in Europe.

The SS-20 was long regarded by the United States as a particularly dangerous threat. Negotiations over Intermediate Nuclear Forces with the Soviet Union, begun by President Ronald Reagan in the fall of 1981, had as the principal U.S. objective the limitation of the growing Soviet force of these modern, highly accurate, road-mobile, multiple independently targetable reentry vehicle (MIRV) missiles. The SS-20 replaced the older, less accurate, single-warhead ballistic-missile force deployed by the Soviet Union opposite Europe for many years. For the United States, the principal objection to the new deployment was that the Soviet Union appeared to replace essentially defensive deterrent weapons with offensive war-fighting weapons.

As negotiations proceeded, the range of prohibited weapons was expanded to a lower limit of five hundred kilometers and an upper limit of 5,500 kilometers, the borderline of nuclear weapon systems covered by the strategic arms treaties. Cruise missiles were added as weapons to be banned, and the INF Treaty area of obligation was increased to cover the entire territory of the Soviet Union and the United States. Yet, the primary goal for American negotiators was always to limit the SS-20.

The INF Treaty was signed in Washington in December 1987, and brought into force by Presidents Reagan and Gorbachev at the Moscow Summit in May 1988. It ushered in a new era of peace and security in Europe and it marked the beginning of the end of the Cold War. As Ronald Reagan put it when, as he and Gorbachev were on a brief tour within the Kremlin walls, a reporter asked whether he still believed that the Soviet Union was the evil empire: “No, that was another time, another era.”

The relationship that the United States maintained with Gorbachev’s USSR and the successor Russian Federation began to come to an end with Vladimir Putin’s consolidation of power. In particular, in February 2007 President Putin declared that the INF Treaty no longer served Russia’s interests. Some believed that Putin made this statement because some of Russia’s neighbors, namely China, began to develop modern medium-range ballistic-missile systems. However, the Russians blamed the U.S. deployment of missile-defense technology in eastern Europe. Over repeated U.S. objections, Russia proceeded to test a new ground-launched cruise missile to a range beyond the limit of five hundred kilometers, and later initiated its deployment. In July 2014, the United States first publicly complained of Russian treaty violations, and described unsuccessful efforts to bring Russia back into compliance in a report released in April 2017.

The U.S. House of Representatives, however, appears to be on the verge of making this difficult situation far worse. In the FY18 National Defense Authorization Act passed by the full House Armed Services Committee, Congress would, if this provision remains in the bill, require the United States to develop a new noncompliant missile system that, if tested, would violate the treaty. The bill also legislates that the United States would no longer be bound by the INF Treaty if Russia remains in violation.

What could please President Putin more than for the United States to take this step? Russia would love to be freed of all its INF Treaty obligations so that it could restart building SS-20-like ballistic-missile systems, and thereby threaten all nations on its periphery. The problem of the Russian cruise-missile system is serious and must be resolved, but in attempting to either bring Russia back into treaty compliance or develop appropriate countermeasures, the United States should not preemptively throw out the treaty in its entirety. Such an action would release all limits on Moscow’s intermediate-range nuclear forces that have strengthened U.S. and allied security for three decades.

Amb. Thomas Graham Jr. served as a senior U.S. diplomat involved in every major international nonproliferation and arms-control negotiation in which the United States took part from 1970 to 1997. Ambassador Graham is a member of the National Advisory Board of the Center for Arms Control and Non-Proliferation.

Image: Military parade on Red Square on May 9, 2011. President of Russia