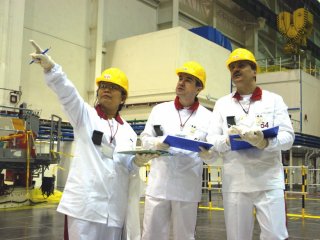 American security imperatives today include containing Iran’s nuclear activities, rolling back North Korea’s nuclear weapons program, and keeping nuclear and other radioactive materials out of the hands of terrorists. Central to these efforts is the International Atomic Energy Agency (IAEA), a Vienna-based technical organization with the expertise and the global credibility to monitor the world’s most sensitive technologies and materials. The United States has major responsibilities for IAEA oversight, and this requires a strong and capable ambassador. Laura Holgate, the president’s nominee to serve as U.S. representative to the IAEA, is eminently qualified and has been awaiting confirmation for many months. The senate should confirm her immediately.

The IAEA’s responsibilities are greater today than at any point in its sixty-year history. Agency inspectors are continuously and intrusively monitoring Iran’s nuclear activities. At the same time, the IAEA monitors the nuclear programs of over 1,200 nuclear facilities around the world to ensure that countries are not producing nuclear weapons.

Only the IAEA can realistically meet these monitoring needs. Sovereign countries, including the United States, would naturally recoil from other governments closely inspecting their nuclear activities. Yet these same countries trust the IAEA with commercial and technological secrets, because of its global reputation for technical competence and objectivity. The IAEA will soon assume a larger role in sustaining the global effort to secure sensitive nuclear materials, in part because there is no other organization in the world today with the knowledge and credibility to do so.

Nevertheless, the IAEA’s objectivity and technical competence is under constant strain from sources without and within. Led by Russia, a growing movement in the IAEA’s thirty-five-member governing board is challenging the agency’s entire approach to assessing whether countries are engaged in secret and suspicious nuclear activities. Recently, Russian diplomats have questioned the objectivity of the agency’s technical experts and its independence from the narrow interests of individual member states. Observers to this debate will rightly harbor doubts about the IAEA’s ability to serve as the world’s unbiased nuclear detective in the face of these attempts to politicize the IAEA’s work.

Compounding these geopolitical pressures are budgetary shortfalls and complicated organizational politics. The IAEA’s nuclear-nonproliferation and nuclear-security responsibilities are greater than they have ever been, but disputes among member states have resulted in two decades of zero real budgetary growth. Contributions from member states, including the United States, have not kept pace with mounting demands on resources and expertise.

The United States has a vested interest in doing more. Every dollar spent on the IAEA improves American security from the nuclear threat. But the United States must constantly marshal support and consensus for the IAEA’s most critical roles. Painstaking diplomacy and firm resolve brought Iran to the negotiating table and produced a deal which can improve international security. The Iran deal has yielded a real, if temporary, peace dividend. Other nations should come forward and show their appreciation and their support for implementing the Iran deal with greater resources and stronger commitments to gradual and responsible budgetary growth. We are less likely to see renewed support from member states without a highly experienced ambassador on the scene.

Ms. Holgate has over fourteen years of experience working to keep nuclear weapons out of the hands of malevolent states and terrorist groups. She exemplifies American leadership on nuclear security, serving as the principal U.S. government organizer for the Nuclear Security Summits since 2009 and leading the global effort to destroy Syria’s chemical-weapons stockpile. She has proven skills and the dedication to pursue needed reforms—reforms that will not happen without American leadership. The United States needs Ms. Holgate responding to Russia’s efforts to politicize the IAEA, coaxing greater commitments from recalcitrant member states, and maintaining careful and objective international scrutiny of Iran’s nuclear activities.

Every president since the end of the Cold War has warned that the spread and use of nuclear weapons is one of the greatest threats to the existence of the United States. As former members of the military, we agree. Forestalling mankind’s greatest threat requires champions on the front line of a global effort. Laura Holgate has been one of those champions. We need her in Vienna now.

Brigadier General Robert Barnes retired from the Army in 2001 after thirty-two years of service. He started his career as an Air Defense officer, and among other assignments commanded nuclear custodial units associated with allied Nike Hercules air defense units in Europe. Lieutenant General John Castellaw’s service in the Marines spanned thirty-six years. He was with the UN during the Siege of Sarajevo, commanded a U.S. joint force in the multi-national security and stability operation in East Timor, and served as the chief of staff for the U.S. Central Command. Lieutenant General Dirk Jameson retired from the U.S. Air Force in 1996 after more than three decades of service. General Jameson’s final assignment was as Deputy Commander-in-Chief of U.S. Strategic Command. General Jameson commanded the Twentieth Air Force and was responsible for the intercontinental ballistic missile forces.