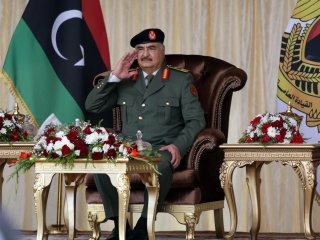 Khalifa Haftar, the Libyan warlord who took part in the 1969 coup that brought Muammar Gaddafi to power, made his international debut after Libya lost its war with Chad in 1987. Imprisoned by Chad, Haftar was eventually released following a deal with the U.S. government, in which he became a CIA asset and later a U.S. citizen. In the late 1980s eighties, someone like Haftar was of great value to the United States because Libya topped the list of terrorist countries; America wanted access to and intelligence from Gaddafi’s inner circle. But Haftar, who was usually decked out in over-the-top military uniforms and always boastful of his connections and military prowess, never won any wars or even a small conflict.

In 2014, as the self-declared military leader of eastern Libya, Haftar launched “Operation Dignity,” which he branded as a fight against the “terrorism and extremism” of ISIS and Ansar al-Sharia in Derna and Sirte. While Haftar did launch air strikes against Ansar al-Sharia, his primary goal was attacking revolutionary forces loyal to the government so he could grab power. In fact, Haftar gave the ISIS militants that he was supposed to be fighting free passage from Derna to Sirte, a trip of some 450 miles through the oil crescent that he controlled. It was only in 2016 when Misrata-led pro-government forces from western Libya (whom Haftar’s public relations machine labeled as “beardos”) managed to eliminate ISIS’ presence in Sirte with the help of U.S. air support. Haftar also recruited ultraconservative Salafi Madkhalists along with Syrian and Chadian mercenaries to make up most of his “Libyan” National Army militia.

Following the UN-brokered 2015 Shkirat agreement, Fayez al-Sarraj, who was the head of the internationally recognized Libyan government, secretly negotiated a political settlement with Haftar to try to stabilize Libya. Simultaneously, then-UN envoy Ghassan Salamé was diligently working to get all Libyan political factions to agree on elections and a peace process; his announcement of the Libyan National Conference, set to take place from April 14 to 16, 2019, in Ghadames, was considered a breakthrough. Even the UN secretary-general visited Tripoli on April 5 to show support for Salamé’s achievement.

However, Haftar believed the Ghadames conference would end his chance of becoming the next Gaddafi and the absolute leader of Libya. His key financial backers, Saudi Arabia and the United Arab Emirates, pledged millions of dollars for his seizure of Tripoli and sent him combat supplies, an action which is now being investigated by the United Nations for violating an arms embargo. Because of Haftar’s Tripoli offensive, the Ghadames conference never happened, and the warlord’s failed crusade displaced 200,000 people, resulted in Tarhuna’s mass graves, and further divided an already divided Libya.

Haftar’s deadly escapade also emboldened Russia. The warlord, who became a strong Kremlin ally, welcomed Russia’s Wagner Group to fight for his cause. And Russia, never one to pass up an opportunity in the region, gradually took control of several Libyan military bases. Russia’s investment in Haftar has been substantial, and it includes printing billions of counterfeit Libyan dinars to support Haftar’s war effort, which has created chaos in Libyan fiscal policy. In May of last year, Malta seized a shipment of 1.1 billion of these counterfeit dinars, provoking a strong rebuke to Russia by the international community. Russia has become so bold in Libya that it no longer hides behind the mercenary status of Wagner Group—the Kremlin recently put Russian military personnel on the ground in Libya.

To be clear, Haftar is not Libya’s only problem, but he is the largest obstacle preventing his country from moving forward. Haftar is still receiving substantial financial assistance, and he recently hired President Bill Clinton’s former aide Lanny Davis and ex-Republican House Leader Bob Livingston as pitchmen to present him in a positive light and to “advocate for the December 24, 2021, elections in Libya.” Haftar rules eastern Libya with an iron fist; it is a police state with an Islamic twist and no freedom. Haftar cannot run for the Libyan presidency unless he gives up his U.S. citizenship, but he might nominate one of his sons to run instead. He has already appointed them military leaders despite their lack of military training or background.

Libyan families have filed civil lawsuits accusing Haftar of war crimes, human rights abuses, and torture in a U.S. federal court, and it is hard to imagine the United States would endorse any part of Haftar’s political life. In fact, the U.S. Congress should seriously consider holding a hearing on Haftar’s destructive role in Libya and examining how a U.S. citizen can operate how he has without facing consequences. Haftar, with his hopes of becoming the next authoritarian leader of Libya, has seriously endangered U.S. national security and the security of the North Atlantic Treaty Organization’s southern flank by aligning himself with the Russian military and paramilitary establishments—all while committing war crimes. Despite his American citizenship, Haftar is no friend of the United States.

Sasha Toperich is senior executive vice president of the Transatlantic Leadership Network. From 2013 to 2018, he was a senior fellow and director of the Mediterranean Basin, Middle East and Gulf initiative at the Center for Transatlantic Relations, at the Paul H. Nitze School of Advanced International Studies at Johns Hopkins University in Washington, D.C.

Debra Cagan is the Distinguished Energy Fellow at the Transatlantic Leadership Network and worked as a career State Department diplomat and Defense Department official from the Reagan to Trump administrations, including serving as deputy assistant secretary of defense for coalition, peacekeeping, humanitarian and disaster relief where she headed coalition operations for Iraq and Afghanistan.