Congress Splits Over Trump and Iran 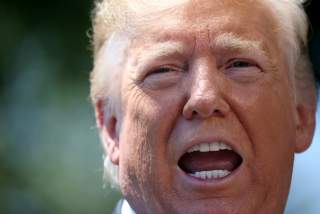 If the Middle East is in a state of crisis, Washington, DC is in a state of chatter. President Donald Trump’s last-minute decision to call off a planned strike against Iran has left the political class arguing with itself about U.S. power in the region and Donald Trump’s judgment. The strike was meant to be a response to Iran’s downing of an unarmed, unmanned, U.S. aerial drone earlier this week. The United States claims it was flying over international waters, while Iran claims the drone had entered its airspace.

When told the strike would was expected to kill 150 people, President Trump said he called off the strike because it was not a proportionate response. According to reports, Secretary of State Mike Pompeo, National Security Advisor John Bolton, and CIA Director Gina Haspel were all in consensus to carry out the strike. Instead, the president said he wishes to continue the campaign of “maximum pressure” to either break Iran economically or force them into major diplomatic concessions.

The hawks who make their nest in the capital city are not pleased. Appearing on the Hugh Hewitt Show this morning, Congresswoman Elizabeth Cheney (R-WY), the third-ranking House Republican, made her displeasure known. “I think that we simply can’t allow America’s adversaries to think that they can shoot down a U.S. military drone with impunity, or with the consequence (as we’re seeing in reports) being the United States responds by pleading for talks,” she said. Her father, former Vice President Dick Cheney, advocated a war with Iran in 2007 but was overruled by then-President George W. Bush.

“Iran has crossed a line with their latest attack on the United States over international airspace, and it’s time we let the regime know that these egregiously misguided actions have very real consequences,” wrote Congressman Adam Kinzinger (R-IL) in a FOX News op-ed this morning. “The U.S. military can end this desperate escalation by Iran pretty quickly, and while that’s not what we want to do, the military option must remain on the table. I certainly hope the military operation scheduled in retaliation was not called off because of a change in mind, but rather because of a tactical need. In 2013, then-President Obama notoriously canceled a strike on Syria and the ramifications from that decision are still being felt.” Kinzinger has been overtly critical of the Trump administration’s foreign policy since 2017.

The usual Iranian expatriates smell blood in the water. Last night, Reza Pahlavi, heir to the defunct Peacock throne, held a dinner event in the DC area. He’s still very interested in returning to rule as Iran’s monarch (as long as an outside power is willing to fight to install him). The People’s Mujahedin of Iran (MEK) held a rally outside the State Department this morning calling for regime change in Iran. The exiled Iranian opposition group lost its designation as a terrorist organization in 2012 and has since received vocal support from individuals such as the president’s lawyer Rudy Giuliani and National Security Advisor John Bolton. Congressman Brad Sherman (D-CA) spoke at the rally, calling the MEK “the future of Iran,” contradicting statements he made Wednesday where he sought assurances against regime change.

Restrainers, on the other hand, are happy that the president pulled back from the brink of military conflict. This morning both Senator Rand Paul (R-KY) and Congressman Thomas Massie (R-KY), both the most anti-interventionist advocates in their respective chambers, shared the same Business Insider article on Twitter which discusses President Trump resisting his pro-war advisors. Senator Paul urged the President “to trust HIS instincts,” while Congressman Massie pressed him to “[k]eep resisting the neocons…” So far, he is.

Hunter DeRensis is a reporter for The National Interest.