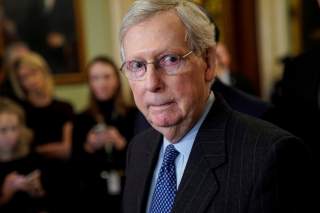 “Trump will be remembered for overseeing a dramatic weakening of the presidency—it’ll be back to Andrew Johnson days,” a prominent conservative close to the White House says.

Such is the sentiment among many of the president’s allies who back his proposed withdrawal in Syria and pullback in Afghanistan. The president, albeit inconsistently, has his priorities. But he is routinely stymied by his own knife-fighting subordinates and fellow partisans in Congress.

With the announcement by Senate Majority Leader Mitch McConnell this week that he will offer up an amendment to a Middle East policy bill, the senior senator from Kentucky has set the stage for an informal rebuke of the commander-in-chief. “The text of McConnell’s amendment is neoconservative,” writes John M. Donnelly in Roll Call.

McConnell is arguing that America cannot take its “foot off the gas” and must sustain the “strategies that are clearly working.” Another administration ally and veteran Republican activist characterized the attempt as the most forceful break by McConnell with Trump since he’s become president. And it has the making of the widest riff between McConnell and administration-friendly populists since McConnell’s war on former White House Chief Strategist Steve Bannon in 2017.

It is likely that McConnell, not National Security Advisor John Bolton, is the most ardent opponent of Trump’s new strategy yet. And this unwelcome development for the White House comes just as the president was served a stinging political defeat by the head of Congress’ other branch, Nancy Pelosi.

A parallel development: the McConnell row again has forced Trump into the corner of Kentucky’s junior senator Rand Paul. Senator Paul has a political understanding with McConnell—the majority leader endorsed Paul for president in the early days of the 2016 campaign—but they part company on foreign policy.

A core issue for many is McConnell’s use of the word “precipitous” to characterize American withdrawal from the region—laughable for critics of the war who note Afghanistan is now America’s longest war. “It is ludicrous to call withdrawal after 17 years ‘precipitous,’” Paul said Thursday, appearing on Fox News to rally the base to the president’s defense.

Critics of McConnell further note that this is the first time the majority leader has seemingly shown interest in restraining President Trump’s war powers—when he disagreed with him. McConnell steadfastly backed Trump’s right to strike at Bashar Assad in Syria in 2017 and 2018, sans congressional support. For aspiring reformers of the way the United States conducts itself overseas, it’s rather inconsistent of McConnell to invoke a need for congressional oversight, when there has been no greater handmaiden of status-quo approaches elsewhere. Most notably, he was the Hill’s executioner earlier in the administration of an updated Authorization for Use of Military Force (AUMF).

But McConnell’s gambit is audacious because he is breaking with the president he has worked so effectively to reshape America’s judiciary and reform its tax system—career-long goals for the majority leader. On this measure, McConnell is acting out of a seeming, genuine conviction to keep the United States in Syria and Afghanistan.

A source familiar with the senator’s thinking indicates that Sen. Jim Risch, the new Senate Foreign Relations chair, is skittish on the maneuver, wary of insulting the president at the very least. Nevertheless, on Thursday afternoon, the Senate approved McConnell's amendment rebuking Trump.

With the fresh McConnell drama, Trump’s foreign policy is under strain on the Hill from both hawkish and realist right. Elsewhere, opponents of U.S. sponsorship of the war in Yemen are plotting their killing stroke.

Sens. Bernie Sanders, Mike Lee and Chris Murphy, along with Reps. Ro Khanna and Mark Pocan, re-introduced legislation to force a vote on ending U.S. support of the Saudi-led coalition this week.