Congressional Priorities in the Year 2020 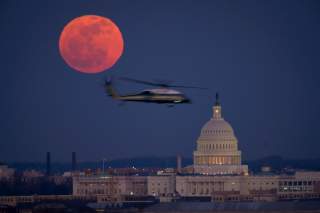 With lawmakers returning from their holiday break, it will begin the second half of the 116th Congress. The second year of any Congress is typically truncated and lighter in terms of passing legislation as members become increasingly focused on campaigning and adjourn early to prepare for elections. This becomes even more pronounced in presidential election years like 2020. While the House and Senate may remain in session during these times, meaningful business will wind down quickly after the nomination conventions in the summer.

The year 2020 will be an even more unique year for policymaking given that President Donald Trump was recently impeached in the House, and the Senate will prepare for a trial that will consume much of the remaining oxygen in Washington. However, putting aside the impeachment and campaign distractions—or possibly because of these distractions—there will be time and ample appetite during the year to address important issues in foreign policy and national security. Here are some pressing concerns Congress should prioritize before the November elections:

Extract Ourselves from Unwinnable Wars

The so-called Afghanistan Papers published by the Washington Post in early December provide a shocking and stark portrait of the national security community’s campaign over the past two decades to mislead Congress and the public about U.S. progress in Afghanistan to maintain support for America’s longest-running war. Unfortunately, the release of this report was overshadowed by the culmination of the impeachment process in Congress, which buried media coverage and thoughtful analysis on the issue.

A thorough investigation led by the national security and foreign policy committees into these findings and into the reporting and measurements of success in other conflict zones could lead to the realization of campaign promises by presidents from both parties to end these unwinnable wars and prevent us from entering new ones. Reenergized oversight efforts would likely be welcomed by the American people, who have become increasingly war-weary and distrustful of how our military is being used around the world. Congress and the national security community could then start recalibrating their strategic focus and budgeting toward better defined national security interests for the twenty-first century, strengthening our nation’s long-term security.

The old political axiom that there are “no permanent alliances, only permanent interests” has held true in recent years with the conduct of treaty-bound allies like Turkey and the ever-expanding list of potential new NATO members who bring no benefit to an alliance with the United States.

Unfortunately, Congress has been little more than a rubber stamp on the whims of our alliance leaders since the end of the Cold War and only a few members have given serious thought to reforming bilateral or multilateral alliances and refocusing our alliance structure towards core national interests.

When it comes to reforming alliances and reducing the burden of international security on the United States, NATO is rightly the first organization that comes to mind.  From Turkish leaders who pursue their own interests regardless of their allies’ concerns to European nations that make little effort to meet basic defense budgeting goals, NATO burden-sharing initiatives and alliance improvement initiatives have long been necessary but neglected. But Congress would be right to also examine bilateral relationships with countries like Saudi Arabia, whose war in Yemen and escapades elsewhere have drawn the United States into conflicts where it has no security interests.

At the same time, there are important geopolitical relationships with countries like China, Russia, and Iran that have been weakened in the past decade. Improving these relationships does not mean acquiescing to unacceptable behavior like election interference, unfair trade practices, or supporting terrorism. Instead, improved relationships could be used to help reduce U.S. military commitments, de-escalate tension in important economic zones, and more effectively push back against belligerent activities. Avoiding unnecessary military or economic conflict is in the direct national interest of the United States and is something within the power of Congress to impact. This may take the form of more difficult actions like reducing sanctions or reentering arms treaties, but it is a worthwhile exercise to at least examine ways in which these relationships could be improved.

Congress has an opportunity in 2020 to focus on important national security and foreign policy issues in ways that will be more difficult with a new or returning president carrying an electoral mandate in the following years. The legislative branch could address these priorities and reassert its Article I powers over war-making and budgetary control that it has ceded over the past decades, strengthening the United States both domestically and internationally in the future. The past decade will hardly be remembered as one full of American foreign policy victories, but 2020 offers the chance for a fresh start.

Robert Moore is a Public Policy Advisor for Defense Priorities, Inc.  He spent nearly a decade as a staff member on Capitol Hill, most recently as the lead staffer for Senator Mike Lee (R-UT) on the Senate Armed Services Committee while also advising on foreign relations, intelligence, and homeland security.