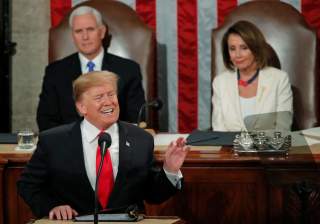 On the eve of then-President-elect Donald Trump’s inauguration, the United States and North Korea were in the throes of successive rounds of escalating nuclear tensions. Fast forward two and a half years, President Trump and Chairman Kim Jong-un are preparing for a second summit in Vietnam and North Korea has not conducted a single nuclear test in eighteen months. No matter where you stand on one of the most challenging national security debates in history, there is simply no denying that the Trump Administration has presided over a de-escalation of tensions with North Korea. President Trump must leverage this progress to extract meaningful commitments from Kim in Vietnam next week.

As co-chair of the Korean caucus in Congress, I gained an on-the-ground understanding of the North Korean regime’s mentality when I visited Pyongyang in 2003. The trip turned out to be an orchestrated propaganda tour of the country, with every meeting and detail staged so as to distract the Congressional delegation from the country’s grim realities. Over the years, the North Korean regime has employed a similar façade in successive rounds of negotiations with the international community. They have repeatedly come to the table and made bold commitments only to renege once any meaningful concessions are made—including as part of the Six-Party Talks in 2008 and the Leap Day Agreement in 2012.

That’s why President Donald Trump must insist on continuing his strategy of peace through strength with North Korea, a notable departure from the past administration’s insistence on “strategic patience.” This strategy has already yielded unprecedented dividends, including the release of three Korean-American hostages and the handover of remains of U.S. troops missing in action during the Korean War. But thankfully President Trump has made it very clear just this week that absent meaningful progress on Pyongyang’s nuclear program, the Kim regime will not enjoy any much-needed sanctions relief.

After the landmark summit in Singapore last year, questions abounded regarding the precise meaning of denuclearization. President Trump should make it clear to the North Korean regime next week that the United States is committed to the full dismantling of Pyongyang’s nuclear program, while underscoring that Washington will not abandon its security commitments to Seoul. Ideally, a concrete and detailed framework for implementation of North Korea’s denuclearization should emerge from the Vietnam summit, including specific measures and timetables. If not, at the very least the talks should conclude with a clear understanding of each side’s demands, unlike the vague pledges that followed the last summit.

At the same time, the United States should not make the same mistakes that befell the negotiators of the Joint Comprehensive Plan of Action (JCPOA) with Iran. We must not isolate negotiations on North Korea’s nuclear program from efforts to advocate on behalf of the human rights of the North Korean people. Sanctions in place on North Korea as a result of the country’s glaring human rights record must stay in place regardless of any potential progress on the nuclear front. Now that North Korea is at the table, after hurting from a painful regime of international sanctions, the United States must use its leverage to urge the Kim regime to respect the human rights of its own people.

Unprecedented progress with North Korea has been achieved thanks to the leadership of President Donald Trump. Although the details of a potential deal have not emerged, this administration has pushed us back from the brink of nuclear war to the security of the negotiating table. Whether or not the North Korean will negotiate in good faith remains to be seen. The United States will need to hold steadfast to its principles and emerge with the best deal possible under the circumstances. In the words of President Reagan, “peace is not the absence of conflict, it is the ability to handle conflict by peaceful means.” I am hopeful that President Donald Trump will manage this conflict, bearing in mind the interests of the American people, by peaceful means.

Congressman Joe Wilson is the representative for the Second Congressional District of South Carolina. Wilson sits on the House Foreign Affairs Committee, where he is the ranking member of the Middle East, North Africa, and International Terrorism Subcommittee.