Conservatives Can Fix the United Nations 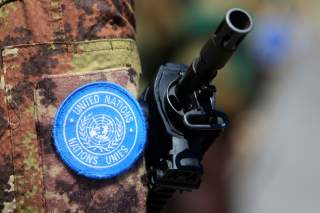 Many conservatives despise the United Nations. “The Secretariat building in New York has thirty-eight stories,” John Bolton said in 1994 while a lawyer in the private sector. “If it lost ten stories, it wouldn’t make a bit of difference.” Bolton’s subsequent tenure as ambassador to the United Nations and now National Security Advisor has not changed his attitude. While Bolton focused his criticism on UN inefficiency, criticisms of the almost seventy-five-year-old institution range the gambit: encroachment on sovereignty, impunity of its officials, corruption, anti-Semitism, obsession with if not malice toward Israel, and even violations of the Geneva Conventions.

The Many Criticisms of UN

On most counts, critics are correct. The UN of today bears little resemblance to the body envisioned at its creation. The UN had its beginnings against the backdrop of World War II, when the United States, United Kingdom, Soviet Union, and Republic of China met at the Dumbarton Oaks Conference to begin the process that would culminate in the UN’s formation on October 24, 1945. The original UN had four goals: To keep peace throughout the world; to develop friendly relations among nations; to help nations work together to improve the lives of the poor, and to encourage respect for each other’s rights and freedoms; and to harmonize nations to achieve these goals.

In practice, such broad and heady ambitions have given cover to an ever-expanding array of organizations, easy to form, easier to expand, and almost impossible to end. The UN created the United Nations Relief and Works Agency for Palestine Refugees (UNRWA) in 1949, for example, to address Palestinians displaced by Israel’s 1948 War of Independence. In 1951, UNRWA outlined a three-year plan to resettle Palestinian refugees and, yet, sixty-five years later, UNRWA has a nearly $1 billion budget, even as the number of first generation displaced or refugees dwindles to just a few thousand. Or, consider the United Nations Mission for the Referendum in Western Sahara (MINURSO), created in 1991 to survey Sahrawi refugees about desired final status for the Western Sahara. Almost thirty years later, the UN has spent hundreds of millions of dollars, and no referendum has been held. The UN funds special rapporteurs to promote the Venezuelan model, even as millions of Venezuelans choose between flight from their socialist paradise or starvation. The UN has only retired one specialized agency—the International Refugee Organization—but that quickly replaced by the UN High Commissioner for Refugees (UNHCR). A quarter century after Palau, the last trustee, won independence, the UN Trustee Council technically still exists. Put another way, when founded, the UN Secretariat included three hundred persons, a number which expanded ten-fold in its first six months. In 1991, the UN more broadly employed fifty-two thousand people worldwide. Twenty-five years later, the number was approaching one hundred thousand.

In Congress, many Republicans seek to curtail, if not end U.S. funding of the United Nations over that organization’s inefficiency. Rather than effectively supervise the UN’s internal operations, successive secretaries-general have viewed their position as an invitation to jet set and bloviate. Other UN officials saw in budget talks an opportunity to drink free booze rather than promote accountability.

The UN makes congressional cynicism easy: Saudi Arabia, Qatar, Pakistan, Egypt, China, and Eritrea sit on the UN Human Rights Council. UNRWA employs members of designated terrorist groups, embraces incitement in its classrooms, and has enabled its schools to be used as depots for weaponry. UNIFIL acknowledges illicit tunnels have been dug under its watch, but refuses to finger Hezbollah. North Korea, meanwhile, has chaired the UN Conference on Disarmament. In 2002, former Irish president Mary Robinson and UNHCR chair organized the Orwellian “World Conference against Racism, Racial Discrimination, Xenophobia and Related Intolerance,” which bestowed a UN imprimatur on anti-Semitism and racism. And the list goes on. For all the UN’s grandiose rhetoric about women, it prevents divorced wives of UN diplomats from collecting a portion of their ex-husband’s pensions, often leaving them destitute. And, while the UN talks a big game about climate change, its conferences produce little more than hot air and its finding notoriously do not stand the test of time; rather, it seems its organizers purpose has more to do with expanding government controls over the economy than anything to do with climate.

Over the decades, there have been many calls for reform and, in recent years, the UN leadership has also acknowledged the need for reform, albeit perhaps more to co-opt the process than to engage it substantively. Within the United Nations, many efforts have focused on expanding the Security Council to bring countries such as Germany, Brazil, India, or Turkey into the mix. The late Secretary-General Kofi Annan spoke a great deal about streamlining internal UN functions, but he also presided over, perhaps participated in, and certainly sought to cover up the UN’s greatest corruption scandal.

A congressionally-mandated bipartisan independent taskforce on UN reform included such common-sense proposals as creating a chief operating officer to oversee management, allowing the secretary-general to replace his top officials, and creating an oversight board with auditing powers. Again, many of its proposals fell victim to bureaucratic inertia if not hostility.

As every country in the UN General Assembly and on the UN’s various associated organizations gets an equal vote regardless of size or quality of government, the late Sen. John McCain proposed to create a new body, the “League of Democracies” into which would be invested the moral authority that UN has lost. It is a good idea but it is no closer to fruition than it was when it was proposed more than a decade ago.

Most recently, Nikki Haley, until the end of last month the U.S. ambassador to the United Nations, made UN reform a top priority, not in opposition to the body but in cooperation with it. Alas, entrenched interests and organizations prioritizing politics over human rights stymied Haley’s efforts to reform the UN Human Rights Council. Theirs might have been a pyrrhic victory, however, as the council’s excesses delegitimize it and the broader human-rights advocacy in the United States and beyond.

Replicate What Works and Defund What Doesn’t

For all Congress complains about the United Nations, its 22 percent contribution to the UN budget gives it more leverage than it often uses. The Trump administration is absolutely correct to walk away from UNESCO and the UN Human Rights Council over the politicization of their mission. But while disassociating from UN bodies may bring some accountability to UN officials and delegations accustomed to operating without it may be productive, as productive is to recognize where the UN succeeds and replicate those successes.

UNICEF and other UN agencies may claim real results, but if these came at an expense far greater than that which smaller, private NGOs could accomplish—and they usually have—then they should not be something about which the UN brags. Indeed, the idea that the UN should compete with private NGOs or national aid organizations is symbolic of just how big and unwieldy the UN has become.

Peacekeeping is perhaps the primary activity in which the UN can contribute without duplicating the efforts of others. While many UN peacekeeping operations have been abject failures—think UNIFIL, under whose watch Hezbollah has rearmed with tens of thousands of rockets—others have been successes. It is these from which both the international community and the UN should draw lessons. The UN peacekeeping missions in Liberia, the Cote D’Ivoire, and Sierra Leone, for example, were crucial to reestablish peace and security to the countries. That UN peacekeepers abandoned offspring in Liberia is a blight on such success, but Secretary-General António Guterres can rectify such wrongs by demanding financial support from governments of the guilty peacekeepers at penalty of disqualification from their countries participating in future peacekeeping.

Other UN missions in Africa have had mixed success: peacekeepers in the Central African Republic protected the democratically-elected government from collapse and likely headed off a broader civil war, even as the behavior of some peacekeepers sullied the mission. In South Sudan, the UN protected perhaps two hundred thousand civilians from attack by the government showing that, after the disaster of Rwanda, the UN had learned some lessons.

As peace-keeping has become the UN’s chief success, it is ironic that, beginning toward the end of the Obama administration, the UN peacekeeping budget has declined. Unlike the bloated budgets and bureaucracy which plague UN aid organizations, UN peacekeeping is, at least according to the U.S. Government Accountability Organization (GAO), rather cost-effective. Conservatives do not have to love the United Nations nor paper over its problems. Instead, as Trump pursues his campaign promises to prioritize U.S. sovereignty, to extricate U.S. troops from protracted conflicts, and to cut waste, he and the Congress could find bipartisan consensus on an approach which would not only punish the UN financially for inefficiency, abuse, and malfeasance, but also recognize and reward it for its successes.