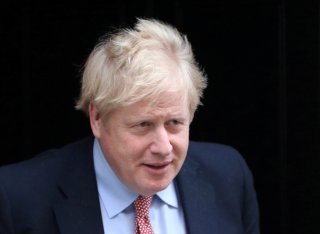 Throughout his career, and his barely hidden political ambition, Boris Johnson encouraged subtle comparisons with his war hero, Winston Churchill. There are videos on YouTube, where Johnson, a classics scholar himself, is observed to dissect the usage of chiasmus in Churchillian rhetoric. His hagiographic, but eminently readable book on Churchill makes all effort to highlight history’s “Great Man theory,” with all the subtlety of a rugby tackle.

Churchill, Boris wrote, “is the resounding human rebuttal to all Marxist historians who think history is the story of vast and impersonal economic forces. The point of the Churchill Factor is that one man can make all the difference.” And the political lesson that Boris drew from his idol was similar. “The key thing,” Boris added, “is to be Conservative in principle but Liberal in sympathy.”

The similarity was, however, always superficial. Churchill, for all his historical successes and flaws, was a true-blue conservative, an aristocratic lover of grandeur, order, hierarchy, and Cross-and-Scepter authority. Churchill was also far-sighted; he was cognizant of the shifting balance of global power and his greatest understanding was not the threat of Nazi Germany as a peer-rival, but the potential rise of a much larger global military power to the West, and his success was in shaping the direction of British grand-strategy under that favorable balance. Johnson, in comparison, is foppish and flippant, with a sartorial sense comparable to a second world war era milk-delivery boy. If Churchill was a character out of Kipling, Johnson is straight out of Wodehouse.

Johnson read the mood of the country, and won a remarkable victory uniting the historic middle England votes under a working class conservatism, and then spectacularly misread the popular mood by breaking with the rest of the Anglosphere, as well as his own Tory backbenchers, on Huawei and 5G. Like all post-Thatcherites, Johnson is at heart a socially-liberal free-marketer, and for all the irony in the world, with the British left relentlessly calling Johnson a fascist, when the time came to bring down the hammer of authority, Johnson dithered, unlike Churchill, who in his time of need, promptly doubled policing and rationing under a war-economy to pre-empt an establishment of order, during the Blitz. Realism demands state power and hierarchy in extremis, something which modern-liberals-pretending-to-be-conservatives, rarely understand.

History, however, has given Johnson an opportunity to emulate another, much older, nationalist-conservative leader. Like Johnson, and Churchill before him, Benjamin Disraeli was also a writer. Unlike both Johnson and Churchill, Disraeli was no liberal, and understood how state power can be channeled during times of crisis. Severe structural changes are ahead of Britain and the world, given the questions that rose from this crisis. And the arguments of free-market Thatcherism sound hollow, with the serious supply-chain issues facing Britain. In all fairness, British society has responded to the prime minister’s bugle. A fifteen-minute test at home could be available in a couple of weeks or so, according to a British official, as a British firm made rapid progress on that front. Seven F1 teams joined together to make ventilators for the National Health Service, just as British inventors and businessmen are awaiting production for their own models. The entire industrial base in the country has now geared up for wartime production. Retired nurses, firefighters, policemen, and other emergency workers, came back heeding the prime minister’s address, and an army of more than five hundred thousand volunteers registered to help. Bipartisan and benign nationalism, after all the Brexit acrimony, is still alive and well.

But feelings are never enough. The prime minister and his health secretary, and especially his chancellor did a lot recently to assuage fears and maintain the economic engine running, but the historic relegation of Britain to a service sector economy bodes ill for the post-Coronavirus future. Despite Chancellor Rishi Sunak’s valiant effort, the issue remains structural, and at odds with the stated vision, or at least the One-Nation rhetoric of post-election Boris.

For good or for bad, Johnson now understands that there are massive changes afoot. One, he urgently needs to create an independent strategic reserve initiative of medical supplies, fuel and weapons, and the reliance of other great powers (both the United States, and China) cannot be taken for granted. Likewise, further reliance on China is akin to criminal negligence, given Chinese mercantilism and profiteering off medical supplies in Europe, and it is a perfect time to decouple. That might not mean manufacturing would be back to the United Kingdom, but that surely must lead to the curtailing of the Chinese monopoly. Third, and most importantly, Britain needs to reassess its cooperation with the EU. There are already signs of intense distress within the EU regarding the handling of coronavirus, and this global shock might mean more stakes through the heart of institutions like the WHO and EU.

Nationalism, in both friendly and adversarial powers, will rise, and Britain needs to adjust accordingly. The secret of success in life, as Disraeli once wrote, is for a man to be ready for his opportunity when it comes. This is Johnson’s opportunity, to match his instinct with his actions. Only then will history remember him kindly.

Sumantra Maitra is a doctoral researcher at the University of Nottingham, UK. His research is in great power-politics and neorealism. You can find him on Twitter @MrMaitra.