Coronavirus Catastrophe: Endangering The Elderly Will Doom The Economy And Trump 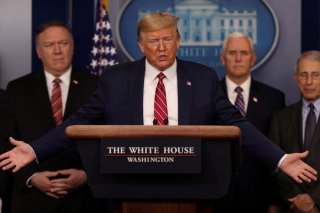 In his dystopian novel The Fixed Period, which was published in 1882, Anthony Trollope attacked utilitarian thinking. Trollope depicted a former British colony in 1980 called Brittanula that had adopted a compulsory program of euthanasia. During its first legislative assembly, Brittanula established a “fixed period” for the lives of its inhabitants—sixty-seven years old. The idea, as the narrator John Neverbend explains, is to ensure that Brittanula is not “burdened with the continued maintenance of those whose cares should have been made to cease” and to prevent the elderly from living “a useless and painful life." What was first adopted in a flush of enthusiasm by a younger generation, however, starts to look somewhat more daunting as the appointed date for departure from this earthly world starts to loom large.

It’s difficult not to think of Trollope’s foray into the future as a number of conservatives, including Texas Lieutenant Governor Daniel Patrick, speculate about the need to risk letting the elderly expire prematurely to save America. Patrick explained that seniors should be ready to be “sacrificed” to keep the economy going. Easy for him to say. As a high-ranking state official, Patrick knows that a hospital bed will always be open for him.

His insouciance about sacrificing a chunk of the population is being echoed by others on the right. In First Things, R. R. Reno has published a deeply foolish essay called “Say `No’ To Death’s Dominion.” In this case no seems to mean yes. Reno, in other words, wants to gamble with the lives of his countrymen.

A fierce opponent of abortion and the magazine’s editor, Reno now declares that maybe life isn’t always so important after all. He never says that it is the elderly that will be wiped out but suggests that “the truth is that only a small percent of the population of New York is at risk.” How does he know? Americans, we are instructed, have become overly enamored of “physical life” and, indeed, are indulging in a species of “sentimentalism.” Red-blooded Americans, Reno avers, should not “cower in fear” before the coronavirus. As Damon Linker, a quondam editor at First Things, points out in a column in The Week, “Reno apparently believes it would be vastly better for a couple million people to die over the coming months than for us to shelter in place for a few weeks.”

President Trump himself is being besieged by similar calls to lift the “social distancing” measures that have been instituted over the past two weeks and to let the economy rip, consequences be damned. In his press conference on Tuesday, Trump, as is his wont, pulled out of thin air an Easter deadline, declaring that it would be a “beautiful” date for Americans to buck up and get back to work. But beauty is in the eye of the beholder and the results of terminating the brief shutdown might well be very ugly indeed.

For one thing, Americans are not going to swallow the sacrifice of grandma and grandpa idly. The kind of Social Darwinism that some on the right are espousing is not only morally repellent, but also wildly impractical. The animal spirits of the economy that they seek to revive are scarcely going to enjoy a true revival if Americans remain afraid to congregate at work and at restaurants. Lifting the ban prematurely could prolong, not shorten, the severity and duration of the coronavirus. Talk about unintended consequences.

This is why New Jersey Gov. Phil Murphy was notably dubious about Trump’s declaration that he wants the entire country “opened up.” Murphy said, “I hope he’s right. I hope we get to April 12 and this is a transformed world, but the data that we’re looking at does not suggest that.” Quite the contrary. The death toll in New Jersey is rising.

Trump’s declaration is also a political blunder. It’s opened the field for former Vice-President Joe Biden to depict him as heartless and inept. Biden declared on Wednesday, “It would be a catastrophic thing to do for our people and for our economy if we sent people back to work just as we were beginning to see the impact of social distancing take hold only to unleash a second spike in infections. That’d be far more devastating in the long run.”

Do Republicans really want to run in 2020 as the party that tried to throw seniors overboard? Please. This feckless approach would not only run the risk danger of submerging the economy, but also of drowning the GOP’s political prospects for years to come.