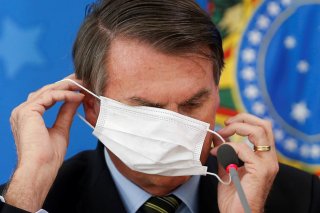 Latin America’s first case of COVID-19, commonly known as the coronavirus, was detected in Brazil on February 26. Four weeks later, there were 1,449 confirmed cases throughout Latin America and the Caribbean, according to data from the Johns Hopkins Corona Virus Resource Center. The disease has spread to at least 32 of the region’s 35 countries, sovereign states, and territories.

Like the U.S., many of these nations are still in the early stages of the virus’s proliferation. Infection levels have not yet peaked, meaning the actions taken by government’s now will determine the virus’s impact. Some leaders are taking proactive measures to prevent the spread.

Colombia, with 102 confirmed cases closed its border with neighboring Venezuela and recently declared a state of emergency. Its capital, Bogota, is under mandatory, 11-day quarantine, and mobility is restricted throughout the country. State and local governments have implemented curfews to enforce social distancing policies. An outbreak in Colombia would be disastrous, not just for Colombians, but for the nearly 2 million Venezuelans who have fled there to escape the Maduro regime and its odious policies.

Andean neighbor Peru has also declared a state of emergency, limiting people’s movement within the country and closing down heritage site Machu Picchu. To date, Peru has 155 confirmed cases and no deaths. Peru’s vulnerabilities are not only health-related. China’s economic downturn is impacting its trading partners, and China is both Peru’s top export market and its top trading partner.

Similarly, Chile faces economic vulnerabilities as well as public health challenges. China is its top export market and trading partner, too. With 238 confirmed cases, Chile’s President Piñera recently shut down the borders and banned events of more than 500 people. Enforcing limitations on public gatherings will be difficult, as massive anti-government protests continue in Chile. Only six percent of Chileans support Piñera, and protestors are still demanding his resignation and constitutional reform. The public unrest will probably inhibit the implementation of broader anti-viral measures, as well.

Further north in Central America, Panama’s efforts to prevent a coronavirus outbreak began long before the disease arrived to the subcontinent. Back in late January, Panama implemented additional screening measures on cargo ships, as Chinese ships are the primary users of the Panama Canal. Panama so far has 109 confirmed cases.

Excluding Panama and Costa Rica’s 69 confirmed cases, numbers throughout much of Central America have remained relatively low, but that has not stopped some leaders from taking an aggressive stance against the virus.

El Salvador has only one confirmed case, yet President Bukele has taken serious measures. In mid-March, he closed land borders, quarantined high-risk Salvadorans and foreigners, and banned foreign travelers. Earlier this week on Twitter, he accused Mexico of allowing 12 corona-infected passengers to board a flight bound for El Salvador.

This diplomatic spat will probably not be the last arising from Mexico’s mismanagement of the coronavirus. Despite 118 confirmed cases and advanced warning about the virus, the administration of President Andres Manuel Lopez Obrador has not yet taken the disease seriously.

Last weekend, the health ministry unveiled a social distancing plan to encourage people to avoid infecting one another. Yet that same weekend, Mexico City host a massive concert, with over 70,000 tickets sold. . Only later did the mayor postpone gatherings of over 1,000 people. Schools are still open and despite the social distancing policy, their president is still hugging and kissing supporters at rallies around the country.

Brazil’s response to COVID-19 seems similarly inadequate. Brazil has the most confirmed cases in Latin America, at 533, and was also the site of the first case. While local government officials have recommended aggressive social distancing measures, resistance from the federal government has watered down these policies. Only in the last few days have state and local governments started ramping up efforts and limiting public gatherings, but they will need to take a more forward-leaning approach if they are to get ahead of the curve.

Venezuela’s case is a nightmare that is going ignored by the international community. The Venezuelan people already live in a failed state governed by a criminal regime. Now, they have a new infectious disease outbreak to worry about. So far there are 36 confirmed cases.

The humanitarian crisis caused by Maduro has already left the vast majority of Venezuela’s 32 million people impoverished and without sufficient food or healthcare. This means the general population is going into this crisis at higher risk. Water, fuel, and electrical shortages are common, without even mentioning masks or medicine needed to combat the coronavirus. Recent outbreaks of infectious diseases like malaria and measles have spread beyond Venezuela’s borders to Brazil and Colombia.

Venezuela’s political situation does not bode well for a proper response either. Maduro and his cronies have pilfered Venezuela’s cash reserves and left Venezuelans with little means to care for themselves. To date, Maduro has implemented a “social quarantine” to keep Venezuelans home, but also to prevent social uprisings against his unpopular regime. Despite a lack of diplomatic relations, Venezuela’s health minister met with his Colombian counterpart to discuss the coronavirus outbreak. It remains to be seen how exactly Maduro will respond, but Venezuela’s conditions will undoubtedly lead to a deadly outbreak.

To date, El Salvador and Nicaragua have one confirmed case each, and Haiti has none. On one end, these countries have limited exposure as they have infrequent travelers from China and Europe. The lack of confirmed cases could also be the result of a lack of transparency from Nicaragua’s dictatorship, Haiti’s poor health infrastructure, or El Salvador’s proactive response early on.

Latin America is in the early stages of the coronavirus outbreak and regional leaders need to take bold, decisive steps to prevent a deadly outbreak.

Ana Quintana is a senior policy analyst specializing in Latin American affairs at The Heritage Foundation’s Allison Center for Foreign Policy. The case numbers cited are as of March 19, 2020.