The Coronavirus Comes for Taiwan 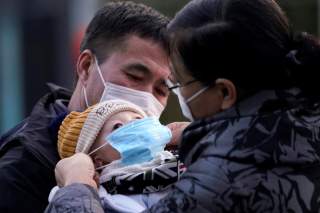 The first reported death from the Wuhan coronavirus occurred in China just days before Taiwan’s presidential and legislative elections on January 11. The day after Tsai Ing-wen was reelected, Beijing permitted two Taiwanese health experts to enter Wuhan to study the disease. Beijing honored a health cooperation agreement signed in 2010 though it was not clear in the week leading up to the visit that permission would be granted.

China had previously reneged on its promises with Taiwan before. In 2018, it unilaterally decided to open new flight routes in the Taiwan Strait, a move that Taipei vociferously protested. Allowing two Taiwanese officials to study the virus signaled that Beijing might ease its pressure campaign against President Tsai after her landmark reelection. Weeks later, it is clear that China abided by its agreement with Taiwan and would do no more to help.

As of early February, over twenty thousand people around the world have contracted the virus, with over four hundred reported deaths in China. While the focus rightfully has been on China and its response to the outbreak, China—and its proxies working in international organizations, such the World Health Organization (WHO) and the International Civil Aviation Organization (ICAO)—has worked to further squeeze Taiwan and its ability to combat the outbreak of the virus. The way in which China has treated Taiwan during the coronavirus outbreak in 2020 is indicative of the past four years and the likely path for the next four.

Getting the Virus under Control in Taiwan

As countries scramble to evacuate their citizens from Wuhan and the surrounding area, Taiwan asked for permission to evacuate its citizens. These requests were ignored by Chinese authorities for two weeks even as the United States and other countries were able to charter planes for evacuation. On February 2, the Taiwanese government learned through Chinese media that two hundred of the five hundred stranded Taiwanese would return to Taiwan. One Taiwanese was infected in Wuhan, but ten have contracted the virus in Taiwan. Everyone on the flight was given a health check.

The Tsai government announced that medical masks would be rationed to prevent hoarding and runs on stores and pharmacies. Each person can receive two masks per week (for NT$5) by showing their National Health Insurance card. Domestic producers of medical masks make $4 million per day, and the government announced that it would halt the export of masks to increase its supply. This system is meant to ensure that Taiwan does not run out of masks and that the country will be ready in the event that the virus spreads further throughout Taiwan. Tsai announced that the government would exercise “centralized procurement, centralized distribution, and centralized pricing” while tracking production and inventories to ensure dependable domestic supplies. The government has emphasized that healthy people do not need to wear masks but photos across Taiwan show people wearing them as a precautionary measure, particularly on public transportation.

The Foreign Ministry announced that it would implement a travel ban on February 7 on all foreign nationals who had been to China within the past two weeks. The ban is not limited to Chinese citizens, but to anyone who has been to China. The Trump administration has implemented a similar ban on foreign nationals and issued a “Level 4: Do Not Travel” advisory advising Americans not to travel to China or to leave the country as soon as possible. The Taiwanese government has issued the same warning against traveling to China as well.

All of these measures show that the Tsai government is working to prevent further spread in Taiwan and prevent a repeat of the 2003 SARS outbreak.

Beyond the government’s policies and some help from friends, such as the United States and Japan, Taiwan has not received much assistance from the international community. Taiwan is not a member of the United Nations, which limits its access to information from UN agencies like WHO and ICAO. Since the election of Tsai Ing-wen as president in 2016, China has increased its pressure campaign against Taiwan. Unhappy with Tsai’s refusal to accept the “1992 Consensus,” Beijing cut off official communication with Taipei. It also expanded this campaign beyond bilateral relations by poaching seven of Taiwan’s diplomatic allies and pushing international organizations like ICAO and WHO to revoke Taipei’s observer status. Even as U.S. support for Taiwan under Donald Trump has increased, Taiwan’s international space has decreased substantially.

Before Tsai Ing-wen took office in 2016, Taiwan was permitted—with China’s approval—to be a guest or observer in these two organizations due to former President Ma Ying-jeou’s friendly policies toward China. Under Tsai, those invitations have ceased, sparking concerns that the WHO will ignore Taiwan the same way that the organization did back in 2003 when it took the WHO two weeks to send officials to Taipei to provide support. As is currently obvious, two weeks during a viral outbreak leads to thousands of more infections and hundreds of additional deaths.

Taiwan’s outgoing vice president, Chen Chien-jen, originally an epidemiologist, led Taiwan’s efforts back in 2003, and now, as he is set to leave his position in May, Chen is seeing another outbreak occur with little help from the WHO. On January 30,Tsai (who was Minister of the Mainland Affairs Council during the SARS outbreak), accompanied by Chen, set out a detailed plan for the government’s response to the coronavirus. Without any help from the WHO, Taiwan has to set its course with whatever information it received from other countries and from the lessons the country learned in 2003.

The WHO has not assisted Taiwan due to pressure from China. Claiming it is abiding by the “One China” principle, the WHO argues that China is providing Taiwan with information and supplies because Taiwan is a part of China. While the United States, Japan, Canada, and countries throughout Europe have called for Taiwan’s inclusion in the WHO, the organization cites United Nations General Assembly Resolution 2758, which reads, “[The UN] decides to restore all its rights to the People’s Republic of China and to recognize the representatives of its Government as the only legitimate representatives of China to the United Nations, and to expel forthwith the representatives of Chiang Kai-shek from the place which they unlawfully occupy at the United Nations and in all the organizations related to it.” This argument might be able to hold water if China actually shared information with Taiwan and shared it quickly, but as President Tsai’s statements have shown, that is not the case: China has ignored requests for the evacuation of Taiwanese citizens, delayed allowing Taiwanese officials from entering China to study the virus, and may not be sharing the “correct” information.

Taiwan is not part of China and China does not provide Taiwan with any assistance. Communication has occurred between the two sides of the Taiwan Strait but Taiwan is excluded from WHO meetings and deliberations. Taiwan’s foreign ministry spokeswoman, Joanne Ou, explained how China really has treated Taiwan, “Internationally, the Chinese government rudely and unreasonably has been pressuring Taiwan and putting political considerations above human health. Disease has no national boundaries. . . . Putting political considerations over people’s health and safety, this, basically, is extremely vile.”

The WHO should understand that Wuhan coronavirus does not care about the “One China” principle and cross-Strait relations.

In late January, the way in which international organizations treated the Taiwan issue reached almost comical levels. ICAO, which oversees aviation policy, began blocking Twitter users who questioned the organization’s exclusion of Taiwan. Many of these users are prominent researchers who study Taiwan. ICAO accused these individuals of spreading misinformation and hate speech and “doing uncool stuff.” It argued that “irrelevant, compromising and offensive material will be removed and the publisher precluded.”

Apparently, the organization cannot see its own hypocrisy in action because ICAO has not learned the lessons of 2003. After all, the United Nations Charter states that one of its purposes is to “to develop friendly relations among nations based on respect for the principle of equal rights and self-determination of peoples, and to take other appropriate measures to strengthen universal peace.”

Making unwarranted accusations about respected voices has actually elevated the conversation by what would normally be a niche group. Ignoring the tweets would have kept the conversation limited, but now, more people are aware of ICAO’s policy of excluding Taiwan than ever before. The same playbook was used after the Houston Rockets General Manager tweeted out support for Hong Kong: overreaction begets greater attention. People who normally would pay attention to China’s actions around the globe woke up and began to understand Beijing’s reach.

ICAO’s behavior on Twitter seems to be doing the same thing. The House Foreign Affairs Committee tweeted out support for Taiwan, “The United Nation's @icao plays a valuable role in ensuring aviation security. But silencing voices that oppose ICAO’s exclusion of Taiwan goes against their stated principles of fairness, inclusion, and transparency.”