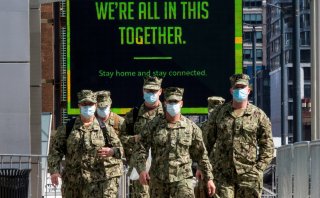 The coronavirus pandemic has or will cost the United States more lives and financial loss than almost two decades of war in Afghanistan and Iraq. Over the past two months alone, more than sixteen thousand Americans have died of the coronavirus, compared to roughly nine thousand service members killed over nineteen years in Afghanistan and Iraq. The cost of those wars has been estimated at roughly $5 trillion, an amount that will pale in comparison to what the virus will ultimately cost the United States. After just a couple of months of disease spread, over $2 trillion has already been appropriated under the CARES Act for emergency economic relief with trillions more injected into the U.S. economy by the Federal Reserve. Over sixteen million Americans became unemployed in just one month, wiping out a decade of job growth. Without a shot fired by an attacking enemy, the United States has been grievously injured.

While the main focus so far has been on closing the barn door stemming from our lack of preparedness for dealing with a major pandemic, there also has been a growing realization that the advantages of globalization may have its limits. Under the flag of free trade and comparative advantage, the United States compromised its national security, allowing its supply chains for medical supplies to become catastrophically dependent upon foreign sources, notably China. It has been reported that perhaps as much as 90 percent of all antibiotics used in the United States are made in China. Solving that problem is obviously a major, immediate priority, but it masks an even deeper shortfall in U.S. strategic thought for which we are now paying dearly. Our country’s military cannot protect us from disease outbreaks coming from abroad, nor can it protect our economy and its most important industries from technology and data theft orchestrated by foreign governments, nor is the U.S. military geared to building modern infrastructure. All these challenges are as vital to our national security as protecting the United States and its allies from military invasion, but they require civilian action, not military action.

Since the end of World War II, preserving national security has primarily been seen as maintaining a robust and capable military under the framework of a diplomatic policy that emphasizes the political containment of authoritarian countries and the promotion of liberal order values. Economic and public health considerations have been traditionally relegated to the backseat with policymakers treating U.S. economic might as a rock-solid given, underpinning our national security posture.

Even before the pandemic hit, that view had begun to be shaken due to a confluence of gathering clouds. As Graham Allison has alluded, in 1950 the United States was the world’s dominant economic power, accounting for 50 percent of its GDP. That number had declined to 25 percent in 1991, and today it is only 14 percent. Back in 1991, China’s economy was one-fifth the size of the United States. Today, in purchasing power parity terms, China has the world’s largest economy, 20 percent bigger than the United States.

Accompanying this relative decline of American economic power, mainly due to rising economic prosperity in other countries, has been the advent of new, nonmilitary threats to U.S. security. The specter of cyberattack has led to a realization that a large military with expensive weapons hardware is no longer enough to protect the homeland. A handful of smart, civilian hackers out for their own twisted fun can potentially cause the United States enormous harm by disrupting our power grids and financial systems—no army is required, just laptops.

The pandemic can be seen as another blow against the more traditional view of American security, showing the vulnerability of the United States and its economy to malign forces that do not wear a military uniform. Nature and microbes can cause the same kind of havoc as World War II bombing campaigns. The coronavirus pandemic is a wake-up call starkly pointing out the dark side of globalization as a threat to national security. In response, protectionism, long a word mistrusted by free traders and academics, should be roaring back into fashion.

Fortunately, the United States already has the tools necessary to deal with these inherently non-military threats. An obscure law, the Defense Production Act of 1950 (DPA), has become a household word today. It provides the federal government with the power to harness American business to provide goods and services deemed essential to national defense, a concept the law broadly defines.

An obvious place to start will be the U.S. pharmaceutical and medical equipment industries which have dangerously outsourced too much of their manufacturing capacity abroad. An initiative between government and the private sector must be urgently started to bring much of this capacity home. If business balks, then the president should be prepared to use his DPA authority, just as he has already done with 3M and GM.

To safeguard overall national security, such initiatives cannot be limited to the health sector. The United States currently finds itself in a contest with China over 5G mobile telecommunications systems. If Chinese 5G wins, the economies of the United States and its allies will be fundamentally compromised, leaving valuable proprietary data accessible to poaching by the Chinese government and businesses all controlled by the Communist Party. Designing a secure 5G system only for the military will not be adequate. In fact, 5G will become the backbone of the American economy permitting the generation of masses and masses of data dramatically boosting productivity. Instead of connecting ten thousand “points” per mile (such as mobile phones), 5G will be the pipeline able to connect up to an incredible three million points per mile. Amazon, Google, Facebook and Microsoft will generate all their data through this pipeline as will virtually every other American business. China cannot be allowed to win the race, gaining surreptitious access to the proprietary data of U.S. business. The administration must work with the American sector to provide a secure 5G system to ensure national security. If necessary, then the DPA will need to be brought to bear to help make that happen.

Another law that should quickly become more familiar is Section 232 of the Trade Expansion Act of 1962. It authorizes the president to impose tariffs to protect domestic industries deemed essential to national security. In the past, Section 232 relief was rarely granted in deference to free-trade ideals and out of reluctance to be too expansive in defining businesses considered vital to U.S. security. Already before the pandemic, the current Administration demonstrated its willingness to use Section 232 more flexibly when it imposed import quotas to help protect the strategic U.S. aluminum industry from lower-priced foreign competition. American businesses involved in sectors critical to American economic strength and competitiveness will need to consider turning to Section 232 if the viability of their U.S. operations are threatened by lower-priced foreign products.

The pandemic crisis is a hard lesson for the United States. The country never dreamed that it could be brought so low by something it believed its government had prepared to handle well and professionally for years. The challenge will be overcome and the U.S. economy will recover. The ultimate lesson is that threats to national security should be viewed very broadly to include more than military challenges. The mortal blow struck against American lives and the economy by the coronavirus is as great as damage from any war. The National Security Council must take the lead in making sure that the entire spectrum of threats to our nation’s security, whether military, economic or health, are met with the full force of the United States.