The Coronavirus Crisis Presents a Unique Challenge for the U.S. Federal System 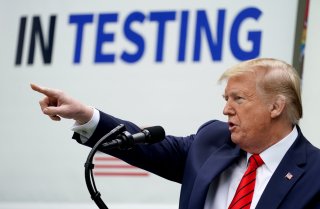 Maryland Gov. Larry Hogan recently bought a half a million coronavirus testing kits from South Korea in the absence of the help he felt needed from Washington. While the Trump administration claims it is supplying states with all necessary support, governors are telling a different story. They say that in a vacuum created by Washington, they have been forced to fend for themselves to do whatever it takes to try to find the equipment and supplies they need to combat the virus.

Meanwhile, for ordinary Americans, the scene looks like one giant mess as the states and federal government engage in histrionics and compete and jockey for medical supplies and resources. In this free-for-all, prices are bid up, accompanied by a crazy quilt of conflicting demands and delivery priorities. The process looks entirely broken—but ironically, for better or worse, the system is working exactly as our Founding Fathers intended.

The United States is dealing with a governance structure, unique to this country. Unlike Paris, London, Berlin, Rome, Seoul or Beijing, the United States cannot respond to the pandemic with a centralized, coordinated response completely controlled by Washington, DC. The U.S. Constitution simply forbids that, granting the national government only certain, enumerated executive, legislative and judicial powers. However vast those powers may be, they are not absolute, and all others are reserved exclusively to the states under Article X of the Constitution. One bedrock principle of constitutional jurisprudence, stretching back at least to the early nineteenth century, is that “police powers” fall within the primary control of state governments. In Gibbons v. Ogden (1824), Supreme Court, Chief Justice John Marshall, characterized those powers as an “immense mass of legislation, which embraces everything within the territory of a State, not surrendered to the federal government,” including “quarantine laws” and “health laws of every description.”

Hence, Trump was on shaky constitutional ground when he asserted—in response to hearing that regional governors were conferring on coordinated guidelines for reopening their economies—that he alone, as “[t]he president of the United States calls the shots,” and that “[t]hey can’t do anything without approval of the president of the United States.” In fact, the governors do have major sway on deciding such issues of pandemic response consistent with their constitutionally based police powers. Founded on the architecture of the document he principally drafted, James Madison might well find it strange that Trump should make such an extreme assertion. Madison might also find it equally strange that state governors would complain that Washington has somehow abdicated its responsibilities in the current situation since the Constitution envisioned that states would handle health concerns under their police powers.

Article II of the Constitution conferred on Congress, however, the vast authority to regulate interstate commerce. Over time, federal legislation has become the overarching body of law controlling the economy including food, drug and health matters, to the extent considered to fall within the ambit of interstate commerce. To protect that federal role, the federal courts have developed the judicial doctrine of preemption, ensuring that constitutionally protected federal laws take precedence over any diverging state laws.

Courts have also traditionally recognized that the president possesses inherent executive authority to act in certain situations, particularly in times of war. One notable example of this kind of executive authority was when President Abraham Lincoln suspended the right of habeus corpus during the civil war based on an act passed by Congress.

The coronavirus crisis presents, however, a unique challenge for the U.S. federal system. Both the federal government and state governments have constitutionally protected roles to play in this situation with no clear structure provided by the Framers as to how such cooperation should operate in practice. Hence, the political sparks have flown as state governors hold press conferences simultaneously complaining about inadequate control and support from the federal government while insisting on their prerogative to handle the crisis in their own states. Meanwhile, the Trump administration has gone back and forth, sometimes asserting that it is mainly up to the states to handle the challenges while at other times insisting that it is the federal government that must call the shots.

In the middle of all this, an obscure piece of federal legislation first passed during the Korean War in 1950, has taken center stage, the Defense Product Act (DPA). This law was passed by Congress principally to authorize the president to marshal the US defense industry to provide equipment and material for the Korean war effort. It has been adapted today to meet a different kind of nonmilitary challenge, but the fit for current circumstances is not as comfortable.

The DPA can empower the president to direct emergency production of medical supplies and set reasonable pricing, but it certainly provides no institutional framework for then allocating such supplies among the states, unlike the Korean War when there was no question but that all resources would go to the armed forces, not to some kind of allocation among fifty states. The DPA also lacks absolute preemptive power over the states. The president cannot outright bar state governors from making their own supply orders as such gubernatorial action falls within their own constitutionally protected, police powers to combat the pandemic. Such modern Supreme Court decisions as United States v. Lopez, and National Federation of Independent Business v. Sebelius, where the Court respectively invalidated federal legislation intruding into state gun control and health matters, show that Congress, under the Commerce Clause, does not necessarily have infinite power over states to dominate how pandemic emergencies should be handled.

Whatever the lessons from the current crisis, the country must deal more effectively with the reality that under constitutional principles of federalism, both state and federal governments have protected roles to play. Washington is going to have to learn to herd the states under the federalism framework crafted by the Founding Fathers.