Coronavirus Has Created Economic Openings for China in Africa 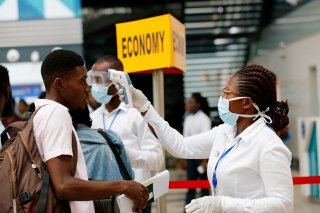 The global north is in lockdown. Europe and the United States are handling thousands of deaths every day. China and India are in lockdown. Iran is in shambles.

Compared to these, Africa seems relatively untouched so far by COVID-19. But the pandemic’s economic effects are still felt. Commodity prices on which governments rely have collapsed, and lockdowns throughout the continent to limit the spread of the virus will likely cause a financial crisis more severe than the one in 2008–2009. Defaults or (more likely) significant renegotiation of government debt will be the theme in Africa for the first few years after we deal with COVID-19. Notably, China is a significant bilateral trade and financing partner for many African countries, holding $145 billion of African government debt, with $8 billion in payments required every year. The Chinese government has shown significant interest in developing African roads, rail lines, and port systems in the past but recently backed off following several setbacks and internal issues with their Belt and Road Initiative (BRI). The United States tends to take a more reactive approach towards policy in Africa and, as a result, has lost significant influence and trade opportunities. If the United States continues to take such an approach in Africa, China may choose to recommit to the continent and take advantage of this crisis to squeeze further concessions and strategic assets from local governments. The optimal approach moving forward for Washington (and for African countries) is broader U.S. engagement and a much greater focus on U.S. investment and lending within the continent.

When Commodities Crash, So Do Economies

On January 23, the Chinese government locked down the city of Wuhan and began putting restrictions in place all around the country. Demand for basic metals plummeted. Copper prices dropped 13 percent between mid-January and early February, while iron ore dropped 18 percent in that same time period. Similar price drops were seen for most other basic extractives. The trouble is that African economies generate the bulk of their foreign currency earnings with commodity sales, and relatedly, governments depend on the royalties generated from such sales for financing. The price collapse has led to immediate and wild forex swings in the most exposed countries. The Zambian kwacha, for instance, has fallen from around 14.5 kwacha per dollar to nearly 19 per dollar. The Zambian government, already under stress due to its hefty U.S. dollar-denominated debts, is attempting to renegotiate its debt deals. Its revenue has collapsed while its expenses have risen dramatically. This same story is repeated all over the continent. All sub-Saharan Africa (SSA) countries that depend on commodity exports are suffering, and many governments will have to renegotiate their debt or risk default.

Collapsing export income puts substantial stress on African banks’ balance sheets. Combine this with the lockdowns and other commercial restrictions and you have a whole lot of people and businesses left unable to pay their debts. Default rates in Africa are already high as a general rule. Uganda’s non-performing loan ratio, for example, is generally around 7 percent. By comparison, at the height of the 2008–2009 financial crisis, the U.S. subprime mortgage default rate was around 6.6 percent. Given the severity of the crisis and ongoing restrictions, we should not be surprised to see the current rate double or even triple. With so many businesses and individuals going bankrupt, it is difficult to see how most banks will stay afloat. To make matters worse for the banks, deposit insurance typically only covers a very small amount. If you have significant savings and your bank goes under, this crisis could wipe you out financially. Bank runs are very likely in this kind of environment, and a collapse of the financial sector collapse seems probable.

Yet despite this grim picture, the post-coronavirus future actually looks pretty bright for outside investment. Demand for most commodities should return pretty quickly. Mines (mostly foreign financed) will reopen, farms will still grow food and cash crops, and stores will sell goods once more. The main determining factor in restarting growth though will be capital availability. SSA is capital starved at the best of times, and after this crisis it looks to be worse. If many banks go under, depositors will lose much trust in the traditional financial sector, leaving the remaining banks with an even more limited ability to raise additional capital. Larger commercial factories, retail, and agricultural operations are extremely likely to suffer due to this shortage. Interest rates will rise rapidly and loans will be harder to get. Because of this, African governments should offer fairly extraordinary concessions to private investors (tax and regulatory exemptions) who are able to bring in a lot of capital.

Chinese involvement in Africa thus far has been largely limited to trade in raw materials and bilateral government debt. Beijing provides billions of dollars in debt for Chinese firms to buy African goods, and many Chinese oil and mining companies have established offices on the continent. This is all fairly routine. However, the BRI is what really drives fears of Chinese influence in Africa. Most BRI deals are fairly generic arrangements: a Chinese government-owned bank provides cash, the recipient builds out roads or rail lines or ports, and later on the recipient pays the bank back. These all include terms about buying Chinese steel and concrete (after all, BRI is best understood as a domestic bailout of Chinese steel manufacturers first and a geopolitical play second) but are otherwise pretty standard deals.

Things can get a bit hairy though when a country is significantly overexposed to China in terms of debt. In 2015, Sri Lanka lost Hambantota Port to China when it was unable to pay its high debts. Kenya is highly likely to lose the Port of Mombasa to China as a result of the country’s debt and some terms of the deal (e.g., the debt can only be serviced with revenue generated by the Mombasa-Nairobi SGR line and any disputes will be resolved in a Chinese court).

China, notably, has recently started pulling back from this debt trap diplomacy due to numerous issues in choosing profitable investments. The biggest beneficiaries of BRI so far have been provincial officials and Chinese state-owned enterprises (SOEs) who don’t have to deal with the diplomatic blowback when these overseas projects go sour. Additionally, with the exception of Pakistan, much-hoped material gains have gone largely unmaterialized. China may have gotten a port in Sri Lanka and will probably get a port in Kenya, but in return has generated much enmity and attained no significant gains in trade. However, COVID-19 and the resulting financial crisis may create an opportunity for China to revitalize BRI in Africa.

Even if China chooses to continue drawing down its BRI program in Africa, it will be an increasingly important trade partner. It also seems likely that Beijing will take advantage of this crisis to negotiate with its African counterparts. If the Chinese government commits to significant investment and lending, many African governments will be ready to grant significant concessions to Chinese SOEs or other firms. These concessions can take the form of debt-for-equity deals in strategic assets (like the Sri Lankan port) or mining, energy, and agricultural transactions. What worries some Western governments is that some of these strategic acquisitions may be dual-use. The People’s Liberation Army Navy already has a naval base in Djibouti, and China takes control of the Port of Mombasa, it might decide to construct a similar military outpost there. There are also some airports that the Chinese government would likely be interested in.

Yet the bulk of Chinese interest will almost certainly be in mining and energy concessions. In terms of mining projects, these could include the Zambian copper belt, South African platinum and palladium mines, aluminum in Mozambique and Guinea, and potentially uranium mines in Congo or Namibia (China already has a uranium mine in Namibia, near Swakopmund). In terms of energy, there are large oil fields in the Albertine graben in Uganda, Turkana in Kenya, South Sudan (China is already active here), and off-shore oil in Mozambique. Chinese firms taking over the management of several of these fields and mines would not be surprising.

Historically the United States has not been too involved in Africa outside of a few West African petrostates. With the advent of shale oil extraction technology in the United States in 2007, America has largely withdrawn from even West Africa. The U.S. government activity is now largely limited to providing security training for select African governments and providing humanitarian aid. This is a massive strategic error, and a missed economic and political opportunity. With rising incomes and rapidly growing populations, African countries will be far more important in twenty years than they are now. Ceding influence and business opportunities in the fastest-growing region on the planet to China in no way benefits the United States. PROSPER Africa and the BUILD Act are the two main tools in Washington’s arsenal to counter Beijing’s influence but are far from sufficient. The United States must work with American industry and African governments to help the latter build up domestic capital and decrease the need to import as much.