Coronavirus Kindness: The Pandemic Has Exposed Every American's Angels and Demons 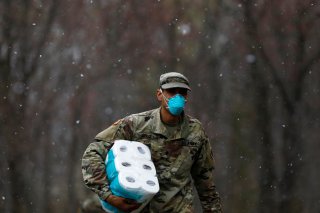 The ways people respond to a crisis tell us volumes about their values: Are they increasingly selfish or giving? In the past, Americans have rushed to help those hit by earthquakes and hurricanes, often stepping in where the governments failed. Will that communitarian spirit remain when people are facing a much more severe crisis?

The 1918 flu pandemic killed approximately 675,000 people in the United States and no less than fifty million people around the world. In Philadelphia during the pandemic, “[f]ear began to break down the community of the city,” according to John M. Barry, author of The Great Influenza: The Epic Story of the Deadliest Plague in History. “Trust broke down. Signs began to surface of not just edginess but anger, not just finger-pointing or protecting one’s own interests but active selfishness in the face of calamity.” Children orphaned by the disease and those whose parents were too sick to care for them were left to fend for themselves, as their neighbors refused to heed the Philadelphia Bureau of Child Hygiene’s supplications to care for these youngsters in need, even on a short-term basis. Barry quotes Elizabeth Martin, a Philadelphia woman involved in social services, as recording that “[n]othing seems to rouse [potential volunteers] now. They have been told that there are families in which every member is ill, in which the children are actually starving because there is no one to give them food. The death rate is so high and they still hold back.”

As the coronavirus pandemic spreads, there have been some news stories about selfish behavior. Some Senators sold stocks after they received an intelligence briefing—and then told the public not to worry. Some judges did not show up at polling places during the recent primaries, though many more did, risking their lives to keep democracy healthy. Two brothers bought out the antibacterial wipes and hand sanitizers of several towns. They sold three hundred bottles of hand sanitizer at a high profit before being blocked by Amazon for price gouging, with 17,700 bottles of their stockpile remaining. The two ended up donating the sanitizers. However, there are many more reports of prosocial and altruistic behavior. College students are joining together to create online forms to help students find housing, funds, meals, or rides home. Communities are using technology to cope with the coronavirus by creating local databases to support seniors. Public school teachers are collaborating on a Google Doc to brainstorm for virtual teaching. Major news outlets are eliminating their paywalls for coronavirus coverage. Famous authors are using social media to inspire their followers to use tools like Venmo and Paypal to donate directly to those facing economic hardships. Musicians are streaming mini-concerts over social media, reaching fans to help them cope with social distancing. Athletes and team owners are pledging to financially support the people who work in the arenas. Basketball stars Giannis Antetokounmpo, Kevin Love, and Blake Griffin have each pledged $100,000 to the people who work in their home arenas, and Antetokounmpo’s team promised to match player donations to its arena staff members who work part-time. The players, coaches, and owners of the Golden State Warriors are together contributing $1 million to support the employees of their home arena.  The fact that there is very wide support for massive government outlays and for blowing up the deficit, usually strongly opposed by Republicans and conservative Democrats, speaks to the spirit of the time.

In The Great Influenza, Barry reports that, as the 1918 flu raged, healthcare professionals were exceptions to the behavior of the public. They “continued to do their duty. […] Doctors died, and others kept working. Nurses died, and others kept working.” In this respect, the response to the coronavirus is similar to that of the 1918 pandemic. Healthcare professionals in the United States know that many of their counterparts in China and Italy have become sick, and the numbers of inflected healthcare professionals are rising here. Two Emergency Room physicians are among those critically ill. Still, most healthcare workers continue to report for duty, even amid shortages of protective gear. As physicians deal with rising concerns for their own wellbeing and that of their families, some are reported to have “placed themselves into makeshift quarantines, sleeping in hotel rooms, garages and basements” to protect their families while continuing to serve their patients. The pandemic in the United States has a long way to go. People who are locked up for months may well behave very differently than those at home for two weeks or so. So far, though, we have by and large seen our better angels. By appreciating these expressions of good fellowship, communal spirit, and professional dedication, we may help them stay the course.

Amitai Etzioni is a University Professor and professor of international affairs at The George Washington University. Click here to watch a recent, four-minute video called “Political and Social Life after Trump.” His latest book, Reclaiming Patriotism, was published by the University of Virginia Press in 2019 and is available for download without charge.