The Coronavirus Threatens Africans and China’s Hold on Africa 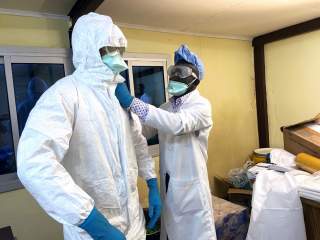 The most terrifying and mysterious question about the Coronavirus is: Why has Africa, home to 1.3 billion people, only reported three cases and no deaths?

Worldwide, coronavirus, also known as Covid-19, has been found in eighty-six thousand people and killed almost three thousand in more than sixty countries. And Africa is usually an incubator of epidemics, not an island of safety from them.

What makes Africa different? The answer reveals some tragic realities about African healthcare, some painful political realities about China’s relationship with its own people and with Africans, and presents an opportunity for the United States.

World Health Organization officials and others are puzzled by Africa’s seeming immunity. Since there is no genetic, climatic or other scientific reason to expect Africans to be safe from the pathogen, it is likely that overworked African hospitals are failing to distinguish between Covid-19 and the flu. They are also likely experiencing breakdowns in record-keeping and a shortage in diagnostic tests, which is artificially reducing Africa’s caseload. In short, Africa’s comparatively poor health-care system is failing to recognize many cases in its midst—setting the stage for a larger tragedy.

Sadly, there are many good reasons to believe that the real number of African victims is a lot higher than the three recorded. First, the numbers themselves are suspicious. Of the three African cases reported, one in Egypt, one in Algeria and one in Nigeria. There is no record of secondary cases—spouses, co-workers or fellow travelers. Usually, incidents of diseases appear in clusters. Second, roughly one million Chinese nationals are believed to permanently reside in Africa. The Chinese New Year, which was celebrated at the end of January while the virus was spreading uncontrollably in China, as well as ample work and family obligations, provide many reasons for Chinese citizens to go home and then return to Africa. In addition, tens of thousands of Africans study in China, returning regularly. Plus, there are many travelers, from more than sixty countries with recorded cases, who transit through Africa. Indeed, the solitary Nigerian case is an Italian executive who arrived in Lagos from Milan on February 24. And few air routes from China to Africa have been cut. “Ethiopian Airlines, the largest African airline, never suspended its flights to China since the epidemic began, and China Southern on Wednesday resumed its flights to Kenya,” France 24 reported. Taken together, the extensive trade and travel between China and Africa, suggests that these numbers should be far higher.

This crisis also spotlights China’s weaknesses. Chinese officials are perfectly aware that the 1911 revolution, which ended centuries of Qing dynasty rule, began in Wuhan—and fear a political contagion as much as a viral one. China’s persecution of Wuhan doctors for sharing information with their colleagues in early December is one sign of political brittleness. Another is the “gag order” that China’s Center for Disease Control imposed on January 3. Nor has Beijing’s cooperation with international health organizations inspired trust. Controlling information is not the best way to combat emerging epidemics; crowdsourcing data is.

Nor have China’s quarantines inspired trust. Once the Chinese traced the outbreak to a live-animal market in Wuhan, its officials closed it on January 1. Yet the floor above the animal market, which sold eyeglasses, stayed open until January 6, the South China Morning Post reported. It was closed only after an outbreak of 820 infections, the highest outside of Wuhan at the time, was discovered in the distant coastal city of Wenzhou, known for making and moving eyeglasses. Even China’s quarantine of Hubei province, roughly the size of France, came after many had left for the Chinese New Year, a holiday similar to Thanksgiving in its domestic travel implications.

China’s battle against Covid-19 has undermined its brand of authoritarian competence. That China begs the world for surgical masks is a pathetic coda.

Now, in African capitals, questions about China are multiplying. Is it being honest with its African trading partners? Do its pledges of healthcare help mean anything?

Covid-19 could disrupt many of China’s trade and investment relationships across Africa. (China itself is expected to suffer a $62 billion loss in GDP. Africa’s looming losses have been estimated.) China’s investments, engineering expertise and training programs drive the productivity of much of Africa. Quarantine measures and trade disruptions virtually guarantee that China’s participation in Africa’s economic growth will slow or even stop. This will inevitably lead Africans to seek new relationships with the United States and the European Union.

Thus, an opportunity for America to help Africa and itself emerges. The United States has long invested in building African health-care facilities, most notably President George W. Bush’s multi-billion-dollar effort to fight AIDS there. Most importantly, the United States has spent $900 million standing up medical-testing facilities in forty African countries. These testing labs could now be used to detect and defeat Covid-19.

President Donald Trump should stand alongside African leaders in a partnership that shares expertise, data and dollars. This would be an effective contrast from the hegemonic Chinese, who too often refuse to allow their doctors to speak freely or their health agencies to share facts. Africans will certainly notice the difference.