Corruption in Iraq: Where Did All the Money Go? 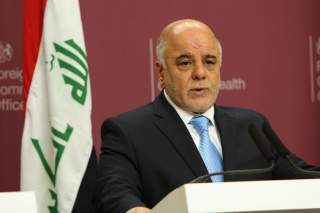 Once again, the subject of illicit financial flows from kleptocratic regimes is in the international spotlight, this time in the form of the “Panama Papers.”

What is surprising is the level of shock at something that should have been obvious. For a long time, many financial institutions turned a blind eye to nefarious PEPs (politically exposed persons) and not just in Switzerland, as we see now with big names such as HSBC, once again deflecting allegations.

The industrialized world can’t afford any more surprises like this, otherwise aid and loans will continue to enter weak states, only to be rapidly snuck out.

Encouragingly, there are signs that governments and regulators are being energized by the Panama Papers. The U.S. Treasury will soon announce a requirement that banks disclose the owners of shell companies, and in the UK regulators set a deadline for banks to disclose details of clients’ relations with Mossack Fonseca, the company at the centre of the current storm.

Iraq, with lamentably high corruption, can be a litmus test for revived effort. Iraq also desperately needs to recover stolen assets, because it is running out of money for both fighting ISIS and rebuilding Iraq, in order to prevent ISIS 2.0.

Luckily, the United States is leading the way with the formation of the Kleptocracy Asset Recovery Initiative (KARI), but far more global coordination is needed. In Iraq, financial assistance should be put into ministries to train people in spotting and preventing corruption.

There are certainly good young people who want change in the Iraqi government, the challenge is creating a culture where they can speak out. That will take a renewed and internationally coordinated capacity building effort. As an example, the Higher Council of Education Development, an Iraqi organization that has sent four thousand students overseas to help ministerial capacity, had a budget of just over $100 million last year. The international community must urgently help Iraq to resource such work, because so far war expenditures dwarf other efforts.

Asset recovery and civil service capacity building are far smarter than traditional forms of aid. The United States has already tried a $60 billion reconstruction effort in Iraq, for everything from schools to prisons. Around $700 billion of Iraqi oil revenue has not achieved much more, all because of corruption and mismanagement.

Alas, this is a familiar story for Iraqis, who live in a country ranked 171 in the Corruption Perception Index. Corruption in Iraq is tied to chronically weak accounting and murky governance. Estimates of how much goes missing vary from $100 billion lost since 2003 to $20 billion in 2013 alone. One Iraqi government official put total money lost to corruption as high as $300 billion. This is fifteen times the amount Iraq now seeks to borrow.

As Iraq’s currency reserves rapidly drain and state salaries run out, the ultimate effect could be giving the so-called Islamic State vital breathing space, as the Iraqi state loses the means to function.

Last year the late Ahmed Chalabi found that nearly thirty companies were making off with almost $4 billion, through forging invoices and taking funds from the Central Bank of Iraq. What could be more lamentable than phantom projects funded by fake invoices made to the central bank? Currency auctions must stop, because they are killing Iraq.

Disturbingly, it has even been reported that not just one but multiple ministries have been involved in carefully organizing “phantom projects” and have turned government purchasing into a racket. Overly generous subsidies in fuel and food, to the tune of at least $20 billion a year, have created vast black-market opportunities. Those in government get the first opportunities to be enriched.

Not that they need to get rich in the first place, because just having the job is enough. Last year, MPs’ salaries were $11,000 per month, twenty times the average Iraqi salary (not counting benefits and allowances of over $15,000 per month). In the United States, the equivalent would be a congressman earning over $1 million a year. This is the culture that Prime Minister Haider al-Abadi is now trying to tackle.

Dangerously, public anger has reached a fever pitch due to a salary crunch hitting Iraq’s bloated public sector. At the start of this year, the Iraqi government was spending over $3 billion on wages, but only around $2.5 billion was coming in oil revenues; for over a year now, workers at ministries have seen salaries delayed, while some plants have been closing down.

The death of industry is inevitable, as ministries are often politicized hiring schemes, giving out jobs for votes in Iraq’s dysfunctional muhasasa or “quota” system.

Now, some Iraqi leaders might finally be starting to wake up. Moqtada al-Sadr, sensing public outrage, has called for mass demonstrations, but tellingly also detained one of his most prominent party members, Bahaa al-Araji. By chance or by design, protestors of the erratic cleric Sadr have now stormed Iraq’s parliament, although at the time of writing most of the demonstrators appear peaceful.

Araji owns a number of large properties in Baghdad, wealth far beyond his salary as an MP. He has tried to explain this as being through “the blessing of God.” His arrest, as well as a few other high-profile cases, shows an attempt to lead by example. But in the past, prosecutors have complained of a culture of intimidation.

This is where initiatives like KARI could be vital. But these efforts need more teeth, both within Iraq and outside. Within Iraq, it is time for far more severe punishment for corruption, and here Baghdad can take a lesson from countries such as South Korea, which now imposes fines on corrupt officials—six times the value of money taken.

Weakened institutions such as the Integrity Commission should be bolstered by an organization outside of Iraq, linked to embassies and in coordination with foreign anticorruption bodies. The role of this Iraqi entity would be to identify corruptly obtained assets, such as large properties that would have been impossible to buy on an Iraqi politician’s salary, and to take tip-offs about secret assets.

Sharing information with organizations such as the World Bank’s Stolen Asset Recovery Initiative, Iraqi officials can then start to develop a broader picture of where assets are hidden.

As a member of the United Nations Convention Against Corruption, Iraq can then insist on mutual legal assistance requests. The process is long, and to date there has been difficulty in recovering significant stolen assets, even from notorious kleptocrats such as Tunisia’s Zine el-Abidine Ben Ali (only $29 million has been recovered of an estimated $3 billion.)

But the Philippines shows that it can be done, having recovered around 25 percent of the funds plundered by the Marcos regime. A similar success rate for Iraq would represent a phenomenal amount of money, perhaps through pursuing assets through “in rem” legal means. Iraq has successfully used this principle in the courts (holding a court case against an asset, rather than a person) in the case of stopping a shipment of Kurdish oil.

In the case of stolen assets, the aim of a similar effort would be to create a chilling effect on the culture of corruption, where no corrupt official (or their proxy network) is free from public shame. To reiterate, Iraq cannot do this alone. In the wake of the Panama Papers, White House press secretary Josh Earnest was asked about the documents and noted that “the United States continues to be a leading advocate for increased transparency in the international financial system.”

Now, more than ever, is the time to support those words with tougher action. For the country on the front line against the so-called Islamic State, it could be the best kind of support.