Could America Capitalize on a Trade Deal with Switzerland 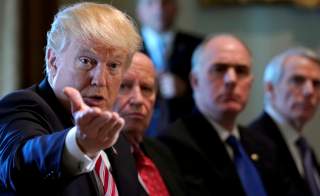 If anyone needed a reminder of the decay of the old Washington think tanks and the laziness of free traders who criticize President Donald Trump’s efforts to establish truly free and fair trade, they need look no farther than the effort to save a would-be trade deal between the United States and Britain.

The idea emerged when British voters decided in 2016 to exit the European Union (EU) and restore their parliament’s full control of Britain’s sovereignty, including on matters of trade policy. Despite skepticism of past trade deals, President Donald Trump indicated shortly after his election that Britain would receive priority consideration for a deal as London presumably charted an economic path less focused on Europe.

But the concept has lost momentum. Theresa May, the prime minister of Britain who opposed Brexit in the first place, has tried to comply only minimally with the directive from voters and preserve as much of a relationship with Brussels as possible.

Notably, May’s government has sided recently with the EU on its trade disputes with the United States. More damningly, May has taken the same position as the French and German governments and senior EU bureaucrats in not only opposing, but attempting to undermine the U.S.-led effort to increase sanctions on Iran for its nuclear program and export of jihadism. May has even urged UK companies not to comply with U.S. financial sanctions on Iran—an extraordinary break with Washington that should call into question whether the “special relationship” between the U.S. and UK still exists.

Put simply, Britain’s current government doesn’t want or deserve a trade deal with America—at least not until Brexit is complete and May is ushered out of the top job by her own party or voters.

But that hasn’t stopped a collection of old think tanks including Heritage, CATO, and others from joining with British supporters of a quick deal. One of those voices ballyhooing the idea, Dan Hannan, a former member of the European Parliament, actually referred to the grouping and its stale ideas as “heroic.” So much for British understatement.

The group has consistently wailed about how Trump has undermined what they call free trade, even though Trump is the only major leader calling for genuine free trade. He even proposed at the G7 summit last June to eliminate all tariffs and barriers—an offer that was met with thunderous silence by those present, many of whom apparently depend on crony trade arrangements.

A better idea than a deal with the floundering May government would be for Washington to seek a trade arrangement with Switzerland in order to embarrass and pressure the EU, and establish a baseline model for new bilateral agreement.

For reasons that look more self-evident by the day, Switzerland has remained independent of the EU, the euro currency, and other entanglements that would diminish its sovereignty. That means the United States and Switzerland can cut a bilateral trade deal, which is difficult to do with most other European nations still wedded for the time being to EU membership.

The biggest political benefit would be to shame the EU, which despite promises to reach a fair trade agreement with Washington, is dragging its feet. European trade officials are now signaling that a new deal that was once to be concluded rapidly this fall is now somewhere on the distant horizon in spring—another attempt to burn time in the hope that America loses its political nerve.

The upside for the United States in a deal with Switzerland is that the Swiss can afford our goods and will respect our intellectual property. The current U.S. trade deficit in goods with Switzerland can be brought down if the Swiss lower protective barriers on their agriculture—a politically difficult step that is nonetheless the topic of serious if muted discussion in Switzerland. An agreement could be great for American farmers.

We already have a surplus in the trade of services with Switzerland. In 2016, we exported $33 billion in services to the country, and imported $24 billion. We can press our advantage in this realm.

Switzerland’s competitive healthcare market and patent protections also make it an attractive and workable partner for the United States. Governments of Old Europe, like France and Germany, don’t just freeload on America through NATO, for which most European governments contribute far too little. Many governments apply price controls to pharmaceuticals. In effect, sick Americans subsidize the price of drug research while Europeans pay less. A key innovation of the new U.S.-Mexico trade deal is an agreement to protect the patents on U.S. biologic drugs for at least ten years. This standard or an even better one is more feasible with Switzerland than with the EU.

It makes sense to prioritize a trade deal with Switzerland, especially over one with Britain and amid foot-dragging by the EU. A properly crafted deal would be good for us, especially in agriculture, and put the EU and its bureaucrats under more pressure.