Could China's Banks Take Down the Global Economy? 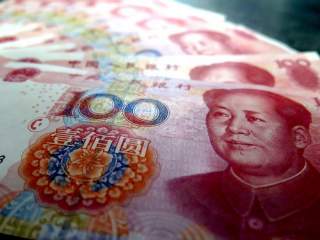 In the wake of the global market reaction to the UK’s vote to leave the European Union, investors have redoubled their focus on China’s economy and particularly the banking system. “Brexit is the noise, but China is the story,” one senior investment banker commented last week, referring to the fact that the level of demand from China’s economy remains a major concern. We looked at the political situation in China in a previous post for the National Interest.

Following the UK’s vote on Brexit, the International Monetary Fund issued an extraordinary statement, saying that among the globally systemically important banks, Germany’s Deutsche Bank is the leading contributor to global systemic risk, followed by HSBC in the UK and Credit Suisse. Investors fear that China’s banks pose similar risks to the world economy, one reason why the international financial media are constantly speculating about possible financial contagion originating from China.

And yet such fears are largely unfounded. The first thing for investors to consider when we think about Chinese banks and the broader Chinese economy is that most companies and financial institutions are arms of the state. Although the Chinese government does tolerate a certain degree of speculative activity along the periphery of the economy, including areas such as real estate development and nonbank financial companies, the most important commercial and financial institutions are all tightly controlled by the government, which in turn is under the power of the Chinese Communist Party (CCP).

While many Western countries try to enforce some degree of separation between politics and commerce, in China there is no such division. “In the west we have a division between church and state,” notes one long-time observer of China at a major Wall Street investment bank. “In China there is only the state.” Thus when western observers warn of a “time bomb” in China’s banking system, they are starting from a false premise that there are any Western-style “banks” operating in the country at all. This is not to suggest that real estate companies and other ostensibly “private” firms cannot fail, but banks are a different matter.

But the larger issue is that Chinese banks habitually make bad loans, especially to state-run enterprises, Party members and their families. These loans are rarely repaid and, in fact, have fueled a steady stream of capital flight that is visible in the huge inflows of cash from China into the U.S. real estate market. David Curtis Wright, in his 2007 book The History of China, notes that “the tentacles of corruption invade most sectors of the Chinese economy, but in the financial sector it is especially serious.”

The South China Morning Post reports that wasting public money on extravagant meals and overseas travel, taking bribes for handing out loans, and illegally pocketing off-the-book gains were some of the ways corruption had spread in the financial industry. China’s top anti-graft agency reported these and other instances of official corruption by CCP officials following a two-month review of the sector. In December the head of China’s fourth-largest state bank, Zhang Yun, stepped down citing “personal reasons.” Last October, Zhang was demoted from his party rank and placed under two years’ probation after being probed by the Central Commission for Discipline Inspection, the feared group used by President Xi Jinping to restore “party discipline.”

To declare that Chinese banks and companies have a problem with bad debt, corruption and weak governance is to state the obvious. Western observers should not think of advances from Chinese banks as “loans” but instead as allocations of liquidity from the communist state. Since the government views loans from state-controlled banks as a form of public pending, the fact that these loans frequently are not repaid is also hardly surprising. Indeed, what would be quite shocking would be if the loan proceeds were returned! In reality, the only issue is whether Party officials are excessively greedy in converting public funds to their personal use. This is why a large number of senior executives (and Party members) of Chinese banks have been jailed for corruption.

So given the level of corruption in China and the fact that the CCP exercises complete near-total control over the nation’s financial system, how should investors think about possible contagion risk emanating from China’s banking system?

In terms of possible external shocks coming from the failure of a Chinese bank, the first thing for western observers to appreciate is that China’s financial system remains largely insulated from Western capital markets. Movements in currencies and equity market valuations are certainly a concern in terms of Western perceptions, but less so for the reality on the ground. Market moves have internal significance more for the financial position of the Chinese state and how that influences public perception of the CCP than for the solvency of a specific Chinese bank or company. If movements in the currency markets, for example, were to cause a large loss to a Chinese bank, the decision to support the institution with new government “loans” would be a political rather than financial consideration.

The more interesting question regarding risk to foreign markets from China’s economy comes from efforts by the government of paramount leader Xi Jinping to inject “risk” into the system, this in an effort to weed out the most troublesome money-losing state companies and banks. As we noted in the previous article for TNI, part of the political campaign against “corruption” in China—what Xi refers to as “tigers and flies”—is about preparing to restructure inefficient parts of the economy. When Chinese officials discuss “inefficient” state companies, however, they are really referring to instances of ostentatious and excessive corruption by CCP officials, behavior that can lead to popular discontent and social turmoil.

Western financial institutions such as Lehman Brothers and Citigroup in 2008, or even large Western banks today, were and are vulnerable to changes in market perception, which in turn can translate into a loss of liquidity. In China, by comparison, the leaders of state-controlled banks and state companies are the ones at risk. If the Beijing government makes the political decision to allow a state-run bank or company to fail, this judgement will reflect a deliberate choice to cut off official support.

Foreign investors and media will naturally react to such developments with alarm and surprise, but the fact remains that, for now, the Chinese state led by the CCP remains entirely in charge. On the day that the Party loses the ability to maintain political control in China, then the systemic-risk implications of financially troublesome Chinese banks will be the least of our problems. For Xi and other officials, the common fear that haunts their dreams is political instability.