Could the Coronavirus Cost Donald Trump the Presidency? 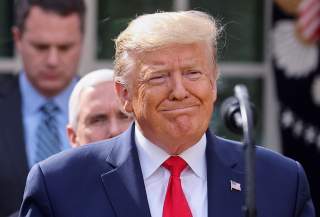 President Trump declared a national emergency over the rapidly spreading coronavirus. It is also an emergency for his reelection campaign.

Despite his polarizing nature, or perhaps because of it, Trump entered 2020 surprisingly well-positioned for a second term. Impeachment not only failed to remove him from office but left him with some of the highest job approval ratings of his presidency. Hovering just below 50 percent, Trump was within striking distance.

The Democrats' massive presidential field turned out to be an equally large bust. In the end, they were left with two nearly 80-year-old white men. One was a socialist who had recently had a heart attack, the other a clearly past his prime Joe Biden -- "Sleepy Joe" versus "Crazy Bernie" as Trump put it.

Coronavirus threatens all of that. Trump repeatedly downplayed the pandemic, seeking to assuage public concerns and keep the economy humming along. While defensible using the same logic as exhorting the American people to "go shopping" in the aftermath of 9/11, it made Trump look more interested in his reelection than public health. It also did not reflect well on his judgment when the virus did continue to spread.

The strongest argument for Trump's reelection for swing voters is the economy: historically low unemployment, respectable growth, a booming stock market, rising wages for workers on the lower end of the scale. People can tolerate the tweeting as long as their 401ks are performing well. Coronavirus puts all that at risk.

An effective response to an emergency of this scope requires a level of national unity Trump has seldom aspired to, much less ever achieved. Trump is a nationalist, but his approach to politics has generally to put his electorate against the Democratic coalition.

There is also not much Trump can say in national addresses that will compete with conferences being canceled and major sports leagues suspending their seasons. In fact, the absence of sports from television will give viewers little to distract themselves from coronavirus news or even their own illnesses.

But the biggest problem for Trump is coronavirus reinforces the appeal of having a normal president, which Biden pledges to be, and the concerns about trusting a bomb-thrower to deal with a major crisis. Voters amused by Trump's rallies and tweets may think twice about whether that is what they really want in a president.

Coronavirus makes it easier for Biden to turn the election into a referendum on Trump, which the former vice president should win, rather than a left-right binary choice, which Biden could well lose.

This could all be premature. The crisis may have passed by November. Trump looked doomed by the "Access Hollywood" tape, which broke in October, but still managed to recover in time for when voting started. The election is still a lifetime away. It is also possible Trump will find a convincing way to cast doubt on Sleepy Joe's ability to manage a crisis while reiterating his support for greater economic independence from China.

But if we are still practicing "social distancing" come the fall, Trump's reelection will itself look like a distant goal.

W. James Antle III is author of Devouring Freedom: Can Big Government Ever Be Stopped?

Image: U.S. President Donald Trump arrives prior to declaring the coronavirus pandemic a national emergency during a news conference in the Rose Garden of the White House in Washington, U.S., March 13, 2020. REUTERS/Jonathan Ernst.