Could the Coronavirus Start a War Between Taiwan and China? 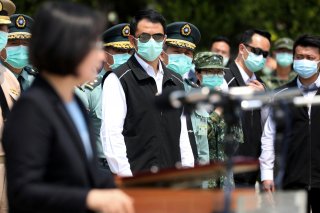 Already chilly cross-strait ties have worsened with the coronavirus outbreak as mistrust across strait has led to acrimony in the handling of the crisis. With Taipei and Beijing unable to agree on evacuation procedures, several hundred Taiwanese are still stranded in China's Wuhan, the city at the epicenter.

As a consequence of the onset of the coronavirus crisis and the pervasive disruptions it has caused, the tensions across the Taiwan Strait have been rising since. The current epidemic of deadly virus outbreaks not only thwarts fights against coronavirus but also brewing catastrophic storms across the Taiwan Strait. Will the coronavirus outbreak present an opportunity for growing rapprochement between Beijing and Taipei or otherwise be a confrontation?

Now the coronavirus tensions are dragging Beijing and Taipei towards conflict, and the disagreement over the repatriation of Taiwanese from the epicentral of a deadly coronavirus outbreak is piling pressure on already strained relations across the Taiwan Strait. Analysts said that failure to resolve such disputes could turn stalemate into a confrontation.

Meanwhile, the Taiwan Allies International Protection and Enhancement Initiative Act (TAIPEI Act) is expected to be reviewed by the U.S. House of Representatives on March 5 as more American lawmakers voice their support for Taiwan's recognition as a sovereign state. The tensions escalate in strait foreshadow the possible turbulence and tension between the two sides and may lead to the outbreak of military conflict across the strait. But the most disturbing scenario has emerged, the outbreak of coronavirus, the impact of cross-strait relations caused by the coronavirus epidemic has emerged, the situation in the Taiwan Strait surging the possibility needs to be squared.

The United States and China are also escalating their military duel near Taiwan by flying strategic bombers near the island. The PLA sent several H-6 bombers near Taiwan in early February, including one that provocatively crossed the middle dividing line, prompting Taipei’s military to scramble F-16 jets to intercept and shadow the bomber, Taiwan appears to be the exception in a region of rising tensions.

The implications of China’s military modernization are profound. “Conservatives have also long warned that China’s ambitions go well beyond simply taking over Taiwan,” Rick Fisher, a China military analyst, said. “What China will try to do to Taiwan is simply the template for how it will eventually threaten every other democracy.”

The challenge posed by Chinese military expansion requires a Cold War-type response, as it's one of the most ambitious military modernization efforts in recent history. China’s buildup of missiles, warships, aircraft, space weaponry and cyber capabilities has accelerated under President Xi Jinping. The decades-long military buildup now poses a threat to Taiwan security not just in Indo-Pacific but also around the globe, and the great consequence of China's invasion could emerge at this flashpoint.

Recently, China has been hiking tensions to distract from the coronavirus crisis. However, the two sides of the Strait each must take one step of concession, erecting mutual trust, and the U.S. attitude, even granted all could be satisfied, thus restarting consultations, may still not be able to ensure the completion of a new agreement. Nevertheless, cross-Strait relations are the most important challenge and opportunity for Taiwan's survival.

China has a stockpile of nearly two thousand ballistic missiles and more than 750 fighters opposite Taiwan. The Chinese military is continuously flexing its muscles in response to the third appearance by U.S. military forces in the area in a week. And the acrimonious bilateral relations also took on a worrisome military dimension. If the storm in the Taiwan Strait does brew, it will undoubtedly be painful.

At a time when China should be containing a deadly coronavirus outbreak, however, PLA bombers and accompanying aircraft briefly crossed over a “median line” in the strait. Taiwan has scrambled fighter jets after China has ramped up the number of fighter and warship crossings near Taiwan or through the strait, prompting both the U.S. House of Representatives and Washington’s de facto embassy in Taiwan to raise concerns.

Will this be an opportunity for cross-strait rapprochement or otherwise be hostility? Beijing and Taipei could both extend olive branches in the name of a public health emergency that would otherwise be politically infeasible. Only with the wisdom and courage across the Strait and the proper attention from Washington, even during a hectic busyness epidemic wartime, the crisis across the Taiwan Strait can be prevented and the peaceful cross-Strait interaction can continue.