Could a Democratic China Supplant America’s Role in the World? 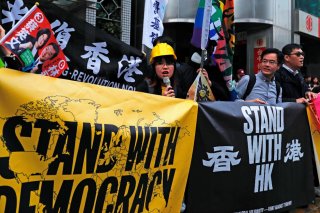 Most observers see the rule of President Xi Jinping and the Chinese Communist Party (CCP) as firmly entrenched in Beijing, and that the rise of China under their control is the foremost security challenge faced by the United States and its allies. In mid-2021, though, former British diplomat and World Banker Roger Garside published a book, China Coup: The Great Leap to Freedom, predicting that Xi’s rivals in the CCP would oust him and undertake China’s democratic transformation. Furthermore, he envisaged that this is something that could occur imminently.

This prediction seems highly unrealistic. Indeed, James Mann of the Johns Hopkins School of Advanced International Studies wrote that Garside’s China Coup “stands out as a pipe dream of mind-boggling implausibility.” A harsh assessment, but probably an accurate one.

Still, I can’t help but wonder: What if Garside is right and China does undergo a surprising democratic transformation? This has happened, after all, in numerous countries already. So, democratization happening in China cannot be ruled out. Even if democratization in China is a low probability event, the high impact that its occurrence would have makes it worth thinking about.

A democratic transformation would obviously have a profound and hopefully positive impact on China itself and international relations more broadly. But the impact of a democratic transformation would also have significant influence on America’s role in international relations—some of which might not be so welcome in Washington. It is what this impact might be that I will focus on here.

Since its entry into World War II, the U.S. role in the world has been based on its being the most powerful democracy and its willingness to defend less powerful states—both democracies and autocracies—against powerful dictatorships. During World War II, the dictatorships the United States worked to protect itself and others against were Nazi Germany and Imperial Japan, and during the Cold War, it was the Soviet Union. In the post-Cold War era, powerful dictatorships the United States has sought to defend various allies against have included Saddam Hussein’s Iraq, the Islamic Republic of Iran, Vladimir Putin’s Russia, and Communist China. Indeed, since the rise of Xi, China has been identified by the U.S. government as the greatest threat to America and its allies—especially those in China’s immediate vicinity. Further, this desire for America’s protection against these adversaries has resulted in many other countries being willing to ally with the United States as well as to defer to it on many policy issues.

However, if China underwent a democratic transformation and behaved peaceably toward other democracies, those of America’s allies that most fear Communist China may not feel nearly as threatened—or place the same degree of importance as they do now on their alliances with the United States. This does not mean that China’s Asian neighbors—especially South Korea and Japan, who are still fearful of North Korea—would seek to end their alliances with Washington. But they would also turn toward a democratic China for help in changing North Korean behavior and perhaps even bringing about the peaceful reunification of the Korean Peninsula. Similarly, a democratic China that reassured Taiwan that its people should decide whether to reunite with China or declare independence from it would result in Taiwan being less in need of U.S. security assistance. Other states in the Asia Pacific region such as India, various Southeast Asian countries, Australia, and New Zealand, which all partner with the United States to varying degrees against Communist China, may also find less need to do so vis-à-vis democratic China.

Of course, U.S. allies in Europe that fear Russia and in the Middle East that fear Iran would still cling to their alliances with the United States against these adversaries. A democratic transformation in China, though, could set the stage for a democratic transition in Russia. At the very least, Putin could no longer count on a Beijing at odds with Washington to support him in his actions against Ukraine and other neighboring states. While retaining the NATO alliance, European states might increasingly turn to China for help in moderating Russian behavior. Similarly, if a democratic China continued to avoid choosing sides between Iran and its regional adversaries, America’s European and Asian allies, who were never enthusiastic about the ever-expanding U.S. sanctions regime against Tehran, might decide to follow China’s lead.

In short, an economically rising, democratic China might increasingly displace the United States as the world’s leading democracy, much like the United States replaced the United Kingdom in this role during and after World War II. This trend would only accelerate if anti-democratic, right-wing forces grow stronger in the United States, and America is no longer seen as the bastion of democracy that it once was.

At present, authoritarian China poses a growing security challenge to the United States and world order. The democratic China that Roger Garside sees as coming soon, though, may pose less of a threat to world order but more of a challenge to the role the United States plays in it. The role that America currently plays in the world depends not just on it being a powerful democracy, but there being threats from dictatorships that other states want the United States to protect them from. Without such a threat from China, some current U.S. allies may become less willing to follow Washington’s lead—especially if the United States pursues policies that its allies find objectionable but tolerate to sustain U.S. protection against Beijing. Yet as long as Xi remains in firm control in China, of course, Washington will not have to face this challenge.

Mark N. Katz is a professor of government and politics at George Mason University, and a non-resident senior fellow at the Atlantic Council.