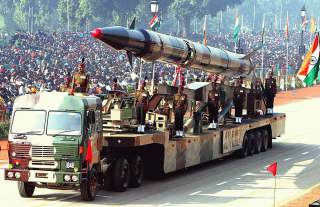 Debate on the review of India’s nuclear doctrine heated up recently after Defense Minister Manohar Parrikar’s "personal" remarks on the no-first-use element of the doctrine. Parrikar’s statement provoked responses from former Indian government officials, politicians, domestic experts and international observers, which delved into another critical element of the doctrine – massive retaliation. Disagreements on whether massive retaliation serves the stated purpose of nuclear deterrence do not take into consideration the changing political scenarios which should ideally influence New Delhi’s nuclear weapons policy. Recalibration of roots, rationale and relevance of massive retaliation, with consideration of recent developments in the India-Pakistan nuclear dynamic, leads to the conclusion that massive retaliation fails to serve the stated objective of nuclear deterrence. If massive retaliation is retained in the nuclear doctrine, it will be due to the lack of a better alternative, not because of its efficacy as a strategy of deterrence.

Massive retaliation in nuclear doctrine can be defined as a strategy which conveys to an adversary that the costs of pursuing an objective are much more than the possible gains the adversary could acquire. What differentiates “massive” from proportionate or flexible retaliation is that the former definitively suggests the threat of nuclear weapons on large population and industrial centers. Massive retaliation was first introduced by John F. Dulles in 1954 while he was serving as Secretary of State under the Eisenhower Administration. Secretary Dulles, however, had to reformulate massive retaliation several times due to the sharp criticism it received. In 1961, the U.S. government formally renounced massive retaliation as its nuclear strategy.

Both the United States and India introduced massive retaliation as a means of avoiding an expensive expansion of nuclear (or conventional) arsenals to match their adversaries’ conventional and nuclear capabilities. The differences between the U.S. and Indian doctrine, however, are stark. U.S. officials openly acknowledged their view that nuclear weapons are tools of war that could and should be used to preserve national interests. Thus, even during the Eisenhower Administration, when massive retaliation was introduced as an official nuclear strategy, there was open acknowledgment not only of massive retaliation, but also that the United States would consider other options along the nuclear escalatory ladder, allowing the retaliation to be flexible.

From this perspective, massive retaliation is arguably more compatible with India’s traditional understanding of the utility of nuclear weapons. India has never acknowledged nuclear weapons as tools of war and has always identified them as political tools whose sole objective is to deter adversaries from using nuclear weapons first. This understanding reflects why New Delhi does not consider the prospect of limited nuclear exchange or of controlling the escalation of a nuclear conflict. Consequently, India skips other choices along the nuclear escalatory ladder and threatens massive nuclear retaliation against large population and industrial centers in response even to an adversary’s tactical use of a nuclear weapon. This understanding has been used by the proponents of massive retaliation both within and outside the Indian government as a justification for this strategy.

There are certain advantages for India to retain the strategy of massive retaliation. Bypassing requirements for options along the nuclear escalatory ladder from tactical to strategic is economical. Considering the recent shift in Pakistan’s principle from credible minimum deterrence to full spectrum deterrence, continuing adherence to massive retaliation for India also signifies New Delhi’s determination to not let Rawalpindi dictate its nuclear weapons policy. That flexible response requires elaborate command and control, with partial pre-delegation of launch authority, further strengthens the argument for retention of massive retaliation. It is also compatible with India’s power structure, in which the civilian government retains complete control over military policies and actions. The strategy of massive retaliation gels well with the broader Indian principle guiding nuclear weapons policy – credible minimum deterrence (CMD) – as it does not require any substantial quantitative expansion of India’s nuclear arsenal. At a time when India is trying to seal its integration with the global non-proliferation architecture, especially in the nuclear realm, shifting away from massive retaliation to, say, proportionate response, followed by a requisite expansion of the nuclear arsenal, could be counterproductive.

Aforementioned factors also corroborate the argument that massive retaliation is just a peacetime threat which is unlikely to hold once nuclear deterrence has failed. That India’s publicly declared nuclear doctrine, including massive retaliation strategy, will be invalid and that its posture will be different once nuclear deterrence has failed has been noted by both policymakers and strategic experts in New Delhi. For instance, in an interview to the Hindu given in 1999, then Foreign Minister of India Jaswant Singh admitted that India would have a different nuclear posture during wartime. Similarly, Indian strategic expert Gurmeet Kanwal argues that “if deterrence breaks down, publicly declared doctrine becomes irrelevant and goes out of the window.”

Arka Biswas is an Associate Fellow at the Observer Research Foundation and is currently working at the Strategic Studies Programme. He has been a Visiting Fellow at the Stimson Center. His work has appeared in the Bulletin of the Atomic Scientists, Foreign Policy, The Diplomat, The National Interest, and the Lowy Interpreter among others.