Could Mattis Be Out by Year's End? 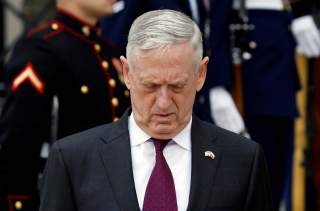 Is James Mattis, secretary of defense, the deputy president of the Trump administration?

Other operators have occupied this ex-officio role in this still-young administration: Steve Bannon in the early days, John Kelly at the height of his power. The former was ousted and the latter is, of course, now much diminished.

It’s a contradictory role: maximum influence, the most curtailed half-life.

Mattis’ role as defense secretary adds a different flavor—and a further layer of power—to the arrangement.

After what some defense officials describe as Barack Obama’s imperial White House—civilian micromanagement of military decisions—President Donald Trump has devolved substantial powers back to the Pentagon.

Add to that Mattis’ sprawling alliance structure on the Hill—he’s the one of the last “adults” in the room, the narrative for many goes—and on war and peace he is peerless.

But as with Bannon and Kelly, as well as the tenures of Rex Tillerson and H. R. McMaster and Reince Priebus, among others, it just might not last.

Mattis has widely been viewed as an immovable force: kept on in a new administration if the president were somehow forced from power.

Now he might be out by years’ end, three sources familiar with the matter say.

If Michael Wolff is to believed, the only person on the planet the president sees as above him is Rupert Murdoch.

But entertained as peers are generation-leading generals like Mattis and Kelly.

But a Defense Department source says that Mattis, once essentially bulletproof with 45, is imperiled as never before.

“It’s no secret the secretary doesn’t think much of Ambassador Bolton,” says a White House official.

Indeed, as I reported in March, Mattis attempted to block Bolton from his current post.

While both are too smart to allow this to descend into an outright, public scrum, Bolton is poised to twist the knife where he can.

The National Interest reported exclusively last week that Bolton was seeking to hire Mira Ricardel, a Commerce aide whom Mattis holds in low esteem and blocked at the DOD in 2017.

Last Friday, the White House signed off on the installation of Ricardel as his deputy.

The JCPOA (the Iran deal) could be dead and buried before Memorial Day.

Mattis said yesterday, about a deal Trump calls the worst in history, that the inspection regime the Iranians are subject to is “pretty robust.”

For a White House that doubles daily as Shakespearean drama, one of the more buried ironies is that Mattis has emerged as perhaps the administration’s leading Iran dove. Mattis was forced from uniform by Obama because he was perceived as an Iran obsessive out for revenge against Tehran—as a military commander in the Iraq War, he sent American men and women to die at the hands of murderous Shia militias backed by Tehran.

“Iran, Iran, Iran” is what Mattis, as a retired general, once famously said was wrong with the Middle East.

Mattis is no “restrainer”—he’s the frontman behind the largest defense spending increase since the Bush administration, as well as the mascot for a robust, new Authorization for Military Force (AUMF) quietly being pushed by Sen. Bob Corker’s office.

Mattis could be quietly trying to solidify legacy items in case he’s on his way out—the AUMF, generous financing of the Pentagon and preserving something like that looks the Iran deal.

A senior aide to a prominent Democratic senator told me it was Mattis who killed a surprisingly robust challenge last month to America’s support for the Saudi war on Yemen. He traveled from the Pentagon to attend both the Democratic and Republican Senate luncheons on the day of the vote; given Mattis’ popularity on the Hill, the die was cast.

In addition, officials on their way out often warn of coming crises. Obama warned Trump that his first term could be defined by North Korea. On Thursday, Mattis talked openly of a new conflagration in the Middle East. Direct military confrontation between Israel and Iran is now “likely,” Mattis said in Washington.