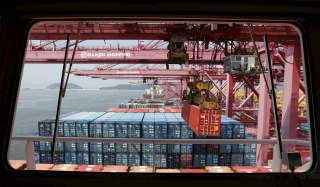 South Korea is faced with a renegotiation of its Free Trade Agreement with the United States (KORUS FTA) at the worst possible time. Given the actions of North Korea, the Korea-U.S. alliance needs to both steadfast and indivisible. The U.S. administration’s attack on the KORUS FTA on the grounds that that the American bilateral-trade deficit between the two countries has grown since it came into effect casts a huge shadow over the relationship.

Most pundits, especially the trade experts, point to the fact that the trade deficit is not the full story. “Look at the current account,” they say, or they point out that the bilateral-trade deficit is not a policy variable, which is also correct, or that Korea has invested millions to create plants in the United States and alongside this significant jobs. All this is well and good, and could perhaps be useful in discussions with a normal administration under normal times. But we live in abnormal circumstances in which all job losses are attributed to trade and in which trade deficits are equated with unfairness.

Of course, there are always invisible trade barriers that can be detected by U.S. firms seeking entry into Korea, just as there are a few instances where Korea has been accused of dumping certain products. Overall, these are small and not the significant cause of the bilateral deficit. However, this argument with the United States cannot be won on technocratic grounds. And I would argue that the solution lies not in renegotiating the FTA, but rather outside of it.

It is a fact that Korea owes a large measure of its export-led development success to traditionally open America markets. Politics now obliges Korea look beyond the letter of the law and make it possible for the White House to claim some victory in its admittedly unjustified claims of unfairness. South Korea needs to see this administration the way it views China’s leadership—prickly, difficult to deal with, and too large to antagonize.

If the solution is the announcement of further investments in the United States or long-term supply contracts for imported energy—or even a government fleet of U.S. cars—then these gestures are worth far more than their direct cost to the Moon Jae-in administration. The counterargument often put forward by responsible and thoughtful Korean scholars is that this is wrong and will not be well received by the Korean public. But, frankly, China’s closing of Lotte Department stores on fake grounds to show displeasure at THAAD did not provoke public demonstrations in Seoul. Why? Because what else can you expect from China. That same view needs to adopted towards this very peculiar U.S. administration. Realpolitik demands it and the cost of sticking to technocratic solutions is far too high.