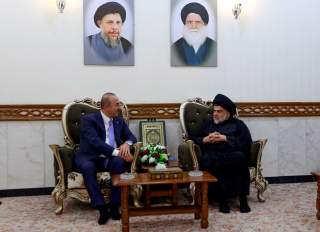 In recent weeks, America’s impending disengagement from Syria has sparked several conflicting views on its repercussions. With the mission to defeat ISIS left unfinished, some argue that the security vacuum will be quickly filled by Iran and Russia. What is becoming increasingly clear, however, is that rather than abandoning coalition objectives, President Donald Trump’s move may signal a subcontracting of anti-terror operations to Turkey. And, additionally, an opportunity for Turkey to extend its influence further.

As the political representative for Iraqi Shia cleric Moqtada al-Sadr, Dhiaa Al Asadi, tweeted: “Has the unaccomplished US Middle East Project been sub-contracted? Do we still keep the recorded history of the Ottomans and Safavids close at hand? We may need to revisit it soon.”

In other words, for many Middle East watchers, the arena has been left once again to two historical rivals. If in the past it was the Ottoman and Safavid empires vying for hegemony over the region, today it may be Ankara and Tehran competing.

Calls for a more robust Turkish engagement in the region are not new. Since the U.S.-led invasion of Iraq in 2003, these calls came mostly from neighboring Arab states fearful of Iran’s growing influence. The calls dissipated somewhat with the deterioration of relations between Turkey and Gulf Arab states, but there is a renewed interest of late for a larger Turkish role, particularly from marginalized Sunni communities in Iraq.

But how will this play out? The withdrawal from Syria dealt another blow to declining U.S. influence in Baghdad, and the infuriating comment by Trump that he will keep troops in Iraq “because I want to be able to watch Iran” may hasten the day when Iraq—not Trump—demands their withdrawal. In this environment, can—and should—Turkey amplify its influence in Iraq? Who will win “hearts and minds?” Turkey or Iran?

Reports claim Iran’s influence in Iraq is waning. Some surveys show a marked decline in Iraqi Shia who have favorable attitudes towards Iran. For example, according to a poll conducted by Alustakilla (IIACSS), 88 percent of participants in 2015 supported Iran, but that number had declined to 47 percent by 2018. The major reason for this decline is a perception that the Iraqi government, controlled by Iranian-backed Shia parties, has failed to improve living standards. Additionally, some interpreted the overwhelming parliamentary victory of the Sadrist bloc (which opposes all foreign influence in the country) as a sign that Iran is losing sway in Iraq.

Yet far more reports suggest that Iran’s influence has not only grown but its presence is now firmly entrenched in Iraq. As one analyst puts it, this presence has led to the “the Iranification of Iraq.”

In either case, there appears to be a consensus that Iran has defeated the United States in the battle for influence in Iraq. As one pundit wrote in Al Jazeera: “Iran's recent victory against the US and Saudi Arabia in the Iraqi political landscape is first and foremost a result of the trust it has built in the country over decades.”

While marginalized Sunni minorities may be calling on Turkey to help mitigate Iran’s influence, more influential Iraqi political parties seem willing to tolerate Iranian influence as an alternative to U.S. hegemony. Even the Sadrists, despite the hype, are not as antagonistic to Tehran as assumed. Yet, sotto voce, there is a fear among Iraqis that this benign influence may portend a future of not-so-benevolent interference.

So where does this leave Turkey?

Diplomacy and Cooperation, Not Demands and Threats

Into this muddle, Turkey is well positioned to provide a helpful role by replacing an antagonistic United States by a less aggressive neighbor. According to high level sources in Ankara, part of the U.S.-Turkey agreement over Syria included an understanding that Turkey would try to moderate Tehran’s expansionist agenda in the region. Yet, a Turkish strategy of non-confrontational diplomatic cooperation and beneficial trade could achieve far more.

Turkey’s former ambassador to Iraq and Iran, Selim Karaosmanoglu, agrees with this view.

“Asking an enlarged role from Ankara would entail greater security and political risks. This would fuel additional apprehension in the region vis-a-vis Turkey (but) to counter such an adverse climate, Turkish policymakers should utilize Turkey’s soft power, starting in Iraq. In Baghdad it’s been accepted and believed that Turkey is sincere in propagating sovereignty and the political unity of Iraq.”

Unlike regional outsiders, Turkey is seen as neutral and large enough to be influential but small enough to be non-confrontational. Iraq is surrounded by few (if any) friends and allies, rather by suspicious capitals seeking self-interested alignments. In contrast, Turkey has little to fear from Iraq or its neighbors, and Ankara’s significant influence in the wider region provides an enviable role as an honest broker.

Through these diplomatic efforts, Turkey can help bring Iraq back into the “family of nations.” Recent years have seen Ankara play a greater role in mediation, as it finds itself either at the center or on the peripheries of most of the world’s conflicts, whether it is in the Balkans, Syria, Iraq, Egypt, Libya or the Caucasus. Last November, Turkey’s President Recep Tayyip Erdogan even offered to play a mediator role in the Russia-Ukraine crisis.

As for Iran, diplomatic relations have warmed over the past year. Close cooperation in the Astana process and Turkey’s waiver to purchase sanctioned oil from Iran gives Ankara leverage with Tehran. Instead of a risky U.S. strategy of confrontation, Turkey is better positioned to enhance its influence through dialogue and trade.

Conversely, that could backfire if Turkey chooses to play a more aggressive role in Iraq. As one Iraqi politician close to the Dawa Party said: “Iran would never sit quietly if Turkey decided to play major role in Iraq. Iran is deeply [involved], it has many militias connected and loyal to Iran and could play a decisive role if the government decided to be neutral in such a Turkey-Iran competition.”

He added: “As the main power is in the hands of the Shia majority, Turkey will gain nothing but continuous losses in Iraq politically and economically and perhaps even in security as the PKK could be activated as a card of pressure against Turkey.”

“It would be unwise of Turkey’s (usually wise) foreign policies to be thrust into confrontation with Iran or any neighbor country,” he said. “What Turkey can do (and what is expected) is to act as a mediator and a problem solver in a region full of problems.”

An Opportunity for Beneficial Trade

Trade and investment are also areas where Turkey can compete and cooperate. It enjoys a sizeable presence in Iraq’s construction industry and the demand for new construction—both in ISIS-ravaged cities and alongside a burgeoning economy. Ankara has already signaled that it’s ready to help rebuild with Turkey’s Foreign Minister Mevlut Cavusoglu unveiling a $5 billion credit package for Turkish businesses working in Iraq.

The defense market is another area for opportunity. As the United States withdraws both its forces and its massive financial support, the still-growing Iraqi Security Forces will need the full range of intelligence gathering equipment, vehicles, weapon systems, individual soldier gear and a host of other items where the growing Turkish defense industry can fill in—with equivalent quality at a lower cost.

In defense services, the Turkish military enjoys a distinct advantage given its years of fighting terrorism inside of Turkey. As the Iraqi security forces—especially its elite counterterrorism forces—will need ongoing training, Turkish military experts are more than capable of replacing the outgoing U.S. specialists. Importantly, providing these defense capabilities to Iraq can be done in a manner non-threatening to the region.

In concluding their thoughts, many analysts assert that Turkey offers an ideal opportunity to replace declining U.S. influence in Iraq while enhancing relations with Iran. Its geographical position, its diplomatic heft and growing commercial trade allow it to promote goodwill and enhance relations with Baghdad. It can increase that influence with its a unique advantage in taking regional considerations into account. Importantly, it can do so by competition and cooperation, without saber-rattling and threats, and in a manner that leads to greater stability and security—to the benefit of Turkey and Iraq, and perhaps as a model for other opportunities in the future.