Could the U.S. Navy Replace Ships Fast Enough in a War with China? 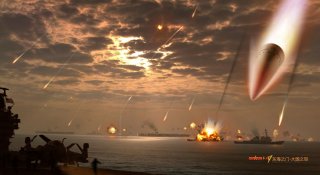 Among the document’s money quotes: “Replacing ships lost in combat will be problematic, inasmuch as our industrial base has shrunk, while peer adversaries have expanded their shipbuilding capacity. In an extended conflict, the United States will be on the losing end of a production race—reversing the advantage we had in World War II when we last fought a peer competitor.” This is incontestable. In the Pacific, for instance, the U.S. economy was nine or ten times the size of Japan’s. Industry was already roaring by the time the United States entered the war. After all, the nation had commenced riveting together what amounted to a second complete U.S. Navy under the Two-Ocean Navy Act of 1940. That isn’t the case today.

General Berger may sound like a Cassandra spinning lurid prophesies. But remember, the Greek god Apollo blessed Cassandra with the gift of foresight. Her prophesies were accurate. Her curse—also courtesy of Apollo, whose amorous overtures she had rebuffed—was that no one ever believed her words, no matter how prescient they were.

One hopes Commandant Berger finds a more receptive audience. His chances are better than Cassandra’s. Like the mythical soothsayer, he is no stranger to stark forecasts. Unlike her, he wields substantial authority. He can impose his views on the Marine Corps for the most part. He enjoys a bully pulpit vis-à-vis the Pentagon and Congress, and he uses it to hold forth. Almost immediately after assuming his post last summer, Berger released Commandant’s Planning Guidance that scrapped cherished shibboleths. For instance, dogma long held that the U.S. Navy must operate thirty-eight lumbering amphibious transports to ferry sea soldiers to the shores of Tripoli or other distant battlegrounds in numbers large enough to accomplish their goals. Yet large surface vessels are increasingly vulnerable to shore missile batteries, missile-armed aircraft flying from airfields on land, and submarines and surface craft sporting anti-ship missiles of their own.

Traditional ways of amphibious warfare are less and less tenable.

Rather than cling to the past, says Berger, the U.S. Marine Corps and Navy should put their trust in swarms of lighter, fleet-of-foot yet heavy-hitting craft suitable for “standing in” within the PLA’s Western Pacific weapons engagement zone. Losing a big ship constitutes a major setback for a fleet made up of a few big ships. It subtracts a major percentage from the force’s aggregate fighting power. A fleet abounding in winsome ships, by contrast, can lose one or a few in action yet fight on. Each vessel embodies only a small fraction of the fleet’s fighting strength. It is expendable.

Marine “littoral regiments” embarked in stand-in vessels will flit from island to island, lofting anti-ship and anti-air missiles the PLA’s way in a fight. If successful the joint force will seal the first island chain to Chinese maritime movement—cramping China’s export-driven economy along with the PLA’s capacity to project military power outward. They will bring some pain. Robust capability backed by obvious willpower to use it may deter Beijing. Or, should deterrence crumple, resilient capability will bolster the sea services’ prospects of prevailing in action.

Two thoughts from masters of politics and strategy, old and new. First an old commentator. Berger is making a point about U.S. grand strategy with which maritime sage Alfred Thayer Mahan would wholeheartedly agree. In the nautical realm, peacetime grand strategy means marshaling national resources to fit out ships and other implements of maritime might. Mahan catalogs the “number of population” and “character and policy of government” among six determinants of a society’s fitness for sea power. America is standing into danger if it no longer meets these Mahanian standards.

By the number of population Mahan means more than raw numbers of people. He means a society needs the right demographic mix, including a critical mass of specialists in industries relating to the sea. And so it does. Great Britain commonly outfaced France at sea during the age of sail, even though the British Isles were home to fewer citizens. Yet Britons were more plentiful in trades necessary to field merchant and naval fleets. France had to worry about land defense and, oftentimes, was ruled by kings with a penchant for offensive land warfare. Royal preferences multiplied the demands on tradesmen while distracting the kingdom from seaward ventures. As an island state with its own moat, Britain had the luxury of concentrating on marine pursuits.

Britons were fewer in numbers than the French on the whole—but they outnumbered their ancient rival in sectors that mattered.

Try a thought experiment. Mahan might ask: who is playing the role of Great Britain in the U.S.-China competition, and who is France? Mahan hoped the United States would emulate Britain, the gold standard for sea power in his day. Does it still measure up by Mahanian indices? Or perhaps Communist China is supplanting the United States by some measures. Or maybe there’s a hybrid answer. It could be that America is Britain in that it operates the better fighting fleet and that America is France in that it can no longer manufacture ships, planes, and armaments in bulk, in quick time, to replace battle casualties.

The latter conforms to Berger’s critique.

A seafaring society without a vibrant shipbuilding industry (along with aerospace firms, weapons firms, and associated trappings of modern marine strategy) is a brittle seafaring society. It cannot take a flurry of heavy blows from a peer pugilist and counterpunch for long. Even a weaker antagonist able to regain its strength swiftly after an initial shock commands a significant advantage in a prolonged struggle. If the United States has let its sea power turn brittle, officialdom in Washington DC has soul searching to do and laws and policies to revise. The shade of Mahan would instruct them to get cracking.

Let a modern commentator have the last word. A few years ago trader and probability guru Nassim Nicholas Taleb published Antifragile, the capstone volume in a series of books investigating the nature and consequences of highly improbable events. (Among the series The Black Swan garnered arguably the most fame among military folk.) In Taleb’s parlance General Berger seems to be urging stewards of strategy to restore resiliency to the U.S. maritime sector. On the operational level, fielding resilient expeditionary forces means fielding forces that can absorb a blow, shake it off, and continue fighting. Hence the trend toward a fleet design centered more numerous platforms, none of them inordinately precious.

On the grand-strategic level, making maritime industry resilient means upgrading shipyards and other defense-related infrastructure—along with the affiliated workforce—so that stricken vessels can be repaired or replaced in a hurry. The sea services will find new staying power once industry can readily replenish matériel lost in battle. That’s what the commandant means by regenerating combat power after a tussle.

Taleb gives resiliency its due—better resilient than fragile—but he thinks it is possible to design systems that go beyond it. Resiliency implies restoring a system to the capability and capacity it boasted before absorbing damage. “Anti-fragile” systems, he postulates, can not just withstand a shock; they positively benefit from the resulting disorder. They take a heavy hit and come back better and stronger than before. How does this insight apply to fleet design? It affirms the trend toward lighter, simpler combatant and amphibious ships. If American yards can produce new generations of vessels in bulk and in haste, it may be possible to improve each generation as feedback comes in from the combat zone detailing what does and doesn’t work in action against this particular foe.

New-construction vessels will be better—and better fitted to tactical and operational circumstances—than the ones they replace.

Bottom line, General Berger may be righter than he knows about the incipient new mode of sea combat. There may be a lesson from aviation history. Think about the dizzying array of combat aircraft designed and built during World War II. New generations of warbirds replaced old in quick succession. The air arm was an anti-fragile force. But building even a technologically advanced plane is straightforward by contrast with building a massive, intricate ship of war. If ships were smaller and easier to construct—if they were more like aircraft—then manufacturing a ship would come to resemble manufacturing an airplane. Fast design improvements would become thinkable even as mass production replenished numbers of hulls. Let’s revivify the marine industrial base—and put it to work laying the keels for an anti-fragile fleet.

The commandant is a Cassandra worth heeding.