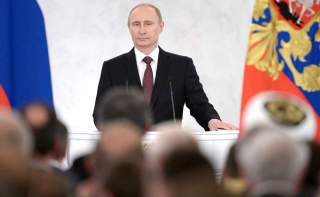 At first glance, recent public opinion surveys in Russia and the United States paint a gloomy picture on the state of U.S.-Russia relations. Mutual favorability ratings are at their lowest levels since the end of the Cold War, and each public shows significant distrust toward the other. Some sobering numbers: Three in four Russians disapprove of the U.S. approach to international problem-solving, and 55 percent of Americans believe that relations between the United States and Russia are worsening. And that was before the alleged Russian interference in the U.S. election, which the CIA believes to be true.

But could another “reset” and revived cooperation drive these numbers in the opposite direction?

Not so fast. While data show that an improving tenor in official relations could lead Russians to warm to the United States, American public opinion may be more resistant. Sustained news about alleged Russian hacking, Moscow’s safe harbor to Edward Snowden and Russia’s state-sponsored doping scandal – in addition to Putin’s low favorability ratings among Americans – means that there will likely still be considerable bipartisan support in Congress for containing Russia.

The View from Russia

The Trump-Putin relationship probably means more to Russians than to Americans at this point, since Trump has yet to be inaugurated and his intentions for the world stage are still unclear. According to a November poll by the Levada-Center, the Russian public seems optimistic about the outcome of the U.S. presidential election. Sixty percent of Russians think Trump is a better president for Russia compared to 5 percent for Hillary Clinton. Of those Russians who favored Trump, 63 percent said he is preferable because he is friendlier to Russia than Clinton. The same poll found that 54 percent of Russians think that the U.S.-Russian relationship will improve after Trump’s victory. Russia’s political elite has also praised Trump’s victory. Upon hearing the news that Trump won the election, the Duma purportedly burst into applause. The day after the election, Russia’s two largest stock markets gained almost 2 percent.

Close personal connections have played a significant role in establishing trust between Putin and previous European leaders, such as German Chancellor Gerhard Schroeder, Italian Prime Minister Silvio Berlusconi and French President Jacques Chirac. But some analysts advise caution in predicting the longevity of the Trump-Putin bromance. Georgy Bovt recently warned that the relationship could deteriorate quickly given Trump’s bombastic nature. Others are waiting to see Trump’s full cabinet because—as Dmitri Trenin recently emphasized—Trump’s inexperience makes his cabinet picks all the more influential. Evgeny Minchenko has pointed out that Trump’s secretary of defense choice, James Mattis, is no friend to Russia. However, Trump’s nominee for secretary of state, Rex Tillerson, is a strong advocate of lifting the sanctions on Russia and improving U.S.-Russian relations.

The View from the United States

A change in U.S. leadership is not likely to reverse American distrust toward Russia, nor is it likely to appease American critics of Russian foreign policy. Despite Trump’s dismissal of Russia’s involvement, Republican senators Mitch McConnell, John McCain, Lindsay Graham and Marco Rubio support further congressional investigations into Russia’s alleged involvement in trying to skew the U.S. elections, as do many Democrats. A Bloomberg poll conducted in August of this year found that 69 percent of Americans are bothered by Trump’s praise for Putin (42 percent bothered a lot, 27 percent bothered a little, and 27 percent bothered not at all), and 64 percent of Americans view Putin unfavorably versus 10 percent who view him favorably. Only 43 percent of Americans viewed increased Russian world leadership as desirable in the 2015 Chicago Council Survey. And Trump himself will likely enter the White House with a relatively low approval rating compared to past presidents, though his support, now at 47 percent, has risen somewhat since the election.

For Americans, public opinion of Russia soured after the annexation of Crimea in 2014. The Chicago Council Survey found that while Americans were not enthusiastic about using U.S. troops to defend the territorial integrity of Ukraine in 2014 (only 30 percent supported doing so), the U.S. perception of Russia that year dropped to its lowest level since the end of the Cold War. The American public’s temperature rating of Russia dropped to 36 degrees (out of a possible one hundred) in 2014 and has not increased above forty degrees since. A CBS News poll found that Americans who view Russia as either an ally or a friendly country fell from 68 percent in March 2007 to just 36 percent by June 2014. And Pew surveys showed that American public support for increasing sanctions against Russia rose from 53 percent in April 2014 to 60 percent in February 2015.

The most promising opportunity for improving the U.S.-Russian relationship is renewed bilateral cooperation on Syria. Cooperation broke down after the failed ceasefire in September and after Obama signed a letter with the leaders of Germany, France, Britain, Canada and Italy condemning Syria and Russia for their actions in Aleppo. Still, Russian Foreign Minister Sergei Lavrov and Secretary Kerry have met in Hamburg to negotiate a deal on the evacuation of Aleppo, which the Syrian government appears to be on the brink of taking. Yet 64 percent of Americans believe that the United States and Russia are working in different directions to end the conflict in Syria. And while the 2016 Chicago Council Survey shows that Americans are more likely to say that the United States should cooperate with Russia rather than actively working to limit its power, self-described Republicans (50 percent) and core Trump supporters (47 percent) are less likely to favor cooperation than Democrats (62 percent), which may limit Trump’s options.

Another possibility, less likely, is that Trump could recognize, either explicitly or implicitly, Crimea as part of the Russian Federation and/or remove the sanctions placed on Russia as a result of Crimea’s annexation—actions he said he would consider during his campaign. At one point, Trump vaguely condoned the Crimean annexation, saying: “The people of Crimea, from what I’ve heard, would rather be with Russia than where they were.” While it is possible for a U.S. president to lift sanctions via executive order, it is also likely that Republicans in Congress would oppose removing the sanctions, curtailing Trump’s veto power. EU sanctions would remain in place, although France’s center-right candidate François Fillon has also expressed his interest in lifting sanctions. And German Chancellor Angela Merkel, who has been strong on sanctions, has a tough reelection fight ahead of her.

At this stage for the relationship, there are more known unknowns than known knowns – to paraphrase another famous Donald. Ironically, over the past eight years, GOP stalwarts have criticized the Obama administration for engaging Moscow on a range of geopolitical issues, such as the 2010 “reset” and New START. Since Tillerson was leaked as the top contender for secretary of state, the media has been speculating that Congress will thwart his nomination. A realization of Trump’s campaign rhetoric on warming relations with Russia—a departure from traditional Republican hawkishness toward the big bear—would take us into new territory. Even as Russia cheers, it’s unclear the American people would support that.

Stepan Goncharov is a sociologist at the Levada Analytical Center in Russia. Dina Smeltz is a senior fellow on public opinion and foreign policy at the Chicago Council on Global Affairs. Lily Wojtowicz is an intern at the Council. The Council on Global Affairs and the Levada-Center published a joint report in November on polling conducted independently by each organization.