Could the Violent Protests in Hong Kong Backfire? 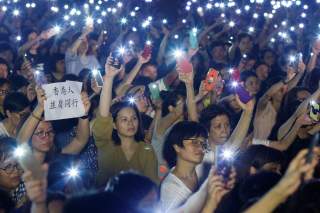 A July 1 protest is nothing new for Hong Kong. That’s the anniversary of Britain’s handover of Hong Kong to China.

But this year, the protest turned violent—a sharp contrast to the largely peaceful protests that had taken place in the weeks preceding, when millions of people took to the streets to oppose a proposed extradition law that would permit individuals to be sent to China at Beijing’s bidding.

But things changed on July 1. Masked protestors broke into the LegCo building, graffitied the walls, and engaged in largely destructive and pointless behavior. Such actions undermine the original purpose of the June protests that sought to safeguard and uphold the rule of law.

Martin Lee, one of the chief architects of Hong Kong’s Basic Law which governs the semi-autonomous region after its handover to Beijing, poignantly wrote in the Washington Post: There is no extradition law because there is no rule of law in China, where the Chinese Communist Party dictates who is innocent and who is guilty.

Rule of law is, in fact, central to why protestors originally took to the streets, so to diverge from upholding it themselves, is to do their cause a major disservice.

To be clear, if the proposed extradition law were passed, then it would have severe consequences for freedom in Hong Kong. Even without an extradition law, Hong Kong booksellers, outspoken political advocates, and others have already been kidnapped or forcibly disappeared by Beijing authorities. This kidnapping would be essentially legalized were the bill to become law and would have broad-sweeping effects for the freedom to do business in Hong Kong.

The threat wouldn’t be limited to Hong Kongers. It would extend to the large community of foreign businessmen and businesswomen operating in Hong Kong--including the more than eighty-five thousand Americans currently working there.

The extradition law’s threat to Hong Kong’s economic freedom was one reason why the Hong Kong protesters initially enjoyed massive support from the international community. Secretary Mike Pompeo expressed concerns about the law’s potential passage and several members of Congress raised their voices to defend freedom there.

Now, however, protestors risk overplaying their hand and losing the good graces of the international community—graces they will need in the future, since this is far from the last time that freedom in Hong Kong will be in jeopardy.

Under the Basic Law, Hong Kong is set to fall fully under Beijing’s control in 2047. That approaching deadline is what has many Hong Kongers fearing for their—and their children’s—future. The intensity of the protests arises, in part, because the generation that will unquestionably be alive when the handover takes place in 2047 is now coming of age.

Broad consensus exists among young and old on the need to preserve freedom in Hong Kong, but perhaps there is not consensus on the best methods for doing so. Building goodwill and coordination among the various stakeholders in Hong Kong—young and old, businessperson and lay person, religious and nonreligious—is critical to crystallizing efforts to promote freedom.

The world looked on in awe at the scale and scope of June’s peaceful protests. That so many people could come out and that peace should prevail was part of what made those protests remarkable. This turn toward violence is souring those initially positive impressions.

Hong Kongers should be encouraged in their peaceful efforts to secure freedom, but they should refrain from committing violent acts, or from continuing protests that lose focus on the reasons they came out in the first place. Straying from the original goal of freedom preservation and promotion will, no doubt, have deleterious ends.