Could You Win the Cold War? 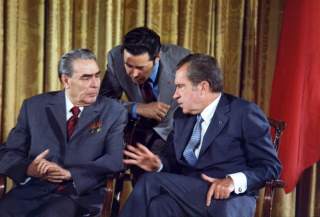 Perhaps it's wrong to be nostalgic for thermonuclear annihilation, but there are times when I miss the Cold War. Yes, it was a nerve-wracking time when life on Earth hovered thirty minutes away from near-extinction, and ordinary Americans and Russians went about their lives knowing that the Bomb could suddenly end them.

But at least the Cold War was predictable. It may have been the cold predictability of Mutual Assured Destruction, and stupidity and recklessness could have triggered Armageddon by mistake, yet we all knew that neither side would deliberately commit suicide. "Better dead than Red," and "We will bury you," vowed the antagonists, but that didn't stop Nixon from meeting with Brezhnev or Reagan with Gorbachev.

That predictability often led the Cold War to be compared to chess, or the Cuban Missile Crisis to poker. So it's fitting that someone has made a board game out the Cold War, and one that is regarded as one of the best strategy games ever made. Twilight Struggle puts two players into the shoes of the rival superpowers from 1945 to 1990.

Twilight Struggle is a mixture of chess, Risk and poker. The game consists of a roughly two-foot by three-foot board, a deck of 110 Event cards, and 260 small cardboard tokens (colored blue for the U.S. and red for Russia, of course). The board shows a map of the world with each nation depicted as a box, and with transportation routes connecting various nations. Each nation (except the U.S. and USSR) has a Stability number, from the Stability level 5 of Britain (rock-solid government) to the Stability 1 of many African nations (new El Presidente/Field Marshal/Supreme Leader every Tuesday and Thursday, holidays excepted). Certain nations, such as East and West Germany, India and South Korea, are marked as Battleground states that count extra for scoring.

Players gain Influence points, and various other goodies, from the deck of Event cards. Each turn, players have six to eight cards in their hand that they alternate playing one by one with the Soviets throwing down the first card in each of the game's eight turns. Each Event card is marked with an actual event from the Cold War. There are a variety of cards, from "Korean War" and "Eastern European Revolts", to "Brezhnev Doctrine" and "Iran-Contra Scandal." These events, which usually favor either the American or Russians, mostly boil down to one player placing Influence markers in designated countries, or removing his opponent's Influence. An interesting, if frustrating, twist is that players must use all but one of the cards in their hands, which often means laying down a card that favors their opponent. Twilight Struggle's greatest moments include watching the Soviet player's face as he lays down the Marshall Plan event (extra American Influence points in seven Western European nations), or when the Americans must play the "Castro takes power" card.

Instead of an Event, each card can also be played for Operations points, which are the political-military currency of Twilight Struggle. Ops points can be spent to place Influence markers in countries, with the proviso that the target nation must be connected by a transportation route to a country where you already have influence. That last point makes a big difference. Algeria and Turkey, for example, are gateways from Europe into North Africa and the Middle East. No country in Latin America begins the game with any Soviet Influence, so Moscow can't spread Marxist gospel there until the Castro card turns Cuba into a Communist beachhead.

But who plays Twilight Struggle just to make Voice of America broadcasts or hand out copies of Das Kapital? A Cold War game wouldn't be Cold War-ish without a paramilitary angle. Thus Cold Warriors can spend Ops points to conduct coups, which turn an enemy-controlled nation into a member of your bloc. The chances of success depend on a roll of a die, with stable nations like Sweden hard to flip, while most Middle Eastern nations change sides as easily as a snake sheds its skin.

Yet be warned: coups are nuclear dynamite. On the Twilight Struggle board is printed the Defcon Track, which goes from Defcon 5 (lowest) to Defcon 1 (boom!). Every time a player conducts a coup, or various other actions specified by Event cards, the Defcon level worsens. Whoever goes over the edge and triggers thermonuclear war loses the game (not that his opponent will be any happier). The only real winner are the radioactive cockroaches that will inherit the Earth.

Thus, like the historical counterparts, the players must temper aggressiveness with caution. Assuming the insects don't end up ruling the world by the eighth turn, victory is determined by Victory Points, which are tracked by moving a marker on a track that runs from +20 net Soviet VPs (automatic Soviet win) to -20 (automatic U.S. win). Within the card deck are several Scoring cards for various regions of the world, such as Europe and Asia. When that card is played, players receives VPs depending on whether they have Presence, Domination or Control of a region. For Presence, the U.S. or USSR just needs to own a single nation in the region. Domination, and best-scoring of all, Control depend on who has the most nations and the most Battleground nations. Thus the U.S. could own most nations in Western Europe, but if it doesn't own Battleground states such as West Germany and Italy, it doesn't score many points.

Players can also score VPs by playing cards for the Space Race. Dice are rolled to see who can be the first to achieve a series of space spectaculars, such as "First Man in Space" and "Eagle/Bear has Landed", for VPs.

Like the Cold War it portrays, Twilight Struggle is divided into phases. At the beginning of the game, the players draw from the Early War deck of cards, which covers the 1950s. The basic American goal at this stage is survival. The Early War cards tend to favor with the Soviets, with such Yankee Doodle nightmares as "Vietnam Revolts," "Nasser" and (most annoying of all) "De Gaulle Leads France." The Americans get a few zingers—"Eastern European Unrest," "U.S./Japan Mutual Protection Pact"—but as the Communists would say, historical forces are turning against capitalism.

In the middle of the game, the Mid-War Event deck is shuffled in, encompassing the 1960s and 1970s. The cards are a bit more balanced, with cards like "U-2 Incident" and "Willi Brandt" (Soviets gain Influence in West Germany) offset by "Grain Sales to Soviets" and "Camp David Accords." If the Soviets haven't won or scored by the time the Late Wars cards are added in, they've got problems with cards like "Tear Down This Wall" (U.S. plops 3 Influence points into East Germany).

Players who expect a literal recreation of the Cold War will be disappointed. It is virtually certain that the game will deviate from actual history. Purists might find the history a little too loose at times. For example, it's possible that NATO and the Warsaw Pact will never come into existence. Yet the randomness of drawing Event cards makes every game of Twilight Struggle fresh and exciting.

Great historical games like Twilight Struggle are great not because they are literal historical simulations—who would want to play Germany in a World War II game if you knew you were going to lose—but rather because they capture the essence of an historical era. Twilight Struggle is fascinating as a depiction of the Cold War mindset. The game is pure zero-sum; when America gains, Russia loses, and vice-versa. The theme is not the internationalism of Woodrow Wilson or Franklin Roosevelt. It's the grim worldview of John Foster Dulles or the power politics of Henry Kissinger.

This precisely captures the rigidities and self-fulfilling prophecies of that era. Everything—and I mean everything—in Twilight Struggle is reduced to a tool in the superpower conflict. Are Third World liberation movements nationalists fighting for the right not be ruled from Paris or London or Lisbon? Nope, they're Commie stooges whose every success is another step in the Kremlin's plot for world domination. What about American foreign aid or support for democratic reforms? Yup, they’re just another capitalist plot to oppress the workers and peasants, or encircle the Socialist Motherland.

Nearly thirty years after the Berlin Wall fell, much of this paradigm looks wrong, and even paranoid. Nonetheless, the game illustrates how people viewed the world at the time. Of course, this cutthroat philosophy just happens to be the fabric of gaming, which is about winners and losers. Thus the geopolitical conflict of the Cold War makes for an ideal contest that can be finished in three hours or less over a kitchen table.