Countdown to Pearl Harbor: The Twelve Days to the Attack 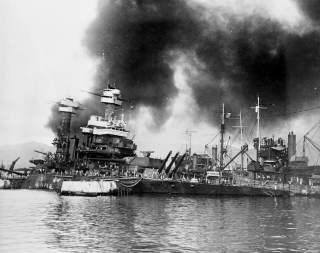 Editor’s Note: The following was reprinted from Countdown to Pearl Harbor: The Twelve Days to the Attack by Steve Twomey. Copyright © 2016. Available from Simon & Schuster.

As the Ward was plying through the second hour of Outerbridge’s first day, a civilian scampered to the second deck of the Submarine Building, leaving his wife waiting in a rental car below. He probably noticed the array of seven states in their Battleship Row; observing was what he did in life. Joseph C. Harsch was a reporter for the Christian Science Monitor with a Gump-like knack for popping up where big events were about to happen. His memoirs would be called At the Hinge of History. For a good portion of the last two years, Harsch’s turf had been western Europe, writing of Nazi conquest and fascist rallies. Now his newspaper wanted him in Moscow to record the Soviet side of the Eastern Front, and he was taking the long way, west across the United States, then to Oahu, then to Tokyo, then on.

Harsch, who was thirty-six, had arrived Wednesday aboard the Lurline with his wife, Anne. Their goal was a few days of Hawaiian interlude, but after just two, the journalist in Harsch had stirred. There had to be a good interview at that naval base down the coast from his hotel at Waikiki Beach, and when he called Kimmel’s headquarters, he was told to stop by the very next morning.

Entering the commander in chief’s office, Harsch found him and much of his staff arrayed in a circle, seemingly quite relaxed—Kimmel had plopped his white buckskins on a coffee table—and ready to interview him. Here was a knowledgeable visitor from the frontline of war come to remote Hawaii, and therefore he must tell them all about Europe’s struggles, which Harsch began to do. “After about half an hour of being the subject of the questioning, I turned to the admiral and asked if it was my turn to ask a question.” After all, Mrs. Harsch was still waiting downstairs, with swimsuits and a packed picnic lunch for a day of sightseeing. The reporter’s one question to Kimmel was the most pressing one: Would there be war in the Pacific?

“Without a pause, immediately, almost casually, he replied no. His explanation—which I think I remember almost word for word—was the following,” and Kimmel began speaking, not of Japan but of Russia. “Since you have been travelling,” he said to Harsch, “you probably don’t know that as of six days ago, the German high command announced that German armies in Russia had gone into winter quarters.” Endangered Moscow would not fall for now. The Soviets would remain in the war at least until spring. And as long as they did, Japan would not strike their allies, Great Britain and the United States, lest Russia retaliate by attacking the empire. In sum, Kimmel said, “The Japanese are too intelligent to run the risk of a two-front war unnecessarily.”

“I was fascinated,” Harsch said. He did not know if Kimmel was merely brushing away a reportorial gadfly with a lame answer or if he believed what he had said. The journalist examined the faces of the other officers. “They showed no sign of being under strain or pressure. No one on the staff disagreed with what the admiral said about the prospects of war in the Pacific.”

Harsch returned to his wife, and together they spent the day motoring all over Oahu—beaches on one side of the road, pineapple fields on the other—swimming, and eating their picnic lunch. They had no worries “because, after all, the admiral had assured me only that morning that there would be no war in the Pacific. It was a good day.”

Actually, anxiety seemed to have suffused Kimmel at last. Why he picked Saturday to invite a reporter in for a chat is a conundrum. He could hardly have uttered the truth—that there was going to be war in the Pacific—without triggering a second question from Harsch, and a third, and a fourth, about when and where hostilities would start, about the fleet’s strength, its tactics and so on.

To a marine officer that day, Kimmel complained that “his stomach was acting up, because he felt like he did not know the whole story and frankly was worried.” The officer tried to cheer him up, but “Admiral Kimmel was not impressed.” During the entire ten months of his command, he had tailored even the smallest things to his liking, as he had throughout his entire career, whether it was reprimanding a ship that belched too much smoke or hoisting pennants to instruct a formation to “negative scatter.” If two inventories of ammunition stocks disagreed, he could count them himself. If Oahu’s roads were too crowded, rents too high, phones unreliable, he could dress down the Chamber of Commerce. If he did not know Roosevelt’s strategy for containing the empire, he could—as he had in May—insist that Stark eliminate the “uncertainty, a condition which directly contravenes that singleness of purpose and confidence in one’s own course of action so necessary to the conduct of military operations.”

But here was uncertainty that could not be eliminated easily. On Saturday, he could not simply fi off a letter to the Japanese, insisting they disclose what they had in mind. “I sensed the deep feeling of concern and responsibility felt by the admiral,” the marine officer said.

All week, clues of something massive under way, perhaps something crazy, had spilled into the Submarine Building. The Japanese had broken with past practice and changed radio call signs months too soon, hoping to befuddle the Pacific Fleet. Their circuits were now overflowing with traffic. Dozens upon dozens of their ships were moving. Four of their carriers had not been heard from in more than a week, and while Edwin Layton and Joe Rochefort presumed the ships were at home, there were never guarantees when it came to conclusions born of radio traffic.

Further, not only had Main Navy alerted Kimmel to a possible Japanese assault on the American territory of Guam, but he had also just learned that Washington’s invasion fears were spreading to Wake, Midway and other bases closer to Pearl. “In view of the international situation and the exposed position of our outlying Pacific islands,” the department radioed him on Saturday, “you may authorize the destruction by them of secret and confidential documents now or under later conditions of greater emergency.”

After Joseph Harsch and his spouse drove off into tropical leisure, Kimmel gathered with three senior officers to consider whether defensive steps were called for, whether this was, finally, the long-awaited moment when the fleet ought to shift out of training and into serious self-protection. “We didn’t want to overlook anything, you see,” Kimmel said. The Pacific “was growing increasingly critical.”

Tellingly, Walter Short was not among the conferees. While the general and the admiral had conversed since the war warning, the topics involved mostly the outer islands. Kimmel did not know the precise alert level Short had chosen, nor did Short know the navy’s. The navy believed that army radar was scanning, but it had not checked to see if it was, and did not know its hours of operation or that Short was using it only to hone the skills of his radar crews. Asked later if he had queried the general in these hours about whether the army had girded for the worst, Kimmel said, “In the specific terms that you have stated, perhaps not.” He felt Short knew his business. Short felt Kimmel knew his.

It so happened that the previous week, the Naval War College had finished work on the latest edition of Sound Military Decision, an almost-unreadable staple that offered, among other things, advice on coming to the right responses to murky battlefield moments like this one. A commander must evaluate the situation “with intelligent suspicion,” and take into account not only “what the enemy will probably do” but also “everything that the enemy can do.” To assume he will, or will not, take a particular step “may be fraught with the most serious consequences for a commander.”

That was especially true for an outpost. Army or navy bases on the mainland, or civilian leaders in their Washington, DC, offices, did not have to be as watchful as a commander on the frontier. In his forward watchtower, the sentry could not indulge in the luxury of inattention or the assumption that others were taking care of matters. He was there to protect those to the rear, and that started, in Kimmel’s case, with protecting himself, his men, and his ships. If there were no fleet, there would be nothing between the Japanese and the mainland. If there were no fleet, there would be no grand offensive, either. “In the Army,” one general said, “we are taught that in case you have no information, you ought to be prepared for the worst, and in an outpost like Hawaii, they are always supposed to be awake and prepared for anything. That is why it is an outpost, so that people on the Mainland can go to sleep.”